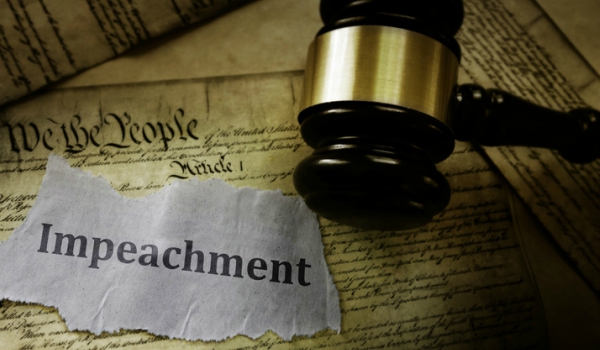 I should put my pundit license into the same status as my law license: inactive.

When I came back, sort of, from my cancer surgery, it was obvious that I could no longer call the coins while they were in the air, as is required of both trial lawyers and judges. Now I’ve sinned against the practice of punditry: I dithered.

We who chatter from the cheap seats are expected to be fearless, and that seems fair when our risks are minimal. Still, I could not make up my mind how I would vote and therefore how I would advise the House of Representatives to vote on the issue of impeachment if the following facts appeared to be true:

*There is probable cause to believe that Donald John Trump is guilty of high crimes and misdemeanors within the meaning of the Constitution. This is actually the easiest of the issues.

*There is enough evidence to convict him of at least one article of impeachment.

*It is highly probable the Senate will not vote to convict President Trump even if he confesses.

*If the House passes articles of impeachment — particularly on a party-line vote — the voters are likely to punish the Democrats, who will then lose control of the House.

The question, to me, is not whether a House member could vote to impeach and defend that decision against all comers, but whether the misconduct plus the proof of misconduct gives rise to a duty to impeach.

If so, it seems to me, that the last issue boils down to party v. country. Not a serious question. I am not a Democrat, but I don’t have to be a Democrat see the spinelessness of the Republicans on all the major issues about which they used to care. Either they changed their minds about everything overnight or they have chosen party over country.

The GOP was the party of free trade.

President Obama left the Trans-Pacific Partnership in the Senate’s “in” basket, and President Trump moved it to the round file.

Of course, it’s true that the major goal of the TPP was not free trade. The goal was to isolate China unless it agreed to the rules everybody else followed. When the TPP died, China rolled right into the vacuum. Those nations that feared China’s sharp practices found it necessary to get dealt into the only game in town.

Before China could seal a new deal, somebody got to Trump, and he is now considering reopening negotiations for a TPP. Nothing like the one Obama negotiated, of course (wink, wink).

Trump did something similar to NAFTA. He announced withdrawal to great fanfare and then set about renegotiating NAFTA with changes everybody agreed was made necessary after road testing the original treaty or by the passage of time.

The United States-Mexico-Canada Agreement (USMCA) was first delayed by Mr. Trump’s talent for picking fights with those nations most unlikely to want a fight. Now it’s negotiated, but the ramifications are flowing like cold molasses because Mr. Trump keeps wanting to use tariffs to settle scores with or coerce the behavior of Mexico and Canada outside of the USMCA.

It’s hard to name a multi-lateral treaty Trump has left alone, but so far most of the impact has fallen on trade because that’s where most of the action is.

The GOP opposed the spread of nuclear weapons.

When he blew up the nuclear deal with Iran, it seemed to slip Mr. Trump’s mind that it is a multilateral treaty. The other parties are the permanent members of the U.N. Security Council plus Germany. Whatever you think of Iran, it still seems self-evident that it is not wise to treat five of the most powerful nations on the planet as if they were furniture in a room containing only Iran and the U.S.

The National Park System and the Environmental Protection Agency were born in Republican administrations and the GOP has always at least paid lip service to the environment.

Which brings me to the worst treaty debacle of Trump’s first term: the Paris Climate Accord. Most of us who shuddered as the 2009 Copenhagen negotiations on the same subject failed were impressed that the Accord de Paris happened at all, even if it was too little and too late.

Mr. Trump was, of course, immune from the despair that emanated from the talks in Denmark, since he takes science to be a matter of belief and if he does not believe in anthropogenic climate change then it’s not happening.

In the Trumpian world, Copenhagen was not a defeat and therefore Paris was not a victory.

The GOP was the nesting place for most serious budget hawks.

In July, Forbes reported that Trump’s budget deficits will total nearly twice Obama’s. After spending decades branding the Democrats the party of tax and spend, the Republicans have become the party of spend and spend.

The GOP led the Cold War charge against the Soviet Union — which is to say Russia — -to the point of waging hot war by proxies and backing most of Sen. Joseph McCarthy’s assault on the Bill of Rights.

Now, we have a Republican president installed by Russia who has done his best to lurch U.S. policies in directions pleasing to Russia, starting with the mysterious about-face in the 2016 Republican platform away from taking Ukraine’s side in the shooting war with Russia set off by Russia’s invasion. Mr. Trump went on to relax U.S. economic sanctions imposed for invading Ukraine and lobby to get Russia re-admitted to the G 7.

Those are substantive policies, the prose of governing. Trump has also offended the GOP traditions in the poetry of running by insulting POWs and Gold Star parents, ridiculing the handicapped and judging women in politics on a scale of one to ten as if governing were like scoring a beauty pageant.

Before Trump, no respectable newspaper would use the word “lie” to describe statements of the POTUS. Now, several publications keep running totals, which seldom agree because of differing methods for determining when an untrue statement is a lie.

The Washington Post claims that Trump’s lie count rolled over 10,000 on April 26 of this year and has continued on the slightly elevated level of 20 lies per day.

It’s not clear that this dirt is impeachable dirt. Most of it was known before the 2016 election. Recognizing that it has gotten worse with impunity, isn’t there a reasonable argument that conducts short of criminal known before the election was cleansed by the result?

It’s not an impeachable offense to be a bad Republican or even a bad president. Or is it?

What if we were circling the drain toward another unnecessary war that could be stopped by impeachment? That’s not easily proven, but the proof is a different issue.

What if the matter circling the drain were our tradition of free and fair elections?

Special Counsel Robert Mueller just spent a great deal of time investigating Russia’s role in the 2016 election. He spent more time than money, because the restitution and fines recovered from the witches nailed by what President Trump called a witch hunt may actually allow the investigation to turn a profit. Even if the fines go unpaid, the property forfeitures are easily enforced.

Trump’s non-cooperation left enough holes in Mueller’s case to prevent a finding of guilty beyond a reasonable doubt against everybody involved, so there are plenty of witches remaining to be burned. Impeachment is not a criminal proceeding, so Trump’s silence could be counted as a circumstance showing guilt. Any henchmen taking the Fifth Amendment could be offered immunity, which makes the Fifth Amendment unavailable.

The issue that set me to dithering about impeachment has gone away with Mr. Trump’s public confession to attempting the same arrangement with Ukraine for 2020 he denied having with Russia in 2016.

A future crime is a different animal from a past crime. I doubt that House Speaker Nancy Pelosi changed her mind about the political risk to her party in impeachment. Polling on the issue appears to offer some hope that the Democrats will not be punished, but when the POTUS made the issue party v. country, it’s good to see that most Democrats did not consider that a hard question.

I remain ashamed of my dithering even after being rescued by events.