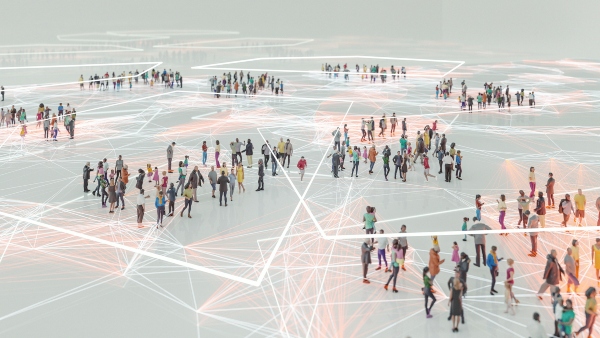 The critique that the P2P approach that we are defending in these pages is utopian can come from two different quarters. One is the obvious one, the conservative side. This approach suggests that humans are very flawed, and that our societies reflect those flaws and that social rules should take into account the basic fact that humans can’t be trusted, and that institutions and ‘law and order’ are needed to keep them in check. Or, in its liberal so-called free market version, that it is best to create a society which takes into account greed, but assumes or tries to turn mutual greed into a common good.

But there is also an opposite, more radical critique, which says the p2p approach is utopian because it is too ‘soft’, doesn’t take into account class dynamics and the fact that the power of the ruling elite needs to be broken before any true change can be achieved.

In this mini-essay, I’d like to deal with such criticisms.

First, I want to stress that in my mind, the p2p approach is NOT utopian, but that at the same time, I do not see utopian approaches as necessarily evil. Utopias and ideals can inspire humans to positive social action, and have always been a driver of history. They CAN become evil when they become coercive, and try to corral human diversity and social complexity, into the utopian-established moral expectations. But many examples of ‘bad utopianism’ may not be good examples. For examples, is Stalinism a perverse utopia, or rather, was a new ruling managerial elite just using it as an ideology to justify and strengthen its own power. In my analysis, the socialist utopia is just a ‘front’, not the real cause of what was wrong.

So why is the p2p approach not utopian. First of all, because we do not strive in any way for a vision of a perfect society. P2P is not about achieving a classless society say, or universal brotherhood. It’s about reversing the destruction of the biosphere by abandoning a system based on a fake notion of natural abundance, and of reversing the increasing trend of artificial scarcity that hampers human social innovation. While the second may be a luxury, though we in fact really need it as well in order for sustainability oriented innovation, the second is absolutely crucial. Rather than have a image of how society should be, and comparing any real trend against this image, our approach is meliorist, improving where we can. Yes, we are also for a more radical change in the logic of society, around the commons as main institution and with a non-infinite-growth market as sub-system for the allocation of rival goods, but this can be achieved only by a time-dependent drive to maturity. Of course, society could evolve much faster than expected, but this could also be a negative development. For example, for the internationalist socialist movement of the 19th cy, the Russian Revolution was a disaster, because it remained isolated in a country which did not have the necessary material basis for the changes that they wished for to occur. Meliorism, in our context, the slow but steady building of alternative social logics, is not enough, but remains necessary as a complement to any social and political mobilization.

So the approach of the P2P Foundation, as proposed by myself, and there may be other views as we are a pluralist platform, is the internetwork all the human initiatives towards open and free, participatory, and commons oriented practices, and the open infrastructures needed to make it happen.

Our approach is subjective-objective, but the last term is very important. Without the necessary maturation of objective modalities of production and human organization, a subjectivist approach based on the human will, like say the Negrian waiting for insurrectionist rapture, would not succeed. Open infrastructures need to be build, social organizational forms and institutions need to be built, while AT THE SAME TIME, human consciousness evolves and becomes politicized.

In a recent seminar of the Universidade Nomada in Venice, Italy, where a lot of post-autonomist thinkers and activists where present, some of the speakers outrightly dismissed any open development as already coopted by capital. Geert Lovink, not an autonomist himself, went even so far as declaring the free culture movement as public enemy.

This is evidently not our approach. While we think that cooptation will happen, and is happening, we also see it as a necessary maturation of the new infrastructure of social production, of the new sharing and commons-oriented consciousness, and these are trends which are to the advantage of the communities of peer producers and sharers. It is within these trends, that social trends for autonomy need to take place, that social charters need to be imposed or negotiated, which maintain the maximum autonomy for the commons and their communities. But we are not waiting for any ‘red dawn’, we are changing the maximum aspects of our life that we can, interconnecting our efforts, learning from each other and our mutual experiences. While the end goal is a restructuring of our economy and civilizational forms, we are not waiting for any rapture. Phase transition will happen, needs to happen, as infinite growth systems cannot endure in finite systems, but it could be a transition that worsen humanity’s fate and condition, or it could be the p2p transition we are hoping for. But this doesn’t require as much shouting radical slogans from the rooftops, as patient but continuous work in new infrastructures, while obviously restructuring our own consciousness in the process, and thinking about the necessary political forms that are needed.

The way I see it, we need three elements to succeed.

First, we need to construct the alternatives. I want to insist that this is not a reactionary struggle for say, pure relocalization, or small utopian communities, like the utopian socialists of the 19th century, what Marx called ‘dwarfish forms’. Rather we are building a new system of production which recombines an important amount of relocalization (because physical material globalization is a disaster for sustainability), but combined by a globally connected infrastructure of mutual coordination and collective learning, which can achieve a hyper-growth in human productive innovation.

At the same time, we need to build and associate with powerful social movements, that struggle against the attacks of the now ‘extreme neoliberal’ state, which attacks the very social fabric of society to save the predatory financial system. But for such social movements, it is not sufficient just to say no, and have a politics of refusal, and it is certainly not sufficient to return to socialist statist approaches, but they need an awareness of the alternative social and productive infrastructures that need to be strengthened in order to have a better alternative.

Finally, we need a political extension, one that, based on a commons-oriented policy framework, and a push towards replacing the corporate welfare state with a Partner State, that institutes commonfare (Andrea Fumagalli) and retakes control of the ‘commanding heights of the economy’, now in the hands of the destructive predatory factions that have taken control of the market states (as proposed by Nick Dyer-Whiteford).

It is the combination of constructive open communities, mobilized social movements, and a political extension of the power of both, in a grand alliance of the commons, which will be necessary to turn the maturation of open practices and infrastructures, into the necessary phase transition that can save us from the coming barbarisms.

This post was previously published on Commonsstrategies.org and is republished here under a Creative Commons license.

The Commons Strategies Group (CSG) is a partnership to help advance the commons in diverse settings — both in theory and practice. Working on four continents, we catalyze and assist commons-based projects, activism, research and public education with a great variety of partners.

CSG is an activist and research-driven collaboration to foster the growth of the commons and commoning projects around the world. CSG is focused on seeding new conversations to better understand the commons, convening key players in commons debates, and identifying strategic opportunities for the future.