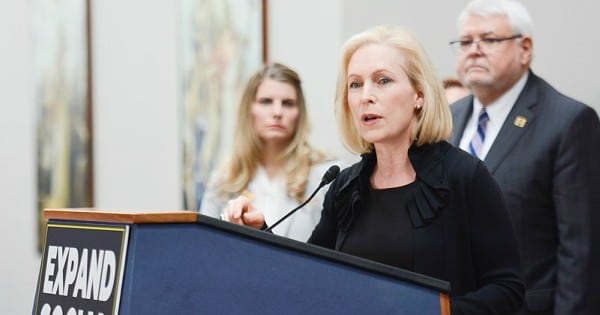 Today we look at Kirsten Gillibrand. She was the House Representative named to replace Hillary Clinton when Clinton was named Secretary of State.  In the Senate, she had a delightful record of voting nay on most of the Trump nominees. I consider that a plus.

There are few more staunch defenders of women in the government. She worked on the Campus Accountability and Safety Act. Further, she has campaigned tirelessly to change the way sexual assault is dealt with in the military. Gillibrand was the first to call on Al Franken to resign after the charges of harassment were reported. She is a strong advocate for women’s rights. Women’s rights are human rights.

She backed the New Green Deal. And feels that climate change is a man-made existential threat.

Using tax credits as an incentive she would try to encourage companies to offer on-site day care. An act that would provide an immediate benefit to lower-income families. Improving public schools and offering more job training programs would also help the less fortunate. Though she has stopped short of calling for tuition-free college. But, she does have some very sound ideas.

Calling ICE a “deportation force” she has promised to “reimagine” the department.  At one point she called to eliminate the agency, but after a bruising attack she “reimagined” her approach. Which isn’t a bad thing, by any means, the world is a complicated place and we need a leader who can adjust and learn on the job. We have proof of that in the White House.

On the darker side, she was given an A+ rating by the NRA. Though she has changed her stance, that kind of stain is hard to cover. Not impossible, just difficult.

She was one of the co-sponsors of the Medicare for All bill that would eliminate private insurance and convert to a government-sponsored health care system in 4 years. To pay for this they impose higher taxes on the wealthiest one percent

Obviously, there is not a lot of new ground here. But, she has managed to stake a plot somewhere in the middle of the Democratic candidates.

There is something new to report on Pete Buttigieg. He has announced a list of heavy foreign policy advisors. It is a bold move that seems designed to prove he takes America’s place in world politics seriously and is willing to lead from the front. And after Trump, there will be a lot of heavy repair work needed.

Facebook71TweetPinEmailShares71
wpDiscuz
0
0
Would love your thoughts, please comment.x
()
x
| Reply
Share this ArticleLike this article? Email it to a friend!
Email sent!