Get Daily Email
Join/Login CLOSE
Home / Featured Content / Move the Movember: We’re in This Together 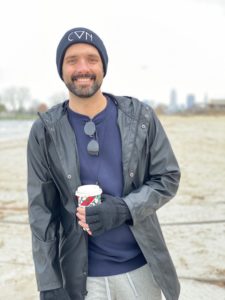 This month, Billy Tyler is doing the “Move the Movember,” is walking sixty miles during the month of November (in 20 mile increments) to raise money and awareness for men’s mental health and suicide awareness. “That’s 60 miles for the 60 men we lose to suicide each hour, every hour across the world.”

We caught up with Billy, after he had completed the first 20 miles, and got to speak to him about his experience doing with walk, his motivations for getting involved, mental health and suicide prevention.

“I bit off a little bit more than I could chew when I first announced I was going to do 60 miles consecutively in one day – that’s like three marathons, and I don’t run and I don’t even walk – I did 20 miles. I had a lot of great people show up throughout the day.” He walked in a group in Edgewater Park, which borders Lake Erie in Cleveland, Ohio, with different people – a mix of friends, family, media, and total strangers – each joining for pieces of the walk throughout the day, talking to each other and supporting each other while walking. 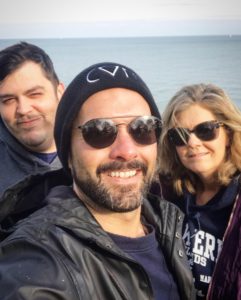 Billy is a suicide attempt survivor, and having lost his one of this best friends, Den, to suicide six months ago, he is also a survivor. After surviving his own attempt, he spent most of his life having covered up and not ever talked about his own attempt:

“My parents are from a different generation, one that deals with mental health in a really different way. My mom just wanted me out of the hospital, because if I was in the hospital, I was a crazy person. My dad wanted me to apologize to everyone that I’d inconvenienced.”

Losing Ben to suicide opened up a path in Billy to navigate his own healing and his own emotions in a way he had never done before.

“My whole idea was to draw attention to this issue and to be available to people who could come and talk about this issue in a very laid-back setting.”

Movember provided a cause to attach to at a time when Billy was ready to open up completely and share his own story and to talk openly about suicide and all the feelings and emotions around it in a way he had never done before. And from his own experience, he connected with people on an authentic real level:

On the issue of helping to spread awareness, these sixty miles are only the beginning of Billy’s journey. He raised over $2000, with donations continuing to come in. It has also given him the opportunity to become one of the voices pushing for greater awareness:

“My passion is empathy and wanting to fix the bigger problem. So I’ve been using that as my fuel to help people wherever and whenever I can with my own personal story….We have to talk about it. We have brushed it under the rug for too long. And that’s why children are dying quietly in their bedrooms. We need to re-educate people, and survivors and attempt survivors talking about it is a powerful piece of that. We also need more education around dealing with the trauma of being a survivor and dealing with the grief or pain or shame of losing someone.”

Billy is keeping the conversation going and growing it, with plans to meet with local officials in a nearby city to convene a special panel to talk about suicide prevention/awareness programs. Helping to de-stigmatize the topic of mental health and  helping people realize that everyone struggles and that about talking about our mental health “is cool” are all part of it.

If we just talk to each more, we can together make it so much better for everyone. There is much work to be done. “Miles to go before I sleep,” as the famous poem goes, but the only way to get there is together.

Facebook177Tweet4Pin1EmailShares182
wpDiscuz
0
0
Would love your thoughts, please comment.x
()
x
| Reply
Share this ArticleLike this article? Email it to a friend!
Email sent!