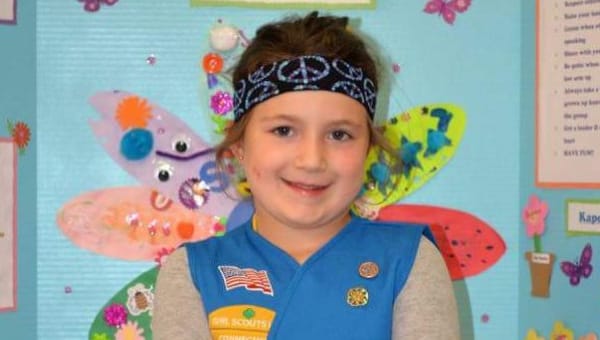 Growing up in the small town where I did, options for after school activities were fairly limited, particularly for someone with next to no athletic skills. There were a few years of little league glory, a short window of time when an unpredictable curve ball garnered me a few cheers, but for the most part the afternoons and weekends of my youth were spent either riding my bike distances that now seem outrageous, or running around in the woods.

On one weekend a month those woodland adventures would include an overnight camping trip, my favorite part of being a Boy Scout.

I don’t know if there will be camp outs, don’t know much about what they do at all, other than the cookie sales, but Alaina is now a Daisy Scout, the lowest rung on the Girl Scout ladder. She has a uniform that she is very excited about, some patches that I was able to iron on, and has already marched in her first parade.

She also has what she calls her “Daisy Rules”, the Girl Scout promise which states that “on my honor, I will try to serve God and my country, to help people at all times, and to live by the Girl Scout Law.”

That’s a pretty substantial moral contract to be required of a kid that has only been able to write her full name for a few months. Substantial, but no bigger than the Pledge of Allegiance that her class still says every morning, my oath to “honer and obey” my wife, or the Boy Scout promise that I was surprised to realize that I still remember most of.

Typically I would be wary of her agreeing to any oath of fealty or promise of future behaviors to anyone other than myself, but since this isn’t Hydra, The First Order, or The Church of Scientology, I’ll allow it.

The truth is that these are very similar to the set of ideals that we are trying to impart upon her. We haven’t instituted a mantra for her to repeat, but the more emphasis and encouragement that she has to be a good person, the better. I look back fondly on my many years of scouting and believe it to have been a very positive influence in my life. I’m hopeful and confident that one day she will feel the same.