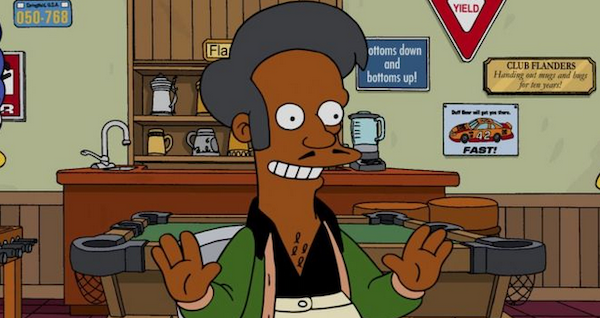 News that actor Hank Azaria will no longer voice the character of Apu on The Simpsons has been received as something of a shocker. Typically, online reactions have run the gamut from blaming cancel culture to reception of the announcement by Azaria on Slashfilm as a sea-change brought on by wokeness.

No doubt, Hari Kondabolu’s documentary The Problem with Apu (2017) had much to do with intensified scrutiny of the controversial character. Apu Nahasapeemapetilon, an Indian immigrant who holds a PhD and manages the Kwik-E-Mart, a convenience store, first appeared on the long-running animated show in 1990, soon after The Simpsons’ debut on American television the previous year. All along, he has been voiced by Azaria, a white actor, who affected a fake accent. After Azaria’s revelation on January 17, the character’s future on the program is unclear.

In Kondabolu’s documentary, he and other (mostly male) South Asian American actors speak about the grief Apu has caused them. Some mention the racial taunts they received when they were younger, Apu being the inspiration for those jibes. The actors also explain how the popularity of The Simpsons and its resident brown store-clerk may have affected their careers as many of the roles they were offered were of a stereotypical nature and required an accent.

Given the dearth of South Asian representation on US television and in cinema while they were growing up, these actors note the comparative hypervisibility of Apu who left a lasting impression with his sing-song accent which was not even provided by someone of the same racial origins as the character. Further, the actors muse, in standing in for South Asians in America, the character also skewed how that ethnic community has been perceived by mainstream society.

But for Kondabolu the problem isn’t simply Apu. It’s that Apu just doesn’t do enough. He could be a business tycoon. Lauding the show, Kondabolu says of The Simpsons that its Apu problem could be sorted not by killing off the character, which would be “very lazy writing for such a brilliant show … [G]ive him some upward mobility. If you’re saying satire is built in reality, there’s a lot of South Asians who run convenience stores … However, they often end up owning the place … They become like little moguls.” In other words, Kondabolu believes that the Apu controversy can be taken care of by portraying the character as not working class and as a successful model minority.

It is true that most representations of South Asian clerks in American media have been lacking. Where are the stories of South Asian laborers who are undocumented in the United States? Are there TV shows about convenience store clerks who deal with armed robberies? What of these clerks’ family lives or of South Asian women who are also employed in such professions?

Apu has been on television for as long as I have lived in the United States. I sometimes thought about how that character might be who customers had in mind when they interacted with my dad and his colleagues at the 7-11 he worked at. And while where that store was located was relatively safe, I worried about my father returning home on his bicycle after he’d completed the graveyard shift. On the days when he didn’t have much to say, I knew that things at the store hadn’t gone well. Sometimes he’d reveal that he’d had words with a customer or that it had been an exhausting night. I was glad when he quit his job.

Azaria may no longer voice Apu and that stereotypical character’s presence on The Simpsons may well cease, but US media still has a long way to go in giving voice to those that make up its working class.

R. Benedito Ferrão is an Assistant Professor of English and Asian & Pacific Islander American Studies at The College of William and Mary as well as a Fulbright-Nehru Fellow.

Facebook58TweetPin1EmailShares59
wpDiscuz
Share this ArticleLike this article? Email it to a friend!
Email sent!