The image of the henpecked husband is nothing new, and neither is its effect on masculinity.

Having undertaken research on power relations in heterosexual relationships, I have realized how complicated these gendered power balances are. When you listen to contemporary discussions about masculinity being in crisis as a result of gender equality going wild, it seems that dominated men are the product of the last 40 years of feminist power gain. However, a little historical digging has revealed that the figure of the henpecked husband is both old and cross-culturally recognized. For centuries, the henpecked husband has worked as a masculine demarcation and been ridiculed as compliance showing male weakness.

The Danish term in itself is kind of funny. We talk about slipper heroes. When I looked the term up in a dictionary, it revealed a long history as the expression ‘being under the slipper’ can be found in classic Danish literature as far back as the middle of the 18th century. In classic comedies, you find bossy wives hitting their husbands with their shoes to the vast amusement of the audience. Etymologically, the notion originates from German where it probably derives from an old wedding ritual where the bride and the groom played a game of stepping on each other’s feet. The person who ended on top was said to be the one holding the power in the relation.

Likewise, shoes are also said to have played a symbolic part in ancient Egyptian wedding ritual. The father of the bride would take her shoes and present them to the groom as a symbol of the power over her passing from the father to her husband. The groom would accept this right by hitting her on the head with her shoes manifesting that he was the one in charge. Shoes have had a symbolic power of signaling power and domination for a long time.

But what about the slipper hero? Already in ancient Greece, we find a story of the famous philosopher Socrates complying with his dominant wife Xanthippe. In Xenofon’s classic book Symposium, we hear about Socrates’ wife as dominant and shrewish. Socrates argues that he actually likes this challenge, but is also portrayed as someone who is putting up with a lot of trouble. Perhaps it’s a challenge, perhaps he does it out of love, or maybe because it is just easier to let her run the show instead of demonstrating his authority as a man. No matter the reason, what happens is that Socrates complies and therefore he is ridiculed. What man would willingly accept such disrespect from a woman? His compliance is captured in this classic painting of her pouring water on him. 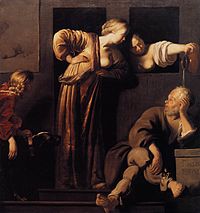 The chamberpot episode: Socrates, his Wives and Alcibiades, by Reyer van Blommendael

In medieval Europe we find another story, which informs us about the pleasantry of male compliance. Phyllis was the beautiful wife or concubine of Alexander the Great. The young emperor’s adviser, who over the years turned into the philosopher Aristotle, was dissatisfied with the emperor spending more time on his mistress than on fighting wars, so he told the emperor to break up with Phyllis. As revenge, Phyllis seduced the philosopher and with woman’s wiles she persuaded him to let her ride on his back. She arranged for the emperor to see this proving that the wise master himself was also weak. 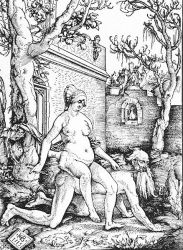 Aristotle and his lover Phyllis. Phyllis is riding on the great philosopher, which is used to symbolize the power of the women. Story often pictured by Renaissance artists.

The moral of the story is said to be that the women’s power of physical seduction is stronger than man’s reason. The picture of Phyllis on the back of the great philosopher became one of the most popular motifs in the Renaissance. This indicates that men’s compliance was already then a piquant subject, and that stories of male weakness were constructed as amusing.

The henpecked husband stayed a subject of humor and amusement through the centuries. With the prevalence of the printing press, he became the subject of postcards and valentines cards. The first card below is a so-called ‘one penny print’ from the middle of the 18th century when multi-color print had just become possible. It shows a man getting spanked by his wife while the text says something about her hearing the baby cry while she spanks him.

That it is supposed to be funny seems odd today, where domestic violence is ill regarded. However, in times where a woman was the property of her husband and his ‘natural’ right to inflict corporal punishment untouched, this play with flipping roles would have probably been hilarious. The tradition was also exported to the United States as we can see on this vintage American valentine card from the early 20th century.

It is kind of hard to imagine this mocking card being given as a romantic devotion of love. Cards like this are made for the sake of teasing men who complied with their wives. Imagine a man who would do the dishes voluntarily. Or maybe even think it was his responsibility too. Ha ha!

So, what can we learn from the historical prevalence of the henpecked husband? He might be pitied, but most importantly his suppression has been the object of ridicule. Why is this? For almost two centuries, feminist women and men have been fighting a serious battle for women’s freedom from repression. Why has no one fought for the henpecked husbands? Maybe because no one really sees him as dominated. His submission is seen as compliance. And compliance passes as an internal weakness in the man, not as something imposed on him by an outside force.

By choosing to give in, the henpecked husband dismisses the basic rules of displaying manhood, that is, to perform strength, willfulness and to take up the amount of space that a man needs and is entitled to. The henpecked husband is not a product of the feminist movement nor of social progress. He is the scapegoat of male fear of the loss of autonomy and of showing compassion and caring about others; emotions that are labeled as weakness in male bodies. This fear still plays a significant part in the construction of masculinity in contemporary societies. To be caring and to comply is not necessarily the same thing, but the line between the two is so thin, that I guess more than one man has failed to show carefulness and consideration in order not to be emasculated and labelled ‘henpecked’.

Photos courtesy of the author, via:

Anna Sofie is a visiting scholar at The Center for the Studies of Men and Masculinities in the spring 2014. She is a PhD candidate at Department of Sociology at the University of Copenhagen, Denmark. Anna Sofie’s current research interest is how social change affects the gendered structures of intimate life. Her current research focuses on men’s experiences of living with a woman who has a career job.

I dumped a girl on Monday who was henpecking me. The only way a man can remain a man in a relationship with a woman who does this, is to leave. She can enjoy her cats. She cannot be fixed, or reasoned with. The behavior will be there in perpetuity.

It is abuse, plain and simple.

By choosing to give in, the henpecked husband dismisses the basic rules of displaying manhood

And what if he doesn’t choose to “give in”, but actually does so because he is being abused?
Or is that so far out of your field of interest that you haven’t even considered it?

Reminds me of …… Husband and wife are killed in a car accident. They both went to heaven and there were two lines. One gate said “for henpecked men” and the line was as long as the eye could see, and the other said “for men who were not henpecked.” This gate had one lone man standing there. St’ Peter with a big smile on his face, went up to him and made a comment that he was the only one at this gate. The man turned to St Peter and said, I don’t understand what you’re talking about …… Read more »

Pretty much. But notice that this is almost never called abuse. On the other hand a man treating a woman in this same manner is considered abuse. And I think its because of this, “His submission is seen as compliance. And compliance passes as an internal weakness in the man, not as something imposed on him by an outside force.” When men treat women like that outside forces are included, when women treat men like this its treated like an individual event not linked outside forces.

(And apparently exonerating feminism is more important than calling this behavior abuse.) 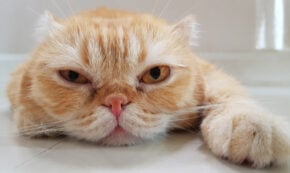 FacebookTweetPinEmailShares10
wpDiscuz
5
0
Would love your thoughts, please comment.x
()
x
| Reply
Share this ArticleLike this article? Email it to a friend!
Email sent!