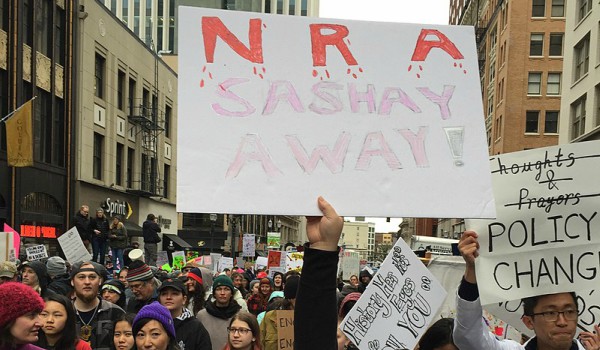 Since I have recently been invited to join the NRA it seemed like a good idea to look into the benefits of membership. Mostly, for my forty-five dollars I get the privilege of defending everybody’s second amendment rights against the endless attacks by “judges, politicians and bureaucrats”. Plus, it helps foster and educate the next generation of sportsmen and women.

Provided, of course, you consider shooting at things a sport. And, if that wasn’t enough, it gets me free admission to NRA’s Guns, Gear and Outfitter’s Show. As an added benefit, I will get a “free gift.” As long as you don’t count the forty-five big ones I send off.

Apparently, one of the rights provided by the second amendment is the ability to purchase and use assault-style weapons. One of the real benefits of assault rifles, such as the illustrious, hotly debated, and relatively inexpensive AR15 is the muzzle velocity. It travels so fast the damage is horrible. Peter Rhee a trauma surgeon at the University of Arizona compared the damage done by an assault rifle and a nine-millimeter pistol, “One looks like a grenade went off in there… The other looks like a bad knife cut.”

Fruitport High School in Michigan is being redesigned with curved halls, and beefy concrete walls for students and teachers to seek cover (read as “cower behind”) in the event of an assault rifle-wielding shooter. The glass in windows and doors is being reinforced to stop bullets. It is a bunker where children, our children, are going to receive the education to propel them through life, if they live that long. I am still looking for the extra costs of adding all these nightmare provisions but that is not being widely reported. Maybe nobody knows how much all of the extras cost, or maybe they just don’t want to talk about it.

Wayne LaPierre, one of the grand poobahs of the NRA, once said: “the only way to stop a bad guy with a gun is a good guy with a gun.” The real problem with that argument is the never-ending loop we are stuck in. It suggests that more guns are the solution, kind of a Mutual Assured Destruction on a micro-level. Apparently, the people in Fruitport MI have taken a different path. It curves and deflects and covers and shields.

Which is strangely reminiscent of the attitude of the nation. We don’t really want to see reality. Everything is hidden by something.

We can’t see the forest through the distorted reality of our own expectations. The NRA calls itself the “oldest civil rights organization.” To me, that sounds a little dubious, apocryphal, even outrageous. It hides the single-minded obsession of a failing political action committee behind a veil of kindness.

And it does seem to be failing, why else would they send me an invitation to join? And offer me a “free gift?” As a nation we need to decide which is more important, the right to stockpile an arsenal or the rights of children, teachers, school employees, Walmart shoppers, ex-coworkers to live long enough to die of natural causes.

After careful consideration, I have decided to decline the kind offer of the NRA for membership. I will stick with The Good Men Project, the Woodstock and the 60s Hippy Channel. Maybe the Upper Peninsula Big Foot Society. I appreciate being considered but we have different civil rights goals.