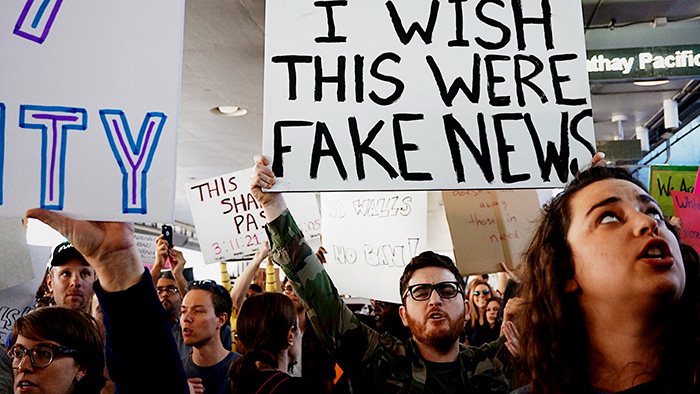 White House press secretary Sarah Huckabee Sanders at a briefing of journalists this past week exclaimed in exasperation:

It would be difficult to disagree with her observation that media coverage of the president is 90% unfavorable.

Why is the press overwhelmingly negative toward this president?

1) He lies obviously, shamelessly, and constantly.

2) His ideas and policies are uninformed, constructed from whim, and largely empirically wrong.

3) His behavior is morally repugnant and his driving force is feeding his ego.

4) The circumstances of his election are being investigated for criminal intervention by credible authorities.

The press is doing its job. The press is reporting on the dangers it sees threatening our nation. Were the weighting of critique not so uniformly negative, we might wonder if there was some hidden agenda in an institutional bias, some collusion with ulterior motives. The only collective agenda I can glean is the reporting of information allowing us to make critical decisions about our freedom and well-being.

Fake news is not the work product of trained journalists under credentialed editorial supervision. Journalism and a free press are the backbone that anchors the ongoing experiment that is our democracy.

Fake news is the drivel that emerges from undisciplined commentary and targeted propaganda. Misdirection is a tactic of human divisiveness, subversion of logical process, and chaos that beckons autocratic control.

Journalism and misdirection are not the same, unless one purposefully hijacks the other. When a true journalist makes a mistake or misstates a fact, the press runs a retraction. When an ignorant or hateful opinion-maker deliberately attempts to mask a lie as the truth, the lie is left to stand because it was intended to spread falsehood.

To confuse journalism with fake news is to misunderstand the fundamental pillar protecting democracy from authoritarian rule.

The press is not the enemy of the people.

Our president is not a victim. His relationship with the media is his own making.

Read your ballots carefully. Studied reporters have filled our news sources with more analysis than at any other time in history. We always have a choice.

Get out the vote.

Photo by Kayla Velasquez on Unsplash

END_OF_DOCUMENT_TOKEN_TO_BE_REPLACED

Facebook53TweetPin2EmailShares55
wpDiscuz
Share this ArticleLike this article? Email it to a friend!
Email sent!