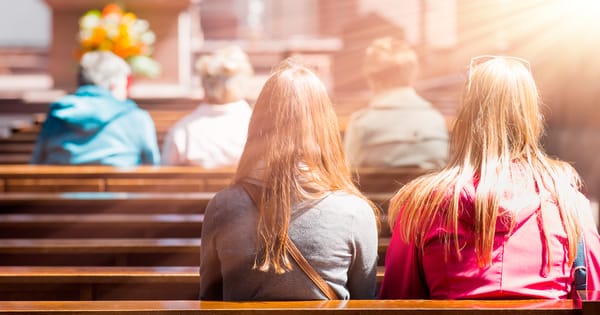 A few days ago, someone posted in one of the local “What’s going on?” Facebook groups asking for a recommendation for a local church. I was glad to see not a single negative comment in the 170+ posts that followed the original question. But the more I looked at the thread, the more I realized that’s about the extent of the good news.

When you cull out the “Me, too!” posts that were agreeing with previous posts, there were just over maybe three dozen posts talking about a particular person’s church, and why they wanted the original poster to come to their church. Lots of people mentioned their service times, and things their church provided as part of those services. I saw mentions of a children’s choir, Easter Egg Hunts, evening Bible study, Easter drama performances, discipleship classes, an “excellent children’s program,” Royal Rangers and Daisies, small groups, Chosen Youth Worship, “an awesome nursery worker,” and a bus ministry. Lots of people bragged on their pastor, their praise and worship team, and their fellow congregants.

One church member was certain that their church “preach[ed] what will get you to Heaven! We are silent where the Bible is silent.” Hmm.

Another said they’d “do anything short of sin to reach people who don’t know Christ.” That kind of got my attention.

Denominationally, I saw Baptist churches, Church of Christ, Church of God, Nazarene, Methodist, over half a dozen non-denominational, and Assemblies of God. Not a bad mix for a town of 40,000.

But it’s what I didn’t see anyone talking about that concerned me.

I’ve written before about my faith struggles. I still haven’t quite been able to put my finger on exactly what’s wrong. I’ve been a member of two different denominations during my religious life, and frankly, neither one of them makes me comfortable when it comes to my understanding of what they believe in.

I grew up in a Lutheran Church back before the ELCA merger of 1988. I recall that merger being a very contentious time in our home and that my father was adamant about his position. I seem to recall that Dad was leaning to the conservative side of things, but that’s a foggy memory at best.

After I married the second time, I got involved with and eventually joined the Church of the Nazarene. Nazarenes are very evangelical and very conservative. It’s only in the last 20 years or so that the Nazarene church allowed its members to go to movies, for example.

I got saved in ’97 and baptized as an adult later that year. Funny side note, I had been baptized as an infant in the Lutheran church. When I told my mom I was being baptized again, she asked, “Didn’t the first one take?”

But after I got saved, I didn’t quite know what to do with myself. I read some of the Bible and went to a couple of Promise Keepers conferences (I’m better now), but that was about it. It seemed that everything I did in those in those first few years was focused on typical conservative behaviors: do this; don’t do that; modesty; Christian dating; etc. Our kids weren’t old enough for us to really worry about the latter two, but I somehow bluffed my way into serving as an interim youth leader for a year or so. I truly hope I didn’t damage any of those kids. Gang, I’m sorry if I did. I meant well, but I just didn’t know what I was doing. I think they figured that part out in the first couple of weeks, actually.

And that’s pretty much how things were for the next ten years or more. Lots of focus on worshiping God, using your gifts (I served on praise and worship teams at our next three churches), obeying God, prayer, and so forth.

Oh, and while you’re doing all of this, make sure you bring others to Christ. You have to grow the Kingdom, you know. It’s not going to grow itself. You have to have the ABC talk with people.

I never had a real clear view of how a painfully shy introvert was supposed to have such a life-changing conversation with a stranger. I couldn’t even have that conversation with my mother, and boy howdy, did that cause me some grief when she was dying.

And why should someone listen to some middle-class white guy with a bunch of kids who didn’t really know what he was talking about? What’s he know? What gives him the right to tell me what I’m doing wrong?

So I struggled with that more and more over the years, that whole salvation discussion we were supposed to have with everyone we met. I knew people who really didn’t care about heaven because they were more concerned with where they were getting their next meal. Or whether the water would get shut off this month, or would it be the electricity?

It’s kind of hard to take someone through the ABCs of salvation when they’re jonesing.

Evangelicals think heaven is a big issue. They think it’s THE big issue, right? The ONLY issue. Nothing can be more important than where you spend eternity. But far too many of them have been in the church so long that they’ve become too focused on eternity and forgotten how many people have to live in the now.

Maybe they’ve never had to squeeze their stomach to quiet the growling because their last meal was three days ago.

Maybe they’ve never had to use a dirty fork because the water got turned off because daddy ran off and momma put the last of the money in a crack pipe.

Maybe they’ve never had to argue with the beast that’s making their skin crawl and their heart race and their mind ache while they wonder what else they can sell to get a few more bucks so they can get their third or fourth or sixth fix of the day.

When a person is dealing with something like that, that’s all they’re dealing with. They don’t want to know about some guy who got beat up on some road and left for dead, because they’ve seen people beaten or stabbed or shot for nothing more than wearing the wrong color clothing.

They don’t want to hear about how two cities got burned up when they have to worry about how their uncle or grandfather or cousin looks at them or touches them.

Don’t tell me about what you’re doing for the people inside your building. They’ll get where they need to be soon enough. Your focus needs to be on the folks who think they can’t even step foot inside your nice, pretty building because they’re too dirty.

Tell me about how your church is setting up a clothing closet.

Tell me about how your church is driving people from an apartment complex to the grocery store while you babysit their kids.

Tell me how your church is providing clothing and dishes and housewares and housing to someone who fled an abusive spouse with just the clothes on their kids’ backs.

Tell me how your church is driving people to prison so a mom can see her kid.

And if your church isn’t living Mathew 25?

Tell me what you’re doing about it.

Freedom Fellowship Church of the Nazarene in Muskogee runs a free clothing closet Friday evenings, from 6-8. See their Facebook Page for more information.