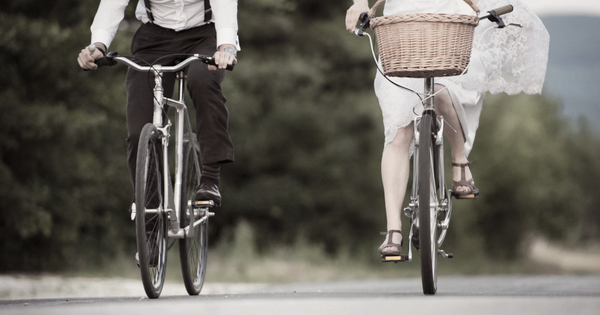 I biked from my apartment complex along the brick road of Church Street. The Saturday afternoon felt more like a Sunday evening. Nobody walked or even zipped around annoyingly with motored scooters on the sidewalks. No cars parked in the metered spaces or the garage and only a few passed quickly by on Rosalind Avenue with their windows rolled up. However, the drivers wore face masks and gloves.

I biked along Rosalind Avenue past Central Avenue and it felt like an early Monday morning. The street people lounged on the 7-Eleven stoop. Cars filled up the spots lakeside. Joggers looped the nearly mile circuit. However, a TV crew interviewed white-haired folks holding Seniors for Freedom! signs and a cluster of police officers stood in the shade of the amphitheater.

I continued to bike where Rosalind Avenue and Magnolia Street merge together like I was going to work, except I didn’t have work. I had never encountered three cyclists biking along the lane at the same time. Two heaved beach cruisers and another pumped a racing bike.

I turned onto Livingston and followed the racing cyclist in the bike lane. Not one car rolled over the brick road parallel the cement lane. I wondered where the cyclist had bought his bike. Perhaps he was riding toward Kyle’s Bike Shop where I had gone in with my old orange ten-speed bike when L and I first returned to Orlando.

The shop guys at KBS hadn’t been willing to work on my orange bike. The crank gave too much play and the pedal would eventually snap sending the metal into a rider’s shin or Achille’s tendon. They wouldn’t risk it, but they would sell me the parts.

I didn’t want to ride a repaired risk. I asked about buying a bike.

One of the shop guys asked, “Are you a commuter?”

“Pretty much every day unless it’s raining.”

“Well, as long as it’s not thundering and lightening, I ride.”

I bought a new yellow Giant bike. The shop guys suggested for me to keep my orange bike’s frame and mount it to my wall for memories, but I didn’t know how the steel frame wouldn’t tear off the dry-wall. I asked them to scrap my old orange ten-speed since I kept the memories of when I had first biked on it around Orlando and with L.

I used to bike from the east side of town from Lake Underhill Road along Econlockhatchee Road named for the river. I didn’t live near the lake and the road paved over the river. I biked to and from my job at Lazy Moon Pizzeria via Jay Blanchard Park. I biked onto the lanes after the park but it didn’t seem much safer up by the University of Central Florida where students texted while driving.

I had just been a UCF student, but took a gap year while I applied to grad schools. I met L during that year. I asked for Sundays off of work so I could be sure to spend them with her since she worked during the week in a construction office.

We built a lot of our relationship on biking. I would pack my bike in the trunk of my car and drive up to her north of Orlando or she would pack her Bianchi that she got in a swift eBay deal in her car and drive down to me. We were in our early 20s and we wore jean shorts and we spun our pedals forward together. I loved following her magnificent hourglass figure but I didn’t realize that the sands of time were beginning to fall on us.

When I got into grad school, I asked L to come with me. We had known each other less than a year, but she said yes. Yes to the unknown, to me, to us, to love.

L wrote a list of things we needed to pack and added, Lots of LOVE! I cut out that part and laminated the paper. I kept it until we returned to Orlando.

From Orlando, we packed our bikes in the trunk of my car; L sold her car. It seemed quick, because it was quick, but we were going together with love—lots of it. We moved into a duplex in a town in the center of the Midwest.

I remember L coming home with wind-chapped cheeks polishing her smile, her glasses fogged, and her cold nose dripping saltily when we kissed. She gave me the report of her current count of pumpkins on porches and squirrel nests in trees’ boughs and then leaf piles around trunks. I remember L coming home with her hair pasted to her forehead and the ends blonding in the sunlight, her glasses still fogged, but her nose dry when we kissed. She told me about the clusters of tulips that pushed through the snowmelt and the perfume of peonies after the afternoon showers. Either way, she would hop in the shower and sometimes I would, too, and those were our best days when we were happy with what we did and where we lived and over the years what became our community.

I couldn’t find traction after grad school, after we got married. I was afraid of being stuck teaching what I had taught in grad school. I found a job teaching at an outdoor education nonprofit in the Southwest where L could work, too.

We left for me. I didn’t thank her for sacrificing it all. She left her job, her friends, her two-wheeled commute.

We packed our bikes in a shipping container. I drove there with my cat. L flew out a little later.

Our bikes ended up in a storage shed with black widow spiders that spun chaotic webs over the spokes like enchanted spindles. We couldn’t bike in the Southwest as we had in the Midwest. I worked at a field camp and L worked at an in-town office and between it all the cliffs and canyons separated us.

We ended up hiking instead of biking, but it wasn’t the same as just pedaling and not needing to talk. It was plodding. I wanted to reconnect with L and I chattered away. I think that L had so much she wanted to tell me but felt like she couldn’t just say what she wanted to say. Or maybe she didn’t feel like I would hear her. She felt friendless and I wasn’t there much either.

I was often gone for a week at a time and L was left alone with little community. I didn’t think I could imagine that loneliness until I did after our divorce.

I wrapped up my year contract and we didn’t think we could stay. Both L and I couldn’t see ourselves plodding along at something we believed in doing, but didn’t see able to shift up.

For L, we moved again in the Southwest. Or not for L, but a job for L. A next level in her career but at a careerist non-profit. I worked seasonally. We had nothing that we had before: no neat place, no purposeful jobs, no community, and, still, no biking commute.

L wanted to come home. She wanted to return to Florida where she had what she had had before: family. We should’ve come home sooner, but we continued for another year.

L got a job back in Orlando. We packed up our bikes in a U-Haul. With my cat in a carrier between us, we drove across the Four Corners and into Texas where we ate pancakes in the shape of the Lone Star State and then drove through Louisiana during Mardi Gras and then into the panhandle of the Sunshine State, our state, our home, down to the city where we had once ridden together and now drove together and the humidity embraced us as we unpacked.

We had so many boxes. We had too much baggage. We didn’t ask family or professionals to help us with the latter.

We moved downtown so we could bike. But L drove to work. Perhaps she didn’t want to bike through exhaust in the mornings and then through lightning in the afternoons, even if she could take a bike lane along Livingston. We had one car and she had a job so she drove. When I got work I began to bike alone.

I biked along Fern Creek. I couldn’t see the creek. I biked along Nebraska, east of downtown. I biked across Mills that has no granaries. I biked onto the Urban Trail behind an apartment complex where I saw the same black cats patrolling. I biked across a bridge over a lake where I occasionally saw an anhinga with wings spread while clutching the railing, drying off before another a dive. I biked that way even when I was furloughed from work so I could feel the same routine of the past rolling under my tires.

Divorce in the Time of Corona

What Nightmares May Come: Divorce in the Time of Corona