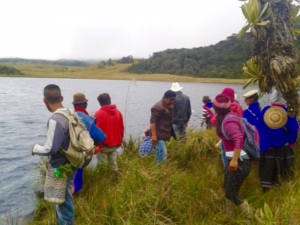 —
Just like gravity works to pull the mountain streams together in the valley where Cali, Colombia rests, Jorge Calero has made it his life’s work to create unity between people and this sacred land. Jorge’s passion for community work began in his youth, when he lived in a small community with his mother and father. As a child, he moved to the city and assimilated into it’s disconnected culture. After obtaining his Bachelor’s degree in biology, Jorge knew that the life offered by “traditional” education was not for him and he began his pathway of reconnection.

He began working with farmers from different ethnic groups in his region to help them with their issues of isolation and disempowerment. During his Master’s degree with Gaia University, he focused his work on indigenous local food producers. The isolation and small scale of their productions has left many of those farmers in poverty and Jorge’s solution was to bring these groups together to share their best practices to negotiate better markets and channels of commercialization of their products. Not only did this project create a sense of wider community among the local producers, but it helped them join forces to increase the scale of products for export, effectively increasing revenue.

Jorge has found that the process of working with communities has been very much an unlearning journey for everyone involved. He explains, “if we are creating this alternative movement of ecosocial regeneration, one of the challenges is to move away from the main-stream paradigm of individualism and competition – owning our own house, our own car, our own everything. We’re only thinking about ourselves, not for the whole community. When we reframe our psyches we learn that on top of individual interests and needs there are community needs and interests that will benefit everyone so much more than only looking out for ourselves.”

According to Jorge, this culture of self-interest rather than collective interest is rooted in a natural pattern, “I consider that the transition we’re involved in now is a part of understanding the big puzzle of human experience and history. The indigenous people of South America were masters of that. When the Spanish arrived to the Incan empire – which was a huge organized territory – they chose not to fight, even though they vastly outnumbered the Spanish. The Inca understood it was for a purpose and that the flow of history – the ups and downs – was about to enter a dry period.”

It is this dry period – isolation, individualism, lack of connection – that we are currently in, but the flow of nature helps us understand that we cannot remain here and that a planetary shift is coming. Jorge’s work to understand the roots of his ancestors – the indigenous medicine people of South America – also leads him to study the prophecies that emerged from a deep understanding and connection to the natural world, “The ancestors of this land have a legacy of prophecies, which speak to the “why” of this dry period and how it’s the right time for the cosmic calendar. The medicine people don’t just carry the understanding of the flow of time, but they carry the knowledge and communication with the earth and spirit of the planet. At some point, we as humans will again regain our capacity to communicate with the land. We need to learn how to rebuild a two way communication with the beings and powers of the earth.”

With this philosophy close to Jorge’s heart, he has been involved in numerous projects over the years whose focus has centered around connection between humans and their natural environment. Just after completing his Master’s degree with Gaia University, Jorge was hired by the local government of Cali to launch an event for the municipal system of protected areas. The goal of this project was to connect the city’s natural reserves, ecological parks, and the watersheds of seven rivers that flow through the city. The event was designed to bring together the NGOs, local indigenous leaders and educational institutions who through their projects were already supporting the ecological development of the city. Private companies and politicians also came together and signed legal papers solidifying their commitment to protecting and regenerating the land. The most powerful moment came at the end during a ceremony which honored the waters from each river and combined them into one bowl. With the presence of the media, local business owners, politicians, and indigenous tribal people, it was a stirring moment of intimate connection among the people and the land.

In addition to his continued work in Cali, Jorge now serves as a Main Advisor with Gaia U Latina, the Spanish speaking branch of Gaia University International and has also modeled a local permaculture diploma program after the Gaia U model. It is with his voice of indigenous wisdom, desire for connection, and understanding of the flows of the universe that Jorge has made his imprint on our planet.

This post was previously published on www.gaiauniversity.org and is republished here with permission from the author.
—
—