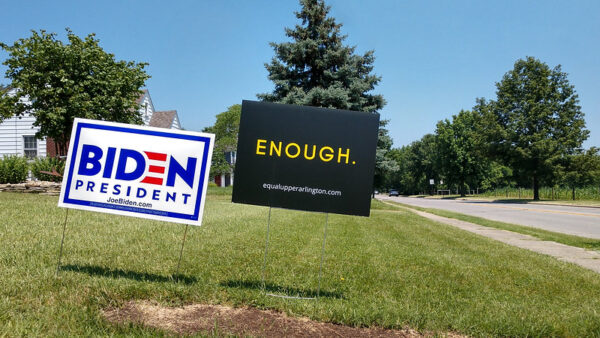 We hear that Joe Biden is ahead from 3 to 12 points in almost every national poll and we want to jump for joy and act silly. But we know we can’t trust polls. His victory won’t happen unless we make it happen.

Other than polls, there is little in the news to bring most of us joy, not after we hear about a plot by white militias to kidnap, maybe murder, Gretchen Whitmer, a sitting Democratic Governor, attack police and incite a civil war.  Not after the death of Ruth Bader Ginsburg⎼ and instead of passing legislation to help the millions suffering from the pandemic, the GOP in the Senate rush to replace her with a sycophant judge and turn the Supreme Court into an extension of DT’s court. Not after over 219,541 deaths and when 28 states are experiencing a spike or second wave of the coronavirus. And instead of leading the nation in dealing with the pandemic, DT leads the nation in trying to hide and deny it.

DT claims to be the “the most perfect person”, “an extremely stable genius” but he is the liar-in-chief, more like a red-faced, malignant ostrich with sticky hands trying to hide his head not in the sand but in a tv set. He has assaulted almost every aspect of this nation, from Social Security, Medicare, the USPS, school children, workers, especially those who are brown and black, the air we breathe and water we drink, our right to protest for justice or to vote.

Considering all this, who has the inclination or energy for joy? It would be inconsiderate, or sacrilegious. Fear, depression, anger and outrage seem more appropriate.

Or anxiety. I am so anxious about the election I can barely stand it. But we need relief, ways to relax and let our minds clear, and mindfulness and nature walks can only do so much.

This is true not only at home, to keep our relationships with family and friends fresh and caring⎼ but also so we aren’t manipulated by DT’s tweets, lies and actions, which are often based on, or are the source for, Russian disinformation. Especially after an unwatchable “debate”, humor can release us from fear and introduce us to compassion. It can help us more clearly perceive our ties to others, our power, and better understand the necessity and the means to act effectively.

For the first few years of the DT era, comedians were a prime source of humor and relief. Jimmy Kimmel and other late night comedians helped influence the effective fight against the GOP attack on our health care in 2017 (although there were some who blamed comedians for making the divisiveness in this nation worse). Humor can be used to oversimplify and obscure, as well as to grasp the complex and reveal what is hidden. Intent is important.

In the 9/26 Sunday New York Times, Nicholas Kristof wrote a piece called “To Beat Trump, Mock Him. The lesson from pro—democracy fighters abroad: Humor deflates authoritarian rulers.” Before DT, we in the U. S. didn’t have much experience confronting authoritarian rulers and so are often stumped about what to do to hold DT accountable. The more normal frontal attacks, and revelations of his corruption and malignant actions don’t work as we expect. As Kristof points out, the impeachment hearings seemed to elevate him in the polls.

But authoritarians like DT have monstrous egos and are particularly vulnerable to mockery. They literally can’t take a joke. We can all go back and read DT’s tweets that came during and after Alec Baldwin’s skits on SNL. And according to Kristof, comic stunts helped bring down the genocidal Slobodan Milosevic in Serbia and the cartoonist Herblock proved a nemesis to our own authoritarian Senator from the 1950s, Joseph McCarthy.

McCarthy could easily have served as a private tutor for DT. Just imagine McCarthy (or Hitler) instructing a young DT on how to use lies, and conspiracy theories based on nothing, as little bombs to blow up democratic institutions. Some of our GOP Senators today could easily have been students in McCarthy’s classroom, but instead of falsely claiming to be weeding out Communists, they are trying to plant a dictator.

Kristof quotes Liu Xiaobo, a Chinese dissident and Noble Peace Prize winner, who said “the grins of the people are the nightmares of dictators.” Kristof further argues that “satirizing an authoritarian is good for the nation” and can soften and make his eventual downfall less violent. We will need that softer transition in November and January.

In other ages when our rights were threatened and our nation divided, like the 1960s, resistance leaders were sometimes able to use humor and playfulness to energize the movement and attract media attention. Think of Abbie Hoffman, Jerry Rubin, and the Merry Pranksters. As an article by Paul Krassner in the in the LA Times put it, “When Rubin was subpoenaed by the House un-American Activities Committee, he wore a rented American Revolutionary costume, and he gave out copies of the Declaration of Independence…. He had manipulated the media to spread his patriotic message on radio, TV and the front pages of newspapers across the country.”

In 1967, at an anti-war march in Washington, D. C., armed with flowers, songs and chants, protestors joined in a ceremony organized by Hoffman and Rubin to levitate the Pentagon and exorcise the greed and manipulated divisions that fueled the war. They didn’t succeed in physically levitating the Pentagon or immediately ending the war, but they got attention.

Humor is certainly not the only answer to DT. We need a hell of a lot of serious political and get out the vote action. But humor can help us maintain our sanity. When we mock wannabee dictators, we can look directly at the threat they represent without turning away in fear and disgust. When we use humor and creative imagery at a protest, or we are accompanied by women wearing “Moms for Justice” t-shirts or we wear red robes and white bonnets to mock Amy Coney Barrett, like at the last Women’s March⎼ or we offer police a flower instead of a club, it’s harder for any media to call us rioters.

We can join with our neighbors and friends to go to the polls in record numbers to vote and sweep DT from office. Or if he cries foul when the world is fair and refuses to acknowledge he has lost the election, we can take up brooms instead of rifles, give out copies of the Declaration of Independence or U. S. Constitution to anyone we see, and sing “Power to the People” as we march to protect ourselves and our nation.

**Early voting has already started in many states. It begins this Saturday, October 24, in New York. Check your local Board of Elections for times and polling sites. 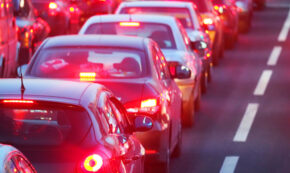 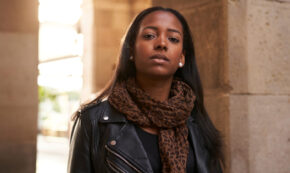 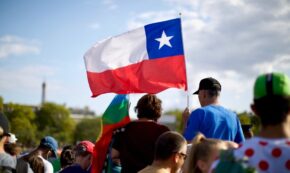 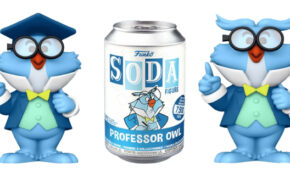 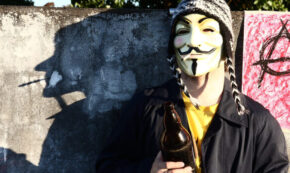