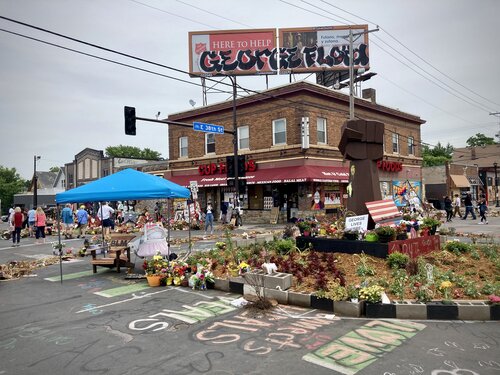 A month ago, George Floyd was killed by a Minneapolis Police Officer in front of the Cup Foods on 38th and Chicago Avenue in the Powderhorn section of Minneapolis. The video of the office kneeling on his back and neck went viral around the world and was the precipitating event of mass protests and riots calling for Racial Justice and Police Reform.

Earlier this week, my wife Lisa and I walked to what is now called George Floyd Square. What we witnessed was a memorial, a tribute, a protest marker, a sculpture…what we walked on was holy sacred ground. The tragedy and outrage of this event unleashed so much, and people came here from miles around to honor the man.

We are here in Minneapolis to provide care and attention to Lisa’s 96-year-old father who has recently begun hospice care. That alone has put both of us in a place of respect for the fragility of life. We are closer to lament and grief.

As we entered the intersection which is blocked off from all vehicular traffic, we were greeted by young organizers offering hand sanitizer and masks. A reminder of the other crisis we find ourselves, namely the pandemic. Ahead of us, we could see a sculpture of dark brown fist in the center of the square with people gathered around.

Some were praying, some taking photos, most just walking in silence. We followed suit. The intersection looks like a labyrinth for walking a prayer circle.

I had the distinct sense of God’s presence, heartbroken on the one hand calling out for justice on the other. We walked through the many memorials, tributes, and calls for action. We were indeed walking on Holy Ground. 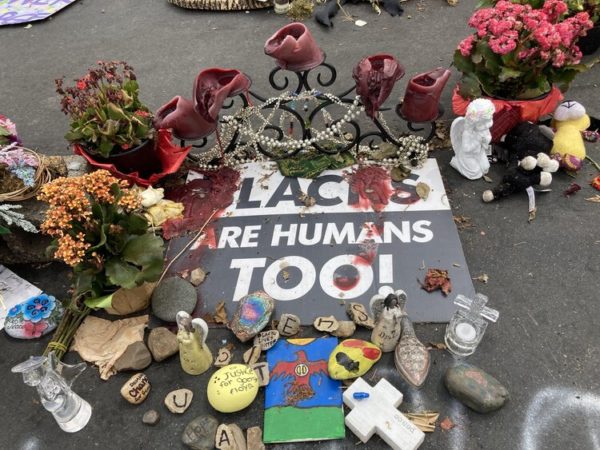