Get Daily Email
Join/Login CLOSE
Home / Featured Content / What Do White People Think When They See Black People Murdered on the Internet? 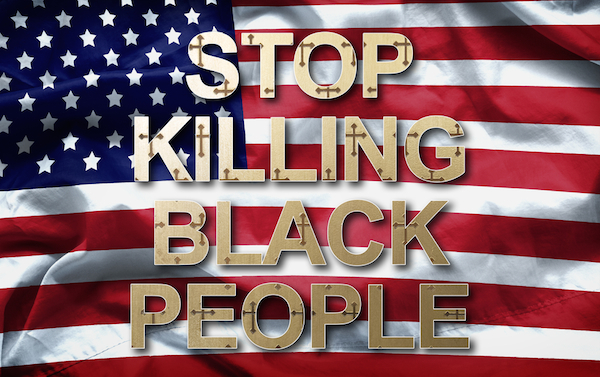 As a black man, I can’t watch the videos anymore, as important as they might be.

My heart hurts. My brain hurts. It’s nothing but unfair.

Within the black community across the country, we’re seeing with time: you can try to avoid it, but there is no way to escape being black in American society. Clearly, it doesn’t matter if you’re poor or rich, uneducated or college graduated, mixed or full.

As this continues to happen, I continue to see an increasing influx of people of color having their “wake up” moment, treating their Twitter feeds how James Baldwin treated his notebook. I can’t help but think of the raw, dark humor I often see on ‘black Twitter’ in particular:

Have we tried capturing footage of police killing dogs on camera? Have we tried that approach to get white people to start caring?

I see lots of colorful profile pictures making colorfully bold statements, but I continue to beg the question: how do my white friends feel about all this?

After all, they’re awfully silent.

What do white people think when they see someone, anyone, killed in a video?

And in particular, what do white people think when they see black people, week in and week out for years now, being murdered on the internet?

I can tell you how I feel, although, with a little reflection and empathy, I’m sure you’d guess.

And let it be known that I am speaking from my own experience and that my thoughts alone do not speak for the entire black community at large here.

I feel sick to my stomach like I’m going to throw up. I feel dizzy, lightheaded, and
groggy — an inability to focus on whatever task I have at hand at any given moment in time. Complementing the physical conditions, I also feel an overwhelming mixture of fear for my life, sadness for those lost, and anger towards the perpetrators. They say the moment before you die, your life flashes before your eyes. I can tell you right now that every time a person of color is killed at the hands of law enforcement, and in particular when the murder is caught on video, my life flashes before my eyes.

It is my personal belief that no one deserves to die, whether or not that person is “guilty” or innocent; I am a believer in schools over prisons, in education over reprimand.

So when I see human beings, black, brown or otherwise, murdered in cold blood, often in the streets of their own neighborhood and surrounded by their community, I immediately think about my own circumstance, or that of my loved ones, my closest friends, my little brother, and loved ones, who also certainly do not deserve it but at any given moment can lose their lives at the hands of the very people designated to serve & protect them. I think about walking through the subway in New York City in 2016 and passing by two [white] police officers who give me a grim look up and down, each with a firm grip on the respective handguns on their waists, mentally assessing whether or not I am “trouble.” I think about my 9-year-old brother running around the playground or the mall, being falsely accused of doing something he didn’t do; after all, Emmitt Till was only 14. I think of my black best friend being pulled over in the dark of night in the middle of Iowa during a cross-country road trip, and how much of a surprise it was when we got let off with a warning. I think about how at any point in time, I could be running through the neighborhood on a jog and be assumed a thief, and that, without any opportunity to defend my innocence, can be pursued and executed as such.

I can go on and on, but for the most part, I think white people can figure this out for themselves if they just gave it some serious thought:

Maybe, imagine a war going on outside; you can’t leave your house because you are in fear of your safety because, say, the Taliban has entered the United States and are going around stopping, frisking, and in the worst scenario killing helpless, innocent Americans.

For black people, the police are the biggest, scariest gang there is.

For black people, the police are like the Taliban. They are terrorists and murderers. Trust me — I know how powerful of a claim that is, but I promise, I am not speaking in hyperbole.

And you know what the scariest part is? Police actually get away with it.

So, what do white people think of all this? Do they avoid videos like many people of color do to avoid the trauma? Do they watch the videos, think “man, that’s crazy,” then keep scrolling? Or do you actually speak up, knowing that anyone being murdered is still a murder and that especially in the hands of law enforcement, something is clearly wrong with the justice system? Or maybe, just maybe, they turn a blind eye because they think black people had it coming.

Amidst this election year, I’ve been having many critical conversations with friends and family and closely monitoring online forums like the New York Times comments sections. Part of my analysis is that it has become a very apparent and uniquely American attitude that if an issue doesn’t directly apply to you, then it doesn’t matter (even though there are ways you can help). It happens with healthcare, it happens with immigration, and it very much happens with police brutality.

As important as the videos are, they have become numbing and overwhelming. But because I am black, I do not have the privilege of ignoring them.

Obviously it’s time for more swift and rigorous action, but first, somehow, we need to invite non-black people to the dialogue, and hopefully (*fingers crossed*) get them to care.