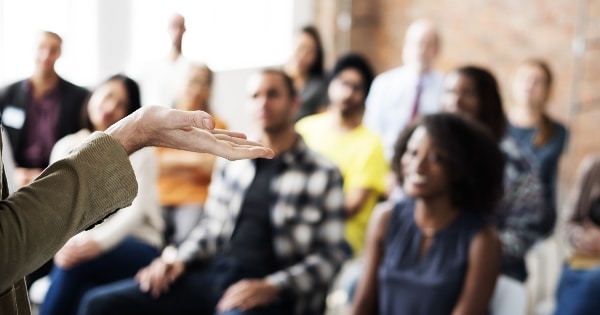 —
Several years ago, I was invited to participate in a weekend retreat called PAX. For two days, a faculty of women teachers lead a group of women attendees through a series of exercises to help them understand why men are the way we are,

why we aren’t so bad if think you about it, and how they can better relate to us. The weekend culminated with a large Q&A session with four actual men, of which I would be one. Being on stage in front of an audience answering questions is my idea of a good time, so I happily agreed.

I got a call from one of the organizers a couple of weeks before the retreat. She thanked me and explained some protocols as well the history behind PAX, how it was founded 20 years ago by a woman who wanted to use her scientific background to better understand men. “Turns out,” explained the organizer, “men just want us to be happy!”

I thought of the advice I received a week before I got married from the Sous Chef at a restaurant where I used to work: “Remember,” he told me. “It’s not your job to make her happy.” He was right, of course, and Jen, my wife, would have been the first to agree. That night after my call from the organizer, I told her about the conversation and about PAX’s mission.

“Oh, my God,” she said. “Men aren’t that complicated. You’re not that different than us. Why do they need a whole weekend to figure that out?” She shook her head. “Are you getting paid for this?”

“No. I just want to do it. I like talking to people about, you know, life.”

“Whatever floats your boat.”

When the day arrived, I joined three other sensitive, thoughtful men on a small stage in a hotel conference room. Before us, sitting eagerly with notepads in their laps, were of fifty or so women of all ages. Their questions were written on index cards and given to us ahead of time. We each chose ones we were interested in, and when it was our turn, we’d read one aloud, and then each take a turn answering it. As the only married man on the panel, I chose questions like, “Do you still find your wife or partner attractive?” and, “What was it about your wife or partner that made you decide to commit to her?”

One of the first questions one of the other panelists read was, “What do you find attractive in a woman? Do you like long hair or short hair? Do you like brunettes or blonds? And what body type do you prefer?”

While the other panelists were giving their answers, I looked out at the sea of women before me, the old and the young, the tall and the short, the thin and the thick. When my turn came, I described Jen, how I’d always been attracted to dark-haired women who looked vaguely Italian or Jewish or Greek, and how much I valued her sense of humor and insightfulness. “But that’s just me,” I said. “I’m sure if you all polled each other you’d find you all had very different preferences when it came to men.”

I had more to say about it, but I could remember how for many years, while I was writing and not selling any books, I would often think, “I just want to publish something–anything.” I wanted the feeling of being accepted, of success, of my writing being read by someone besides me. It was similar to when I was young and single and would think, “I just want to be with someone. Anyone is better than no one.” Then I’d get with anyone and before long started preferring no one.

Driving back afterward, I wondered if one of those women in the audience would actually dye her brown hair blonde if she believed that’s what men wanted most. Of course she would, I thought. We’d all do it in some way or another, carving up our feet like Cinderella’s step-sisters so we’d fit in the glass slipper. If it gets bad enough, you’d sell your right hand just to be happy.

When I got home, Jen was already making dinner. “So?” she asked, smiling. “How was it?”

“Pretty much exactly what you would expect. You’ll be happy to know there are now fifty women in the greater Seattle area who all know I find you as beautiful today as the day I married you.”

She laughed and shook her head. “And so do they understand men now?”

“Probably not. And I don’t really care. You know why?”

“Because I had fun. And that’s pretty much all I ever want.”

Facebook33TweetPinEmailShares33
wpDiscuz
0
0
Would love your thoughts, please comment.x
()
x
| Reply
Share this ArticleLike this article? Email it to a friend!
Email sent!