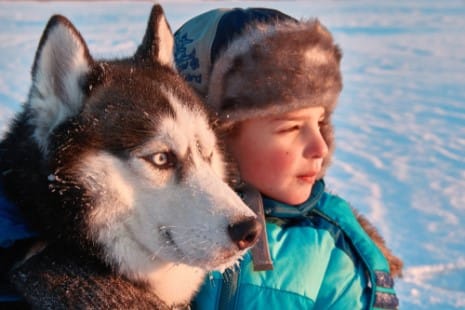 Often people forget that even the best pets can have their instinct flip on in a moments notice. We hear about this in regards to dogs, cats, reptiles, fish, parrots, and heck even hamsters and guinea pigs can get rowdy.

On 3-3-2019, a four-year-old boy was sticking his hand underneath a fence where he shouldn’t have been.

“He had a sock over his hand, so it looked like innocent play.” – J. Cook Captain and Paramedic from the Layton City Fire Department, Utah.

Placing his sock covered arm underneath the fence and waving it around was a massive mistake. Because, a dog with no prior history of aggression ripped off his lower arm and hand, ran off and probably ate it. At this time it isn’t confirmed that he ate it, just heavily suggested.

What about the dogs?

On the other side of that fence were two Siberian Huskies. I know there are people out there defending the breed, but from my experience, lots of the Siberian Huskies I’ve come into contact with are lacking mental stimulation and are under exercised for the breed.

Occasionally we go to the dog park here in Sioux Falls.  When we do go, the only breed that has been a consistent problem for my two golden doodles have been Huskies. For example, one Huskie owner brings her dogs food with her to the park saying “he will only eat at the park.” Dog parks and dog food do not mix, and as a result, the other dogs get excited, and the husky gets aggressive. Because of this situation, she’s placing herself and her dog in, it is one hundred percent the owners’ fault.

Huskies can be a nightmare at the park. Because of that, I usually leave when a husky comes to play. It’s just not worth it the trouble.

Why would a dog do this?

Here are several reasons a dog could do this:

You could have the sweetest dog; however, what can seem like innocent play with a child is often very different through the eyes of a dog.

For instance: my dogs love to rip and tear socks apart. It’s one of their favorite things to do. They also like to thrash their toys back and forth — typical behavior for most dogs.

So if a hand, with a sock on, snuck under the fence in front of my two dogs. I know they would try to take the sock. They would think it was a toy. All dogs are capable of acting instinctually when motivated, and so are people.

It was probably exacerbating for the dogs since they couldn’t see the boy through the fence. Who knows if the boy had time to even yell or scream (which could add to the frenzy). I would bet that if the boy was standing in front of them with a sock on his arm, the outcome would be completely different.

Where were the parents?

Undoubtedly the next question will be: How is a four-year-old running around by themselves (potentially unsupervised- the news has yet to disclose this information)?  Was their a babysitter or a sibling supervising? Had he played with the dogs under the fence before?

It’s important to teach very young kids never to play with or touch a dog without an adults permission.

Ultimately, you know that this is going to come down to the parents of the little boy. The guilt they will carry will be enormous. Parent shamers are going to flock at the opportunity to say what they should have done differently. Accidents happen. This happens to be a big accident.

So who is to blame?

No one is to blame. But two parties are going to greatly suffer as a result.

This probably isn’t going to be a popular opinion as currently, both Huskies (even though only one was the offender) are locked up in animal control awaiting their fate.

Is it fair that the dogs, with no prior incidents of biting or aggression, will possibly be put down because something invaded their space?

Or should the parents be sent to parenting classes?

Only time will tell how this story will unfold. As a parent, I feel terrible for that family and the child with a life long lesson where his hand should be. As a dog owner, I feel heartbroken for the dogs, acting as dogs s when something invaded their space that looked a lot like a toy.

No one is going to walk away from this from this tragic event unchanged.

I am Murphy’s law in action (if you doubt that, ask my husband). I like to say I'm a classy lady when in reality I put on red lipstick and run around in my pajamas. I’m a parent to a teen, wife to an exceptional husband and dog mom to two unruly doods (Rumple and Rosie). I try to swear less, sometimes this cannot be avoided, and captain cuss word shows up (this usually occurs directly after Murphy's law has kicked in, it's a vicious circle).