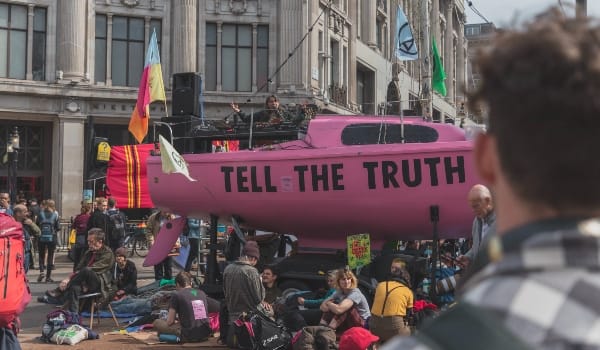 —
As fossil fuel advocates have increasingly lost the battle for public opinion, they are increasingly turning to government repression as a way to pursue their policy preferences. According to the US Protest Law Tracker, since the election of Donald Trump 14 states have passed new laws and executive orders increasing penalties and otherwise criminalizing environmental actions. 35 states have considered such bills.

One such bill is Illinois bill HB 1633, based on a model propagated by the Koch-backed American Legislative Exchange Council (ALEC). “This bill is not about protecting private property or public safety; Illinois already has criminal laws against trespassing, property damage and similar offenses,” said Khadine Bennett of the Illinois ACLU. “This bill is about one thing: imposing excessive criminal penalties in order to chill environmental protests.”

Anti-protest laws have often been used in the past to restrict such labor tactics as picketing, public meetings, and protests. However, the Illinois AFL-CIO recently joined with the Illinois Manufacturers Association to support HB 1633.

This post was previously published on [site name] and is republished here with permission from the author.