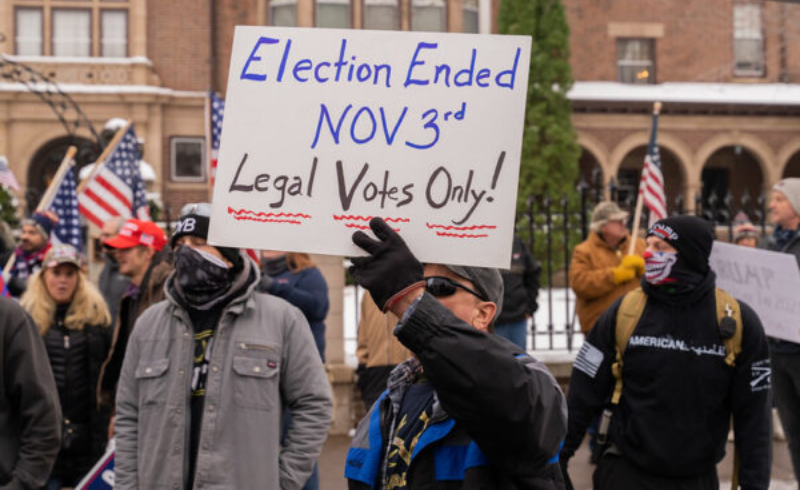 The new year is here,  we have a new president and a vaccine. Life seems to be improving. Smooth sailing now, right? It’s always the still waters that are difficult to navigate, the pleasant scenery that hides the worst ambush, when you think things are going well that’s when things go bad.

Turns out the election may never end. It has more moving parts than anybody knew, The Rube Goldberg presidential election contraption.

First, the people voted, and that took forever. Mail-in ballots, early voting, endless lines wrapped around featureless blocks of time, stretching off into a lengthy, tangled stream of democratic participation. It was the greatest show of enthusiasm this country has ever seen. It was an endless stretch of waiting, listening to the news, checking websites, it lasted for years. Finally, a winner was announced. Joe Biden. At long last our nation could begin to heal.

Wait, hold on, the electoral college, one of the most arcane, pointless organizations in existence, would have to cast their ballots before we could be sure. Rumors of insurrection and defiance twined through the American consciousness. There was an aroma of the absurd, a comedy of errors floating across the landscape. Would the electors impose the will of the people or would they follow the gospel of the lost? The day came and went and in an anticlimactic finish, they announced the winner,  Joe Biden. At long last, our national trauma could end, and we could move on.

First, though, we have to have congress, another foolish, self-important organization that is just dying to appear to have outlived its usefulness, ratify the electors’ approval of the will of the people. What? On January 6th allegedly they will approve the results and we will have a new president. Voting isn’t as easy as I thought.

Will it never end? Not if Senator Josh Hawley, Republican (of course) from Missouri has his way.. He is going to “object to the electoral college results.” In one last (I hope) act of desperate, pointless denial Senator Hawley is going to refuse to acknowledge the truth. He is going to say the election didn’t count because the president lost, and he wanted him, the president, to win.

Let’s just assume congress ratifies the electoral college approval of the election is it over?  Or is there more? Do we have to wait for another step in this treadmill of approvals, and rubber stamping and glad-handing. Do we need the Senate, the Girl Scouts and the International Brotherhood of Electrical Workers to nod in agreement?

Maybe we should just let Senator Hawley select the next president, he might feel more involved if we let him choose. That wouldn’t really be fair to the rest of the senators, or the Girl Scouts, not to mentions the IBoEW (International Brotherhood of Electrical Workers). We can’t let everybody choose the president, or maybe we could?

Maybe we could all get together, kind of, and each person could choose who they want to be president. Then we could add up all the choices and the person who is picked most often can be president.

Nah, that’s probably too crazy to ever work.