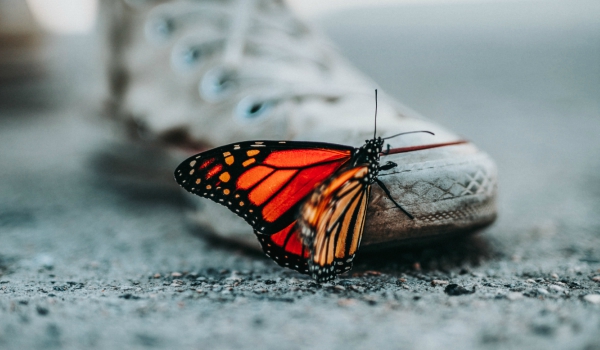 Do you know that Coldplay song, Viva La Vida? The one with the strings and choir that tells the story of a fallen king:

I used to rule the world
Seas would rise when I gave the word
Now in the morning, I sleep alone
Sweep the streets I used to own

I’ve always wondered why it’s such an upbeat song. Why it’s called “long live life” when it’s about someone who’s lost everything they had in theirs. Well, Chris Martin, lead singer of the band, once explained the title.

When he was in Mexico, he went to a museum, and, in there, he saw the last painting Frida Kahlo ever made. It’s called Viva La Vida.

If you know anything about Frida Kahlo, you’ll consider a bunch of half-eaten watermelons a strange choice of image for a painting she knew would likely be her last.

Kahlo was a Mexican painter, active between the 1920s and 40s. She mainly drew self-portraits, sometimes realistic, sometimes surreal, to explore what it means to be Mexican, a woman, and a human being in general at the time. While she was alive her work only found moderate success, but since the 90s, she’s become an icon in art, feminism, and the LGBTQ movement.

In her paintings, Kahlo dealt with serious topics. In her life, she constantly struggled with health issues. Infections, abortions, spine problems, polio, depression, an appendectomy, you name it, Kahlo had it. She died at just 47 years old. And yet, there’s this painting. Her last painting. This beautiful, innocent, life-affirming painting.

What was she trying to say? 65 years later, no one will ever know. What we do know is that water is life and melons are sweet. They remind you of having fun. Swimming. Parties. Music. Summer. And then, etched into that joyous fruit, “Long live life!” It’s a real middle finger to all her pain and haters.

At least, that’s what Chris Martin thinks. “She went through a lot of shit, of course, and then she started a big painting in her house that said ‘Viva la Vida,’” he told Rolling Stone. “I just loved the boldness of it.”

That is bold, isn’t it? To stand up for yourself in all this mess. To say, “You know what? I am good enough. I am just fine and I’m gonna do this thing whether you all like me for it or not.” That’s just about the definition of bold.

It’s also what I hear every time I listen to Coldplay’s song — whether I like it or not. I wonder if the band did that on purpose. They made a song so catchy, so uplifting that it just sweeps everyone away. Like some 90,000 people in São Paulo, Brazil. The crowd is mesmerized. Enchanted. It’s like they’re all being carried to some higher plane. And then, Coldplay added the darkest lyrics they could think of — so we would sing the words just to spite them.

“My empire has fallen, yet here I am, singing my song anyway.” Viva La Vida. Long live life.

Do you know who else is still singing his song? Thomas Middelhoff.

Middelhoff was the biggest, best-paid CEO in Germany from 1998 to 2002. He led Bertelsmann, a huge media company. Here he is in 1995 at the Allen & Company Sun Valley Conference, sitting behind Jeff Bezos and in front of Bill Gates. Glasses, dark hair, blue shirt — that’s him.

If you study that picture a little more closely, you’ll see it depicts the center of the known universe at the time. On the far left, there’s Steve Jobs. There are also the CEOs of News Corp, NBC, and AT&T. Also on this picture: the founders of Yahoo!, AOL, and the heads of Time Warner, Walt Disney, DreamWorks, and The Washington Post. Michael Bloomberg is front and center. Talk about a well-connected man. Then came the allegations.

In 2014, Middelhoff was sentenced to three years in prison for tax evasion and embezzlement. The total sum? $500,000. It was an unprecedented case in the world of German white-collar crime. No one expected this outcome, least of all Middelhoff. Usually, someone with his status, money, and network would get slapped with a fine. After 2008, one top banker went to jail. One. And those were billions.

Regardless, the judge set an example. And into the joint, he went.

While in jail, Middelhoff lost everything. His health, his money, his family. But he found one thing in return: himself.

At the height of his power, Middelhoff would take a private helicopter to a private airfield where he would board a private jet, taking him to the best suite in the best hotel so he could meet the best people there. Whether you’re 45 or 25, that goes to your head fast. Looking back, Middelhoff says, “I never set out to be an asshole. But I was one. A big one. And I just didn’t notice it anymore.”

Middelhoff served part of his sentence working in an assisted living facility for the disabled. He says the warmth and gratitude he received there far outweighed any human reaction he’d gotten in his time as a first-class manager. “When you wheel someone who’s in a wheelchair, and they stroke your hand and say, ‘Thank you,’ that’s a lot more than the thanks of a business owner whose equity you’ve just increased 8x.”

It’s as funny as it is tragic. You can turn $20 million into $160 million for someone, and all you’ll get is “the deal was great,” an expensive bottle of champagne, and an extra $4 million at the end of the year. But no genuine thank you. No real emotion whatsoever.

At the same time, whoever’s less fortunate than you, whoever has a disadvantage they can never make up for, will be grateful for even the tiniest interaction. A kind word, a pat on the back, a joke at your own expense. Those are free to make for anyone. $0 million needed.
For Middelhoff, it took for his bank account to go all the way down to that number to realize it was always like this in the first place. He didn’t need to beat everyone. He just needed to be Thomas. That guy was enough.

Middelhoff was released in 2017 with literally nothing to his name. Today, he lives a quiet life, writes books, and gives talks to young managers. He tries to remind them, “Don’t let your ego overtake your character.”

His maxim for his speeches is a quote from famed basketball coach John Wooden: “Ability may get you to the top, but it takes character to keep you there.” That’s a good mantra for anyone who aspires to success, Middelhoff thinks. “No matter what you do, have the courage to keep your character. Keep working on it, but always in the right direction.”

We haven’t had a king in Germany for a long time, but if you had been looking for a modern-day equivalent in 1999, you’d likely have settled on Thomas Middlehoff — and boy, did he fall. All the way down. And yet, here he is.

Sweeping the streets he used to own, happier than he’s ever been. Viva La Vida. Long live life.

Maybe, that’s what the song is really about. It’s positive and light-hearted because the king is glad to be rid of his empire. He had to take this rollercoaster ride all the way up and all the way down, just to remember he is enough.

Shattered windows and the sound of drums
People couldn’t believe what I’d become
Just a puppet on a lonely string
Oh who would ever want to be king?

I’m not here to tell you whether you should aspire to be a king or not. I want to be rich as much as anyone. Maybe, you want to be a famous painter, lead singer of a hit band, or the best-paid CEO in your country. Maybe, you prefer a quiet life and want to focus on your health, raising your kids, or being a local activist.

Whatever you want, I’m here to tell you that, at the end of the day, all of it boils down to the same thing: Letting yourself be good enough. That’s your real job. Your only job. To accept that, right now, you have everything you need. The person you are today is the perfect fit for today. Notice how tough that is to believe? But it’s true. You really are good enough.

Remembering this fact is a job because you have to show up for it every day. If you forget it, you can’t draw any watermelons. If you lose sight of it, you can’t hold the success you attract. And you can’t sing that beautiful song when the world is collapsing around you.

Facebook62Tweet2PinEmail1Shares65
wpDiscuz
1
0
Would love your thoughts, please comment.x
()
x
| Reply
Share this ArticleLike this article? Email it to a friend!
Email sent!