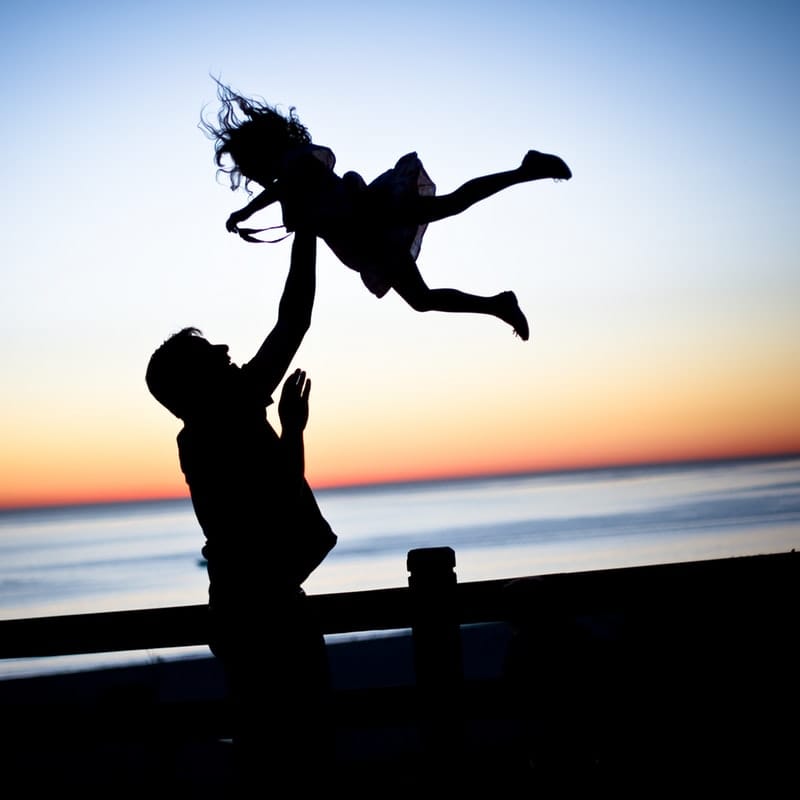 A lovely side effect of having many wonderful women in my life is having the privilege of knowing some of their amazing fathers. These men come from every corner of the world, work in all kinds of industries, and adhere to various belief systems. Most of them don’t have one single thing in common with the next unless you count having a daughter they don’t know how to communicate with (it counts). Each of these men, at one point or another, have found themselves on one side of an invisible wall. From the other side of that wall, my friends shrug and say things like, “My dad and I were close when I was little.”

From the conversations I’ve had with dads of daughters over the years, I’ve concluded that for a lot of them, it’s just hard to know what to say. Dads, hear this. No matter how eloquent you might be, there will be some silences you won’t know how to fill. That’s both inevitable and OK. Thankfully, you don’t have to be a poet-philosopher to speak these foundational truths into your daughter’s life.

Here are some essential messages for the next time one of those silences feels particularly deafening.

I’m listing this affirmation first because I firmly believe the earlier you admit this to your daughter, the more chances you have to fail her well. You’re imperfect, so there’s a good chance you’ll say the wrong thing at the wrong time, lose your temper, or blow her off when she’s trying to connect with you. But you can be certain that you’ll miss out on a critical chance to earn her respect if you never admit to being wrong. In a world that holds women to impossible standards of “wholeness,” your daughter has to know she is allowed to be wrong. If that permission is reflected in your life first, you can redefine those standards for her. If you show up with all of your failures (past, present, and future) she’ll be encouraged to do the same.

2. “Everything changed for me the day you arrived.”

Since it’s rather likely you’ll be the first man to love her, you cannot remind her enough times that her presence in your life has fundamentally changed you. Talk to her about the memories you have of her life, starting before her own memories began. For your adopted daughter, continue to reinforce the shift that took place when she came into your life. She needs to hear that she has deeply impacted you as a man. Laying a foundation of vulnerability in the way you communicate with your daughter effectively undermines anyone’s future efforts to emotionally manipulate her. She won’t look twice at the man who makes women starve for his attention. That approach won’t remotely resemble love to her.

One of the greatest challenges I hear fathers (especially new fathers) talk about is the vast love that having a daughter opens in them, and the accompanying horror of not knowing what to do with it. Even though it’s rooted in deep love, if that paralyzing fear becomes the primary lens through which a father relates to his daughter, she will feel diminished. I’ve heard more than one parent describe their children as walking extensions of their own hearts. (To me, as a childless person, that sounds just about as terrifying as it probably is.) But you must manage this tension. Harsh as it may sound, it’s not your daughter’s job to emotionally interpret you. Instead, empower her by having an honest conversation about why your love makes you vulnerable.

One of the most pervasive and annoying stereotypes I hear about men is that they are bad listeners, or otherwise, just don’t pay attention. I don’t think that’s true, but I can acknowledge that many men don’t understand how important it can be to a woman that the small things do not go unnoticed. Go out of your way to notice something small about your daughter. It might be the way she looks out for excluded kids, or that she’s absolutely killer at parallel parking. It really doesn’t matter what. It just matters that you noticed. Make the act of noticing your daughter a consistent priority, and you’ll slide the bar up a notch each time.

5. “Your power has always been there, and I want to help you claim it.”

One of the best ways to encourage your daughter is to remind her that her strength doesn’t come from anything outside of her own being. Society will either ridicule or capitalize off of every insecurity she has, so remind her of the strength she innately possesses. A lot of dads I know show their love through acts of service, and I can understand how much easier it is to rely on doing things for her if you don’t talk much or spend a lot of one-on-one time together. Don’t get me wrong, these acts mean a lot, but so does empowering your daughter so that she doesn’t feel reliant on another person. My dad and I bonded over cars when I was a kid. He taught me to drive a manual and change my own tires and oil. YouTube could have taught me those things. But having my dad usher me into his space (in that case, the garage) meant he acted as an accessory to me stepping into myself. So now, when I want to learn how to do something, I’m not asking around for permission.

Perhaps now more than any other time in history, it’s a terrifyingly beautiful time to be raising girls. We have a long way to go before women’s bodies and minds are no longer considered to be material for male development. But the conversation is shifting. We have begun to raise our children differently. Dads, you are some of the most powerful agents of these changes. You can help usher your daughter into occupying her own space without apologizing along the way. You know better than anyone how much magic she has, and your gift is getting to be there to see it first.

Damaris is a creative idealist with a passion for social justice. She has worked for several non-profit organizations in the spheres of international development, refugee resettlement, and humanitarian aid. When she isn't navigating the world of U.S. immigration law, she works from her at-home art studio in Los Angeles, trying not to get paint on the furniture.

Facebook54TweetPin3EmailShares57
wpDiscuz
0
0
Would love your thoughts, please comment.x
()
x
| Reply
Share this ArticleLike this article? Email it to a friend!
Email sent!