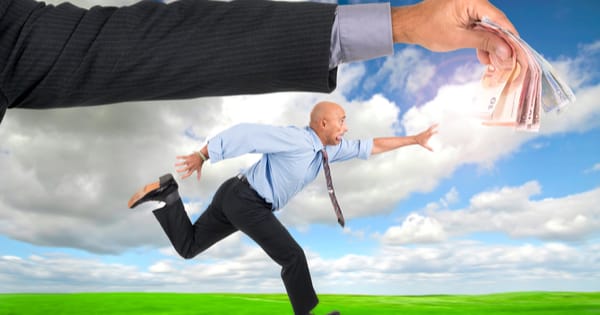 “Some people are so poor, all they have is money”-Patrick Meagher

Your ambition is poor if it is all about making money. Money is not the end; it is a means to the end. Garth Brooks said, “You aren’t wealthy until you have something money can’t buy”. Life is not all about money. It is living out on something that outlives you. The true worth of a man is not measured with money; it is measured by the object of his pursuit. John C. Maxwell said, “Most people are capable of making a living. The significant thing is making a difference”. Life is about making an impact, not making an income.

Former President of the United States of America, Barack Obama once said, “Focusing your life solely on making money shows a certain poverty of ambition. It asks too little of yourself. And it will leave you unfulfilled.” When the ambition of a man is chasing after money, wealth becomes elusive. Most of the richest people in the world were just trying to solve a problem and ended up becoming the richest. Mike Murdock said, ‘’Money is the reward you get for solving someone’s problem’’. It is fraud when you plan to get money without solving a problem!

Aliko Dangote, the richest man in Africa said, ‘’Every morning when I wake up, I make up my mind to solve as many problems, before returning home.’’ Dangote was passionate about solving problems and undoubtedly became the richest in Africa. Bill Gates, who has remained the world’s richest man for several years is a philanthropist committed to giving 95% of his fortune to charity. It is not unusual that the man noted for solving most of the software problems in the world eventually became the richest. Money has a path; it will always flow to the direction where problems are solved. The world of today is more effective just by looking through Bill Gates’ windows!

Horace Greeley once said, “The darkest hour in any man’s life is when he sits down to plan how to get money without earning it.” The poor chase money while the rich attract money. The right way to make money is not chasing it, but attracting it. When the ambition of a man is chasing after money, wealth becomes elusive. The youths are in a mad rush for money and material possessions. The unemployment rate in the nation is alarming because youths have not realized their latent potentials and the value they have to offer to the Nigerian system. To add value to our nation we must be value oriented. You attract money by solving people’s problem, meeting people’s need, seizing opportunities, and following through on great ideas. Chase people’s needs and not money! There might not always be money to spend, but there will always be problems to solve. Stop chasing money, look for problems and solve them.

The truth is: money is just a reflection of the value you give to others. So the more you solve problems, the more money you will make. Some people are only passionate about doing anything just to get money while great people are passionate about adding value to people’s lives for profit.

In his best-selling book, “The Purpose Driven Life: What on Earth Am I Here For?”, Rick Warren summarily emphasized that the purpose of life is simply to live a life of purpose. When a man pursues purpose, money comes ultimately. The great Ralph Waldo Emerson said, “The purpose of life is not to be happy. It is to be useful”. When a man pursues purpose, fulfillment is inevitable. When a man pursues money, then fulfillment will always be elusive. It is only people that are driven by purpose that will ultimately be relevant in life. The pursuit of money alone will always make you inconspicuous in the crowd.

George Washington Carver once said, “No individual has any right to come into the world and go out of it without leaving behind him distinct and legitimate reasons for having passed through it.’’ The issue of young people running after money without any definite and concrete plans to add value to the world is appalling. We seriously need to re-orientate our youths on the need to have a sense of value. We need a renewed thinking approach to wealth. Wealth is not all about money; it is about adding value, solving problems, and leaving the world better than we met it. Money is not everything! Myles Munroe said, “Wealth is given to fulfill purpose and divine assignment. You were not born to make a living but to make a difference.” What you drive is not as important as what is driving you.

There is a form of poverty that money cannot cure! Poverty is not the state of your bank account, it is actually the state of your mind. Some people are perpetually blocked from wealth because of the way they think, and the people they surround themselves with. A wealthy man understands that there are some central and critical things in life that money cannot buy. Money cannot buy MANNERS, MORALS, CHARACTER, COMMON SENSE, TRUST, AND INTEGRITY. Whether spiritually, mentally, materially, or socially, poverty is extremely contagious, be mindful of who you associate with. One relationship can make you mentally poor for life!

An average youth should be a solution and not a problem in the contemporary world. Let us stop the ‘mad’ and ‘demented’ rush after money; let us proffer solutions to problems and earn money legitimately and credibly. Work hard towards evolving an idea that will solve problems and not just make money the object of your pursuit. Pursue ‘meaning’, value, and purpose. To the youths, I say, ‘’We are the solution that the whole world is waiting for’’. We need to all ask ourselves this question: Am I in pursuit of money or meaning?

Facebook8TweetPin2EmailShares10
wpDiscuz
Share this ArticleLike this article? Email it to a friend!
Email sent!