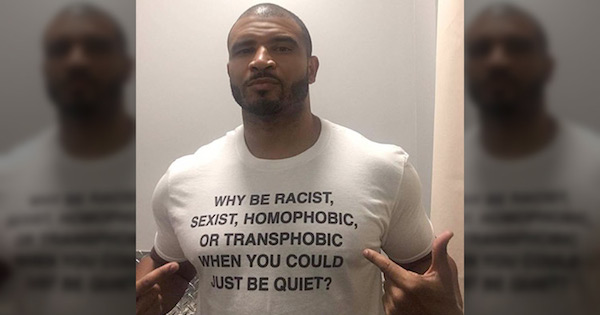 DeMarco Majors is super excited to talk about his involvement in Born Stars the upcoming web series about four trans guys he’s producing and because he loves the questions some people have been giving him about it.

Majors feels like this is a particularly critical moment in history for a show depicting trans masculine life in America. But don’t get him wrong, “It has always been important. However, I believe it’s got major social currency and relevancy now because history is approaching an era where visibility is being rewritten by the Trump Administration. Historically we have seen so many amazing people achieve some of the most extraordinary things and then subsequently left out or erased out of history. This story in particularly will create its own chapter in our history books and give people hope.”

Majors unlikely path to producing a ground breaking show about trans masculine life had twists and turns that began when in his senior year in college, he got the opportunity to play ball professionally — in Argentina. He jumped at the chance and eventually played in Australia, Brazil, and in Hawaii (in the American Basketball Association). He came out along the way, becoming one of a few publicly out gay pro basketball players in the world, and garnering a spot on the 2007 Out 100 list.

He’s since become a model and actor, starring first in the Logo reality show Shirts & Skins (about the all-gay basketball team The Rock Dogs), then in the stage adaptation of James Earl Hardy’s bestselling novel B-Boy Blues, directed by Stanley Bennett Clay. He was also the male lead in Beyoncé’s “Freakum Dress” video and had guest spots on Law & Order and Blue Bloods. Most recently, he wrote, directed, and stars in the forthcoming film, 7.

The onetime underwear model has become a personal trainer, with a knack for motivating clients. He finds his own motivation, he insists, in his personal relationship with God.

What’s really inspiring is the that Majors identifies with the four young men who he says come with the same insecurities as a man, the same dreams, and similar walls being placed in front of them that he’s experienced. “When I see these men I see myself and because I have been so fortunate to have overcome, accept and grow in many areas I felt it would be a privilege to learn from these amazing men and to work on a project that would allow each one of us to tell a story of triumph together.”

Majors notes what in particular dovetails with his personal beliefs is that, “I know what it’s like to feel you are in the wrong body, uncomfortable in your own skin… I know what it feels like to be present but invisible. I understand what it feels like to be this amazing person but because of society standards of normal no one could ever truly experience the man I am and to become. So I had to learn and unlearn the definition of discourage and join the journey of courage. Discourage to me is when you distance yourself from courage. Through fear, insecurity, and disbelief. However, this particular story resonates with me because I took a chance on me and fought the demons of my existence. So I fought my fears, my insecurities, and the limiting beliefs I learned.  I’ve learned to accept in struggle, sown in faith and reaped in strength of character. When I look at the story line of this particular show and at myself. I realize that I am a grain of sand placed at the edge of the ocean during a thunderstorm about to be used for something bigger than myself or what I could ever imagine. When I look at the work I do daily at Training Loft in WeHo. I see everything I fought to overcome become a strength in my character and learning more about each person on this show become a positive gift to my journey that will also heal others. And myself during the process.”

Majors adds, “This show will not just open doors—it will blow them the fuck off — living free in the truth of your respectful identity. So however you choose to identity yourself this show will teach others how to love from a genuine place and respect the human experience.”

DeMarco Majors is an ex pro-basketball player, actor, model and TV host. During the course of his remarkable athletic career, Majors played for teams in Australia, Brazil, Argentina and the American Basketball Association. As the only pro- basketball player to ever come out before retirement, Majors broke ground in dealing openly with prejudice and homophobia in the world of professional sports. Because of his personal experience, he is now a spokesman for gay athletes, and in 2008 he was named one of OUT Magazine’s top 100 most influential gay men and women and in 2017 he was featured as one of the most influential LGBT people in The Advocate‘s 50th Anniversary issue.

Facebook230Tweet2PinEmailShares232
wpDiscuz
Share this ArticleLike this article? Email it to a friend!
Email sent!