Get Daily Email
Join/Login CLOSE
Home / Health & Wellness / Why Does My Cat Have Health Insurance, But I Don’t? 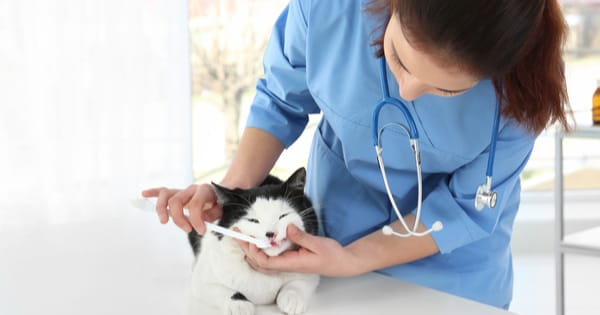 Meet Robbie, short for Robert Bobert Bloom. Robbie is a tabby cat with mottled gray and black fur, and the sweetest disposition you could ask for. Robbie lives with me, in a small apartment in downtown Los Angeles with two other human roommates, lots of surfaces to scratch and nibble on, and a long hallway to run down.

Robbie is the only cat I’ve ever met who loves to play fetch. That’s right, fetch! He’ll trot up to me with his favorite toy in his mouth, a little orange-and-white striped BB-8 droid from Star Wars, and stare up at me with wide yellow eyes full of enthusiasm. I’ll fling the spit-flecked droid down the hall, and he’ll gallop down, fetch the thing, then bring it right back, eager for another try.

I love the little guy with all my heart. Human roommates are fine, whatever, but sometimes, the love of a great animal is what gets you through another day in this town. I love him, even more, when he meows through his little toothless mouth. What happened to his teeth? Therein hangs the tale of why my cat has health insurance and I don’t.

Have you heard of feline tooth resorption? It sucks.

Robbie was two when I noticed he was chewing in a funny way. He favored one side of his mouth, tilting his little head and chomp-chomping the exact way my grandpa attacks beef jerky when his dentures hurt. When I checked his mouth, my stomach dropped. One of his teeth looked completely rotten, and another was clearly decaying near the gumline.

I rushed him to the vet ASAP and he was diagnosed with feline tooth resorption. This nasty little disease causes cats’ teeth to erode into nothing. Incredibly, we still don’t know the cause, even though it’s becoming more and more common. The vet said it could be something bad in the cat food, or even an autoimmune disorder where Robbie’s body was attacking his own dentin!

In any case, there’s only one treatment: tooth extraction. All Robbie’s teeth were showing signs of decay, so they’d all have to go. I started to panic a little. I couldn’t afford the procedure. When you’re living in downtown LA as an aspiring screenwriter, taking PA jobs and driving Lyft on the side, the cash isn’t exactly rolling in.

That’s why I went with pet insurance. I was amazed when I saw how cheap it was: $30 a month for all of Robbie’s medical care? One night of driving could easily cover that. Robbie got his teeth pulled and he’s been on painkillers, but he’s doing fine. He enjoys his new soft food diet and he’s back to his old self, fetching BB-8 all afternoon.

Now as for me. I don’t know if you’ve noticed (if you haven’t, you’re lucky!), but good health insurance is hard to come by for us struggling humans in the US. I would love to have health insurance. Of course, I would! The Writer’s Guild of America has amazing insurance (and a pension! Imagine that!) that generations of writers have fought hard for.

But that’s the dream. That’s not where I’m at. Here are the facts:

It’s scary. It’s good to know that Robbie is taken care of. But I’m sure glad he doesn’t know how precarious his human’s situation is. You probably don’t need me to tell you this, but healthcare and health insurance in this country is a problem that needs a systemic fix.

The One Time I Went to the Dentist

So my cat had to have all his teeth pulled. Here’s the story about his human’s brush with California dental care.

I was a PA on a film shoot in Glendale. Normally when someone’s carrying something around the set that you shouldn’t whack people with, like a metal pole, everyone says “points!” and frazzled PAs like me scurry out of the way. Well, said metal pole was bobbing along in the arms of our key grip when I yelled “points!”

Oops. Clipped in the mouth. I felt my teeth for damage, and sure enough, a molar was chipped. After some frantic apologies and people with clipboards yelling at other people with clipboards, I was speeding down the 2 on the way to a Larchmont Village dentist, who was recommended by one of our actors.

I was nervous when I strode into the office of Shervin M. Louie, DDS. This was one of those “off” months when I didn’t have dental coverage. I explained that to the front desk person, out of breath, but she was calm and accommodating. When I sat down and flicked through the website, I saw that this guy does dental work for Alison Brie and Kumail Nanjiani! I looked around, prepared to be starstruck, but sadly, neither of them walked around the corner and offered to pass my pilot script along to their agent.

Dr. Louie fixed that chip in no time. A quick filling and I was on my way. We got me on a payment plan that worked for this cash-starved poor person. I may not have insurance, but at least there’s one dentist out there I can visit without having to worry.

Now let’s get me into the Writer’s Guild so I can get insurance and write that heartwarming TV episode about the toothless cat who plays fetch.