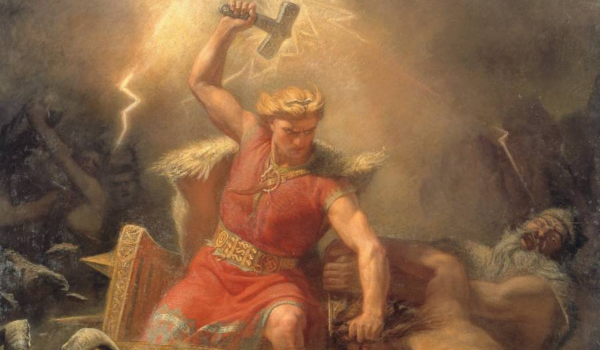 Nowadays there aren’t as many battles and raids as in the age of the Vikings, so naturally the way in which the norse Gods are portrayed has changed too. In an age of increasing globalization, religion has a much less central role in society as it used to. People in the West have access to social media are not usually living day-by-day, their problems are much less worse than those of the Vikings hundreds of years ago. Nowadays people do not project their fears and needs on supernatural entities, unless they are characters on TV shows. Are modern day pop-culture characters and internet personalities the equivalent of gods in norse mythology?

The first example that comes to mind when thinking about mythology in pop culture are Thor and Loki from norse mythology in the Marvel comics and movies. There have been multiple discussions on how they have been portrayed, but they all have one point in common: they were not like that in the original texts or telling of the stories. However, Marvel molded them in characters that would fit their usual topos of “hero” and “villain” while retaining some of their original traits. While the reality of these two figures is a lot more complex than that, this proves that they are adaptable and versatile, and all Marvel really did was adapt them to today’s Western culture: one of consumerism.

According to the German philosopher Ludwig Feuerbach, the traits that humans associate with God in Christianity correspond to the fears and needs of humans.* He lived in the 1800s so religion was a little different back then. However, we can apply his concept to populations in Scandinavia and their pantheon of gods. Most of the stories in Norse mythology involve some form of fighting and, as we know today, Vikings used to travel and fight a lot to conquer resources and territories. Their most important Gods were associated with strength, bravery, ability to procure resources, and fertility, all things vital to their daily lives. Their afterlife was divided into two groups: those who died valiantly in battle, and those who didn’t. Even the afterlife for those who did die in a noble way consisted in going to battle, feasting, and doing it all again the next day. There was a lot of fighting involved.

If the Vikings used to praise Freya for her beauty, nowadays people warship beauty vloggers and fashion models. Thor, the god of thunder and mighty warrior, has now been replaced by bodybuilders and fitness models. These ancient gods were not perfect in the same way as Catholics envision their God, they had virtues and faults, they were much more similar to humans. Therefore, the analogy is not as far-fetched as one might think. All of the pop-culture characters venerated by “fanboys” and “fangirls” all over do not exist in reality, but they do have a really strong impact on some people’s lives. All of these “influencers” on social media, with a follower base of thousands, do exist and are human beings, but their power of influencing people is really just there because people choose to be influenced by them. They might be good entertainers, but they themselves do not really have that power, it is bestowed upon them by their followers, who can very easily unsubscribe and stop following them and their trends.

In current times, life is a lot more fast-paced because of all the technological advancements we as a species have achieved. We have made certain aspects of life so much easier than thousands of years ago (or even decades), and yet we still feel the need to project outside of ourselves and create characters for our fears and needs. However, these latter two elements have changed since then too, and the figures we hold accountable are no longer the same, and neither is our relationship with them. Nowadays people have much more agency, and can easily choose to stop following a certain influencer without any consequence to their well being, even though they might have worshipped them until not long before.

Media (especially social media) have made us aware of the freedom we have from supernatural entities, but, ironically, they have also helped us create less anachronistic replacements for them.

This post was previously published on DigMedia and is republished here with a Creative Commons License.