Get Daily Email
Join/Login CLOSE
Home / Sports / Being a Pro Athlete: The Good, the Bad, the Ugly 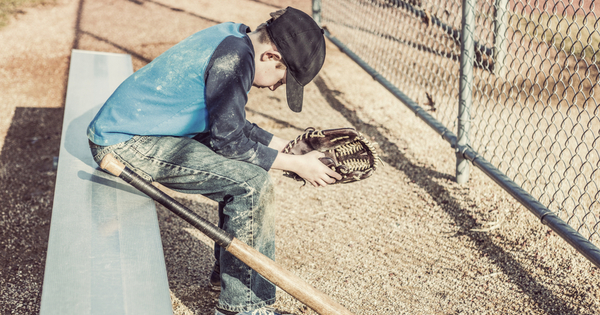 Being a professional baseball player is one of the proudest achievements of my life, it made me feel like a god amongst men, like I had fulfilled a destiny that was pre-ordained for me before I ever set foot on this Earth.

But, it has also made me feel like an infant among men, like a failure, and sometimes like it was more damaging than it was beneficial.

Have you ever been part of team? Whether it was in sports, in your family, at work, among your group of friends or with a significant other. Where the camaraderie was out-of-this-world and you genuinely enjoyed being around your teammates every single day, doing what you love to do and working together toward a common goal.

Now imagine GETTING PAID to do this…
That was my reality for a decade of my life!

I got to hang out with my buds, put a uniform on, play with a baseball, interact with fans, sign autographs, travel to different cities, meet new people, compete to win a championship… and I collected a paycheck every two weeks for doing so.
Can life get any better?

Baseball was all I wanted to do since I was a kid. From the moment I walked onto a field and got to have fun with my teammates, I knew I wanted to be a Big Leaguer.
People would ask me what I wanted to be when I grew up and without hesitation, my answer was always “baseball player.” There was a time when my mom planted the idea of being a doctor and baseball player simultaneously, and I actually entertained the idea in my head for a while. Then, as I got older, I realized how unrealistic that idea was - along with the extra amount of schooling I’d have to endure - and I dropped that idea very quickly and stuck with baseball… much to my mother’s chagrin.

I remember my name getting called on that August day in 2003 as the Tampa Bay Devil Rays selected me with the first pick of the 6th round. I was ecstatic! I couldn’t wait to get my career started and begin making my way to the big leagues.
I’ll never forget getting to my first spring training and meeting guys from all over the country and all over the world, many of whom would go on to be my teammates and future Major Leaguers. I felt like I was exactly where I belonged and where I was meant to be.
The next decade would be the best of my life although it would be a roller coaster ride of emotions, but a roller coaster I was more than happy to be on.

Although I was getting to play a game that I played as a kid and getting paid to do so, just like with anything in life there would be eventual pitfalls, setbacks, and failures. When you’re an athlete, you have this confidence (I would argue that you NEED this confidence) that you can do anything in your given area of expertise. You have to believe there is nothing on the field you can’t do and you have to believe you will best your opponent every time out. If not, why the hell are you even playing?

But, this confidence in yourself can be a double-edged sword and you can easily cut yourself if you’re not careful in how you handle it. This confidence should be balanced out by a certain amount of humility, something that I struggled with until I figuratively got knocked on my ass a few times. Even then, I still had this belief that I was the best.

Eventually, as all athletes can attest to, you get to a point in your career where Father Time starts catching up to you and your skills begin to diminish, as much as you may be in denial about it. If you don’t begin to tap into that humility, things can start to get bad very quickly, which is what happened to me.

I was so confident in my abilities, that when my production started to slip and I eventually lost my starting job, I had a huge blind spot that didn’t allow me to look in the mirror and take responsibility. Instead, I began to pout like I was still in Little League and I blamed others, mostly the team and the coaches, for losing my starting position and not producing like I should be.

I didn’t realize until much later how much of an immature man I was being in blaming others for my circumstances instead of taking responsibility for where I was in my life. It was easy to point fingers at others and talk crap and blame everyone but myself for what was happening. It was a lot more difficult and scary to look inward and ask myself how I got into this situation and how I could make some changes and make it better.

When I got drafted, a lot of people were surprised, myself included, to be honest. I was never a highly-touted prospect and never really garnered much interest from professional scouts until much later in my high school career. So when I finally did get drafted, it increased my confidence 10 fold! It was an affirmation that I was the sh*t and I had the talent to get to the top, all I had to do was just show up and let my abilities do the rest.

Boy was I wrong.
Getting demoted and eventually getting released (aka fired) was a big, super-sized serving of Humble Pie for me.

Now, losing my starting position and getting released was bad, but it got worse.
Going from high school, as an 18-year old, straight into the atmosphere of professional baseball was a huge jump for me. I was still living at home, I never had a job and mom and dad provided everything we needed so long as we were good kids and went to school. Also, I missed out on some growth and learning by skipping a college experience to go straight into professional baseball.

What were the effects of this? When I retired from professional baseball at the age of 27, I still essentially felt like an 18-year old fresh out of high school. But now, without the comfort and routine of the life of a professional athlete, I felt like a high school graduate being thrust into the regular world and I had to figure some things out. Did baseball offer some great learning experiences and give me some tools to use outside the lines? Absolutely! From professionalism, to sportsmanship, to being part of team, to punctuality, to respect and so many others, baseball made me the man I am today.

But, when you’re stuck in that bubble, which is a bubble only a fraction of the people on Earth get to be in, you begin to believe that this is the way the world works and this is the only way to do things. You become so good at being a professional athlete and your identity gets so wrapped up in what you do, that you forget there is a gigantic world outside of that bubble that you’ve lost touch with and forgot is out there.

It isn’t all that dissimilar to a soldier being in the bubble of the military and battle and that brotherhood, camaraderie, and lifestyle, only to be thrust back into the non-military real world and having to acclimate to civilian life while searching for an identity as a non-soldier. At times feeling like there is nobody to turn to because you feel that nobody can relate to your former lifestyle.

When my bubble burst I felt like I was blinded by the light of the real world. I call it the real world because when you’re in that bubble of professional sports, you’re essentially living a dream. It isn’t until you come out of it that you realize “oh damn, this is what the world is really like.” Some people, but even more of a fraction of a fraction of a fraction, get to reach the pinnacle of their profession and get to leave the game on their terms and go on to live prosperous lives. That wasn’t the case for me.

When I left the game, I didn’t have millions of dollars or even a college degree to fall back on.
I had to make some big decisions and make them quickly.

I faced guys throwing 100 miles per hour, some of them without very good control of where the pitch was going because they were just trying to throw as hard as they could.
But, that was nowhere near as frightening as stepping into the real world as a retired (and, according to my ego, “failed”) athlete and having to find out who the hell I am, what the hell I’m good at and what I can offer to the world. This has been one of the ugliest phases of my life.

But, it is also THE MOST important phase of my life.

I wasn’t born to be a Major League Baseball Player, I was born to pursue and fail at it, battle through the agony of defeat, come out of the other side alive, and be an example to others of how they can do the same in their lives.

How do I know this? Because you’re human, just like me.

My best advice for anyone dealing with something similar to what I’ve been through?
Don’t let failure define you. Failure doesn’t define you, how you respond to it defines you.
Better yet, don’t let your job, career, salary, house, car or any possessions or anything outside of you define you.
If you do, like I did, and any of those things get lost or damaged, so will you, your self-esteem and your identity.
There is a you deep down inside that will always be there and will never change despite what may be going on outside of yourself.

I was a professional athlete for a decade of my life, but I’ve always been the same Christian Lopez for all of my life. I just somehow lost touch with that part of me.
I had to let go of who I thought I was supposed to be, to find out who I really am.

Try not to lose touch with that real you. If you do, do what you can to find you again.
Unlike a job, salary, status, and possessions, that real you will never leave you.

“Identity cannot be found or fabricated but emerges from within when one has the courage to let go.”
Doug Cooper

I am a former professional athlete currently in the process of becoming a firefighter, life coach and public speaker.
After my athletic career came to an end, I felt lost--not just my path but also my identity. I have been on a journey over the past year of figuring out who I really am and in the process inspiring others to do the same for themselves.
Becoming my best me to help you become your best you.