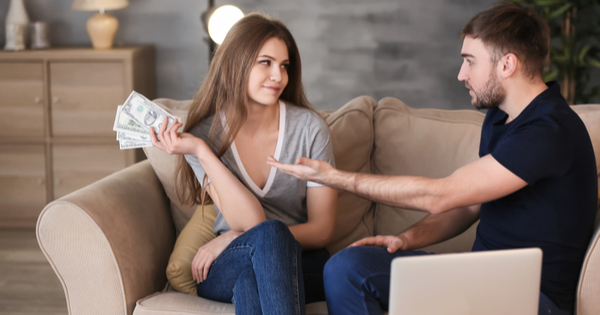 Money is a sensitive issue, especially in marriages. A poll by Slater and Gordon in 2018 revealed that money is the top reason couples decide to split up. More often than not, the problem is not the lack of money, but rather the lack of transparency and communication regarding financial matters.

The lack of transparency becomes worse when the wife has a higher income than the husband, to the point of blatantly lying about it. This shocking truth was revealed in a 2018 paper by the United States Census Bureau.

The bureau found that in a household where the woman is the dominant breadwinner, she would report that her income is 1.5 lower than it should be, while the husband would claim that his income is 2.9 higher than it really is.

This finding shows that people still feel uncomfortable when a wife makes more money than her husband. It also indicates that the idea of traditional masculinity where men are responsible as the breadwinner still strongly influences today’s society.

The problem is, the number of female breadwinners keeps increasing. In the 1980s, only a quarter of women provided for their families. Today, 38% of American women are not only working but they also outearn their husbands!

If you’re in a similar situation, don’t make the same mistake. Lack of honesty and communication can easily lead to the downfall of your marriage. Before it’s getting out of hand, learn how to handle this tricky situation.

How to Deal With Income Inequality in Marriage

1. Be Honest and Communicate

To avoid problems in the future, it’s important to set a clear set of rules regarding the financial matters of your marriage from the start. In order to do that, both you and your partner have to be honest and transparent with each other. Honesty is the basic foundation of which a strong and lasting marriage is built upon.

Put aside your ego and pride, because you and your spouse are partners for life. So, instead of competing, you need to work together to ensure the wellbeing of your children and family.

Having clear goals is important, especially in marriages. Without clear financial goals, you’ll be tempted to buy unnecessary things that could leave you in serious debt. The financial mess that comes with debt means that it’ll be much harder for you to save for your children and retirement plan.

For all the things that you do and own together, you need to share the cost evenly. For instance, split the bill 50-50 when paying for your monthly rent, groceries, utilities, or travel expenses. The same rule applies when saving for future expenses like paying for a house mortgage, car loan, pension, and your kids’ college tuition.

On the other hand, for the things that you do and own for your own pleasure like doing your hobby and buying something for your own use, pay with your own money and leave your partner out of it.

4. Set Clear Roles and a Schedule for Housework

When both the husband and wife are working, housework can be a little bit tiring. When the higher-paid spouse gets to do all the tiring housework as well, fights and arguments will be inevitable because she would feel like carrying the burden of the family. To avoid that, set a clear role and schedule to do housework that benefits each other equally.

Have a monthly meeting with your spouse to discuss your cash flow for that particular month. This way, you’ll be able to monitor whether you’re spending based on your financial goals, which cost you can cut down, the expense plan for the next month, as well as opportunities to gain side income.

A longlasting marriage isn’t about giving flowers every Valentine’s Day or going to a private island on every anniversary. The key is an honest relationship where both parties trust each other and work as a team to make the marriage works.

However, we never know where life will bring us. When your wife suddenly gets a promotion and a higher salary than you, things could go south pretty quickly if you’re not prepared. To deal with income inequality in a marriage, do the following tips and tricks: