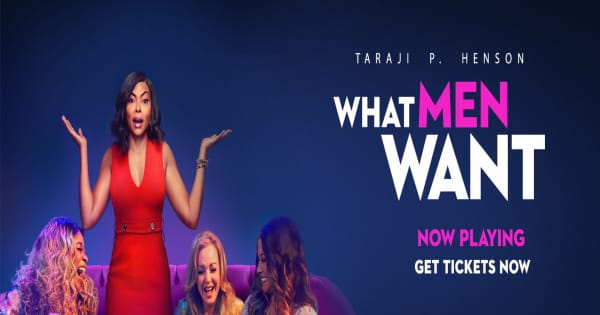 “What Men Want” has the same problem as its gender-flipped counterpart, “What Women Want,” in that neither of them really answer the question. I’m not completely sure they know what audiences want, either.

In this new version, same as the old version, Ali Davis (Taraji P. Henson) is boxed out by the male sports agents in her profession, but gains an unexpected edge over them when she develops the ability to hear men’s thoughts.

In 2000 the Nancy Meyers helmed “What Women Want” somehow cost $70 million (I assume a third of that was Mel Gibson’s salary) but made a whopping $374 million worldwide. Astonishingly enough, it’s taken almost twenty years for Paramount to figure out that gender-swapping the story is an easy way to remake one of their bigger hits from “the aughts.”

The problem with this film is that there isn’t a lot of nuance or strong character defining moments. Ali, who is a selfish and difficult person in the beginning of the film, only attempts to make herself better when either prodded by those closest to her or after she completely screws up every relationship around her. I wondered if the character actually learned anything or was just trying to do better to get her friends back.

Henson plays the first act of this film big. Theater big. It’s not until her character starts to feel challenged that she settles into the material a bit. There is a moment where the script touches on how strong and determined women are sometimes perceived as “mean and nasty” because of their toughness. I liked that idea and wish they would have explored it more. The problem with Ali Davis is that she is terrible to most of the people around her. There is a difference between a fierce, competitive focus and being abusive to those around you. I don’t know if the script knew the difference.

Another missed opportunity was for the filmmakers to really delve into the minds of the men around her. She works in a male-ruled career of sports management. Exploring an African American woman in a predominantly white male dominated company would have been an interesting subject to tackle, but they only dive into it with a few lines of dialogue.

From interviews with the cast and crew I know they attempted to not use men’s inner thoughts as a punching bag in support of the comedy. Unfortunately, with the exception of 2-3 characters, that’s pretty much what the script does. There could have been an interesting story here after the initial thoughts of food, sex, and sports men have to really dive into the self-doubt and stress most of these male characters probably have working in such a high stress environment. We could have really learned something about each character, no matter how vain or self assured their facade. There is a scene where a couple of male ad executives completely blow the opportunity to sign a first round NBA prospect because of a misguided sizzle reel they put together for the young man and his father (played by Tracy Morgan, who has about 15 minutes of screen time). How amazing would it have been to see that sports agent full of angst and self doubt in his office before Ali comes in to confront him and the comedy ensues. Racism and misogyny is usually bred from the low self worth and insecurities of those projecting it.  I guess that would be getting too deep for a comedy like this.

All is not lost. There are a few good laughs to be found and the supporting cast is good, with high marks for Josh Brener as Ali’s dedicated assistant Brandon and Erykah Badu, who completely steals the show as the wacky Sylvia Browne-type psychic/hair stylist  “Sister.” If they ever made a spin-off of “Sister,” I would be first in line.

“What Men Want” has a few good laughs and a solid cast but suffers from two-dimensional characters and a tendency to lean into a cheap joke instead of developing more nuanced material. Maybe in another 15 years that will be the idea behind “What People Want.”