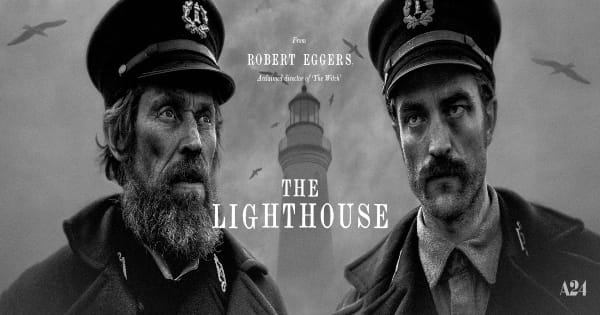 Some movies just feel like cinema. The look. The dialog. The feel of the environment. They all have a tangible quality that seeps out of its  pores. “The Lighthouse” is one of those films.

Robert Eggers’ film is about two lighthouse keepers trying to maintain their sanity while living on a remote and mysterious New England island in the 1890s. To say Mr. Eggers can set a mood would be an understatement. The entire movie excels in the area of atmosphere.

Shot on 35mm black and white film with vintage Baltar lenses from as early as 1918 to as late as 1938, this makes the movie’s aspect ratio approximately 1.19:1 (practically square), so don’t think there is anything wrong with your modern high-definition widescreen television. Jarin Blaschke’s cinematography conveys a sense of dread and claustrophobia. It’s no surprise he was nominated for “Best Cinematography” at this year’s Oscar’s.

What is a surprise is the lack of any additional nominations for this film, particularly Willem Dafoe (“The Last Temptation of Christ”), who continues to cement his reputation as one of our greatest living actors. How he didn’t get a nomination for “Best Supporting Actor” is anyone’s guess. I can only assume that since the role isn’t flashy and the movie is smaller (by Hollywood standards) it was brushed aside for other, more high profile performances. Personally, I would move either Tom Hanks (“A Beautiful Day In The Neighborhood”) or Brad Pitt (“Once Upon A Time…In Hollywood”) out of the way to make room for Dafoe, who gets completely lost in the role of Thomas Howard.

Kudos to Robert Pattinson (“Twilight”) as well. While he may not have made the nominated list either, he gives a very strong performance here. I certainly am completely confident in his ability to play Bruce Wayne/Batman in next years “The Batman.”

The story, co-written by Director Robert Eggers and his brother Max, is quiet with sparse dialog. When the characters speak it means something. When Dafoe delivers one of his monologues it’s a powerhouse moment.

The Blu-Ray version of the film includes the solid three-part featurette “The Lighthouse: A Dark & Stormy Tale,” a fascinating directors commentary where Eggers tries to explain this madness and two completely unnecessary deleted scenes. It was nice to see a little effort put into the supplemental material, especially as physical media (and with it disc supplements) is becoming an afterthought for studios. There is also a digital version included in the packaging.

“The Lighthouse” isn’t for everyone (some will flat out despise it), but for those that love their mise en scène slow burning, moody and demanding of the viewers patience and imagination, “The Lighthouse” is a winner in what was already a great year for film in 2019.

FacebookTweet1Pin2EmailShares3
wpDiscuz
Share this ArticleLike this article? Email it to a friend!
Email sent!