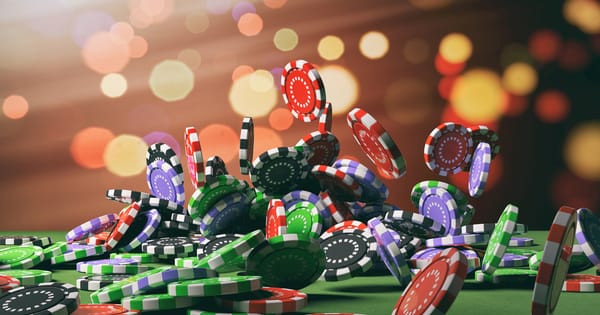 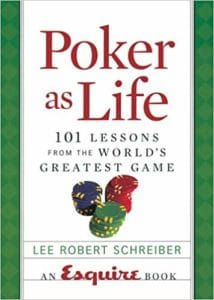 They don’t correctly count the number of religious people in the United States because, for some reason, they don’t consider poker a religion. But it is. College kids play for tuition money. Office workers play online. And if Texas Hold ‘Em were a church, it would be the fastest growing denomination in America.

I do not indulge in poker. I say that is because I gamble on myself all day long — no corporate office stocked with free supplies, no cushy health plan, no 401(k); it’s just my talent and me here — and I don’t want more of the same at night. But I only have to read a little about poker to know that’s just a line. The truth is, I fear that poker is not a game at all. It is a metaphor. For life. And if I turn out to be a loser at poker, what does that say about me?

Lee Robert Schreiber’s scary-smart book confirms my darkest fears. “Poker,” he tells us, “is primarily about psychology, in which the perceptive, intuitive and observant student of human nature will usually be materially rewarded at the end of a session (or a month of sessions), while the psychologically dense or unexamined will remain cash, and insight, poor.”

Trust this man. (Well, not at a card table…) He put himself through college playing cards, and I’d be willing to bet it wasn’t a community college. He has played at every level. He has read a book or three — he quote philosophers with the same flair as he cites poker gurus — and he can writing a charming sentence.

Which is not to say he has much desire to be your friend. This book has one theme, and it is tough love. That’s the right tone. You are going to play poker, money will be involved — you want someone to deliver reassurances of your personal goodness? If so, get a dog. If not, shut up and pay attention. [To buy the book from Amazon, click here.]

The Gospel According to Schreiber: Poker is “brutal and primal.” You must play “with rapacity and toughness.” You may play with friends, but “you have no allies.” You must ask yourself: “Can I gut an opponent without flinching?” Your first task: to love yourself (low self-esteem gets what it deserves). At the same time, though you be the manliest of men, “you must learn to think and feel like a woman.” (See, poker does improve a man’s character.) Can’t figure out who’s the worst player at the table? Then it’s you, babe. Luck? “There’s no such thing.” And for God’s sake, sit up straight — and stay that way. Slouching is a “tell,” and there’s almost nothing worse than a “tell.” (Cheating is worse. So is losing. And that’s about it.)

Along the way, Schreiber tosses in a salad of great quotes from poker players, film stars, historical figures and more. My favorite: “My friend, if the queen of spades is not under your hand, I owe you an apology.” The speaker: an anonymous 19th-century poker player who had pinned an opponent’s hand to the card table with a bowie knife.

And Schreiber offers up lovely factoids: the origin of the phrase “the buck stops here,” Richard Nixon’s prowess in cards during World War II, why some stocks are called blue chips.

And then there’s the weird stuff. Is your name Lenny? Please, don’t play cards for money. It’s your name — it dooms you. A Lenny “will bet on every hand like it’s nobody’s business; he will rarely fold, and, unsurprisingly, he will lose almost every time out. Why Lenny? It’s one of the great poker mysteries.”

“Poker as Life” is a small book, a pocket-sized hardcover that weighs in at 231 pages. Don’t be fooled by that, or by its modest price. This is a valuable book, and not just for poker buffs. As those who live by its precepts could surely tell you, this little tome is a decent guide to poker and an even better handbook of practical philosophy — how to get somewhere in a world in which, whether you like it or not, many of life’s winners approach each day as a new game.

I may not play poker, but I need to come to terms with the members of the Church of Poker. So let’s hear it for Brother Schreiber and his New Testament. I fought it for a while, but now I believe. Just don’t make me worship at a card table.