Get Daily Email
Join/Login CLOSE
Home / A&E / Her Son Asked Her to Bake Something for a School Sale. Instead, She Bought a Quiche. 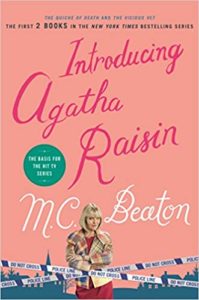 AGATHA RAISIN RIP: Marion Chesney, who wrote as M.C. Beaton, died recently, at 83. According to the New York Times obituary, she wrote 150 novels and had no plan to stop: “I will be working until I die, because I am old and I have contracts to honor.” She did not invent Agatha Raisin after agonizing thought. “My son’s housemaster was holding a sale for the Vietnamese boat people,” she said. “He asked me for ‘some of my splendid home baking.’ I didn’t want to let my son down by saying I couldn’t bake, so I bought a couple of quiche and put my own wrappings on them. That was the background to the plot of ‘The Quiche of Death.’”
—-
What are the odds that I would read, much less praise, an English murder mystery starring a retired public relations executive who sells her London business and moves to a cottage in the Cotswolds?

But I read something about M.C. Beaton. Or maybe one of you pushed her on me. Whatever — I bought a “Agatha Raisin and The Quiche of Death,” the first of her 23 Agatha Raisin mysteries, and, taking a wild chance, exposed my eyes to page one.

Mrs. Agatha Raisin sat behind her newly cleared desk in her office in South Molton Street in London’s Mayfair. From the outer office came the hum of voices and the clink of glasses as the staff prepared to say farewell to her.

For Agatha was taking early retirement. She had built up the public-relations firm over long hard years of work. She had come a long way from her working-class background in Birmingham. She had survived an unfortunate marriage and had come out of it, divorced and battered in spirit, but determined to succeed in life. All her business efforts were to one end, the realization of a dream — a cottage in the Cotswolds.

Well, isn’t that brisk! Not a wasted word. Indeed, Agatha’s back story — an entire chapter in the hands of a hack — has been compressed into a paragraph. Clearly, someone once wrote for a newspaper.

The Cotswolds in the Midlands are similarly dispensed: “surely one of the few man-made beauties in the world: quaint villages of golden stone houses, pretty gardens, winding green lanes and ancient churches.”

A middle-aged woman in a mystery named Agatha — you expect a jolly English biddy, don’t you? But how tart is this:

Agatha was aged fifty-three, with plain brown hair and a plain square face and a stocky figure. Her accent was as Mayfair as could be except in moments of distress or excitement, when the old nasal Birmingham voice of her youth crept through. It helps in public relations to have a certain amount of charm and Agatha had none. She got results by being a sort of one-woman soft-cop/hard-cop combination; alternately bullying and wheedling on behalf of her clients. Journalists often gave space to her clients just to get rid of her. She was also an expert at emotional blackmail and anyone unwise enough to accept a present or a free lunch from Agatha was pursued shamelessly until they paid back in kind.

She was popular with her staff because they were a rather weak, frivolous lot, the kind of people who build up legends about anyone of whom they are frightened. Agatha was described as “a real character,” and like all real characters who speak their mind, she did not have any real friends. Her work had been her social life as well.

I have encountered this woman. Several times. I would wager you too have made the acquaintance of someone like this.

Agatha’s arrival in the “friendly” Cotswolds village of Carsely is anything but. The locals –– stock characters, all — are as inviting as warm English beer in a heat wave.

What to do? Well, there’s a baking contest coming up. Agatha’s expertise in the domestic arts extends no further than the microwave, so she decides to buy a take-out quiche and enter the contest.

There’s poison in that quiche — yes, it’s a literal quiche of death. And someone dies. Agatha’s a suspect very briefly, just long enough for her to get interested in figuring out whodunnit. And we’re off. [To buy the paperback from Amazon, click here. For the Kindle edition, click here.]

“Agatha Raisin and The Quiche of Death” was such a pleasant surprise I wondered why I’d never heard of M.C. Beaton. This may be because she is, in daily life, Marion Chesney, author of more than 100 historical romance novels. Quite the interesting bio: born in Scotland, lucked into a newspaper job, became a theater critic, fashion editor and crime reporter. Moved to the United States with her husband and son. A run of bad luck, then a job on a Murdoch tabloid. Eager to spend more time with her child, she started writing romance novels. Soon she was living in the Cotswolds.

“Under the exterior of every effeminate man beats the heart of a real chauvinist pig,” Agatha thinks, rather late in the novel. Which is to say: country life has sweetened her personality not at all. Fine with me. Her neighbors are no prizes either. And they’re far less articulate and resourceful.

It can’t be. But it is so. I have a modest crush on Agatha Raisin. And real admiration for her creator.

Facebook82TweetPinEmailShares82
wpDiscuz
Share this ArticleLike this article? Email it to a friend!
Email sent!