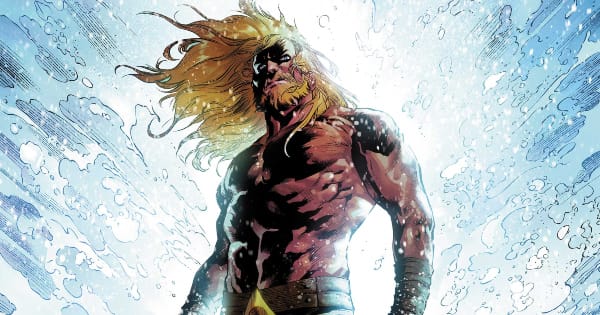 A hero has forgotten who they are in ‘Unspoken Water’

I was lucky to read my first Aquaman graphic novel a few months ago. In it the Justice League faced a very powerful threat. Somehow the ocean was changing people into hideous monsters. It was up to Aquaman to find out who was behind it as well as a way to stop them. He found a way to beat them, but this victory came with a cost. Now he has awoken in a strange land in ‘Unspoken Water’. I was able to read a digital copy of this graphic novel and here is what I thought of it.

You can read the plot for ‘Unspoken Water’ here:

He’s lost his kingdom. He’s lost his memory. He may even have lost his mind. He is Arthur Curry, the Lord of Atlantis, a founding member of the Justice League…and he has no idea where he is, how he got there…or how to escape.

The maritime monarch has washed up on the shore of a remote island where nothing is as it seems. In the mysterious town of Unspoken Water, the people fear the wrathful sea. Aquaman befriends an enigmatic young villager named Caille–but he dreams of a redheaded woman with whom he shares an unbreakable bond.

But even as his queen Mera attempts to locate the amnesiac Arthur, a new enemy is rising out of the depths…

I had a blast reading ‘Unspoken Water’. The story it told was an exciting one where this famous hero had lost his memory. While he tries to get by in this mysterious land, he makes friends with a local there. But slowly a deadly enemy is trying to return. It looks like he may be the only one able to stop it. Unexpected allies show up to help him defeat this enemy for good. If you are a fan of Aquaman then you will want to check this graphic novel out.

Aquaman Vol 1: Unspoken Water is available now. You can order this graphic novel on Amazon and at Barnes and Noble.