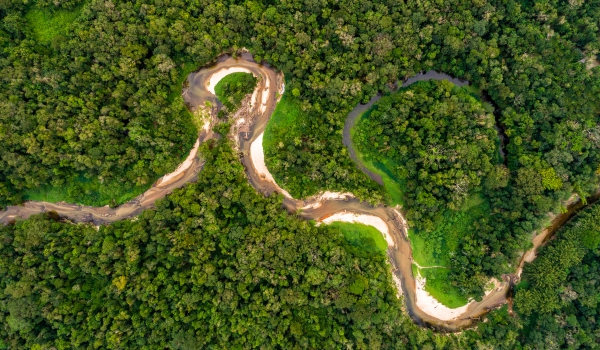 SAO PAULO – When I arrived in the Amazon in the 60s, there were no roads. The rivers were the highways, crowded with boats of all shapes and sizes. You travelled on what was available, be it a trading boat, stopping at riverside villages for fishermen to carry aboard giant pirarucu (one of the world’s largest freshwater fish, reaching up to two metres in length), or a precarious canoe powered by an outboard motor, getting soaked in sudden downpours. I slung my hammock in passenger boats and slept to the sound of the thump-thump-thump of the engines, or in cattle boats, kept awake by the restless shuffle of cows on the way to the slaughterhouse. Once I got a lift on a missionary boat which stopped at a lonely shack for a nervous young priest to give the last rites to a dying man. Occasionally we would be rocked in the wake of the big Booth Line steamers chugging their way a thousand miles upriver to Manaus after crossing the Atlantic from Liverpool. In the 70s the military, who had taken power, decided that the vast Amazon region must be “integrated” with the rest of the country, which had developed along the coast, to stop foreign powers occupying it to exploit its natural resources. They began building roads and moving in Brazilians from other regions to populate what they called an “empty” region, ignoring the existing population of indigenous peoples and descendants of the tappers who had migrated there during the turn of the century rubber boom.

Roads now link the Amazon region to the rest of the country, but ironically they have facilitated the penetration of foreign companies into every corner of the rainforest, as well as cattle ranchers, soy farmers, loggers and mineral companies from the more developed parts of Brazil. Almost 20% of the rainforest has been destroyed since the roads came. The Amazon basin is now China’s No.1 supplier of natural resources, replacing its Asian neighbours as their resources have become depleted. In a relatively short time, China has become Brazil’s major trading partner, overtaking the US and Europe. But China’s voracious demand for iron ore and timber, as well as soy and beef, is not only fuelling deforestation but negatively influencing Brazil’s environmental protection laws, in the view of researchers. In a 2012 paper entitled Amazonian forest loss and the long reach of China’s Influence¹, the authors found that “the rapid rise in exports of soy and beef products to China are two of the major drivers of Amazonian deforestation in Brazil”. The paper further argues that Chinese purchases of agricultural and forest land and Chinese imports of commodities such as timber and aluminium also cause environmental impacts in the Amazon. Chinese financing and investment in Amazonian infrastructure such as railways and mineral processing facilities have additional impacts. The authors say the “direct impact of commodity exports is only the tip of the iceberg of Chinese influence on Amazonia.” “Money earned from this trade is strengthening Brazilian agribusiness interests, with profound effects on domestic politics that are reflected in legislative and administrative changes, weakening environmental protection”. This refers to the recent successful attempt by the agribusiness lobby in the Brazilian Congress to weaken the existing Forest Code, which, although often flouted, has still played an important role in conserving rainforest, rivers and biodiversity. “Impacts can also be expected from Chinese financing under negotiation for infrastructure such as a railway linking the state of Mato Grosso to a port on the Amazon river”, the authors write.

“Mato Grosso, an Amazonian state twice the size of the US state of California, is a major focus of expansion of soy, cotton and intensified cattle production. Chinese purchases of land for agriculture and timber imply an increasing direct role in commodity production. “Other impacts come from exports from mining and from the processing of minerals, especially the demands for charcoal for pig-iron smelters and for electricity from hydroelectric dams for aluminium smelters”. They say Chinese demand for aluminium, an electricity-intensive industry, “contributes to Brazil’s push for a massive increase in building hydroelectric dams in Amazonia over the next decade.” “Brazil’s 2011–2020 ten-year energy-expansion plan (Ministry of Mines and Energy, 2011) calls for 30 large dams to be built in the Legal Amazon [the greater Amazon basin] by 2020, a rate of one dam every four months. “The Chinese-Brazilian alumina plant will be an important beneficiary of the Belo Monte dam, now under construction on the Xingu River, with transmission lines planned to connect Barcarena (where the plant is located) directly to the dam near Altamira, Para.” Belo Monte has environmental and social impacts that extend far beyond the areas that will be directly flooded, and the dam is likely to justify much larger upstream reservoirs to regulate the river’s flow, according to an earlier study by Fearnside in 2006. He also concluded from other studies that “the dam has functioned as a ‘spearhead’ in creating precedents that weaken Brazil’s environmental licensing system and prepare the way for the many dams proposed under the energy-expansion plan” and that “the influence of both Brazil and China in expanding carbon credit for hydroelectric projects under the Kyoto Protocol’s Clean Development Mechanism has further increased the profitability of dams”. “It should therefore not come as a surprise that China exerts multiple influences on events in Brazil, often to the detriment of the Amazon forest”, concludes the 2012 paper.

Exploit a cow, save a tree

It notes that Brazil’s boom in agricultural commodities, which earned US$85 billion in 2011, has contributed hugely to the country’s recent economic growth and has reduced its vulnerability to external economic crises. Meanwhile a recent study produced by Imazon (Amazon Institute of People and The Environment), a well-respected research institute based in Belem, has shown that deforestation could be drastically reduced by increasing productivity. Traditionally, Amazon cattle farmers have never bothered about productivity, because it has been so easy just to clear more forest. The Imazon study shows that future projected demand could be entirely met without the need to cut down a single tree, if productivity was increased from the present average of 80 kilos of beef per hectare to 300 kilos. To help farmers learn the new techniques, Imazon suggests that an annual investment of about US$500 million would be enough to pay for technical assistance, reference centres for each region, and model farms to demonstrate good practice. Credit could then be linked to performance. Imazon points out that if nothing is done to increase productivity a further area of almost 13 million hectares will be cleared to meet demand, leading to an annual deforestation rate three to four times greater than the Government’s target of no more than 380,000 hectares a year until 2020. Traditionally the Government has relied on applying hefty fines for illegal clearing. This has two big disadvantages: the deforestation is detected only when it has already happened, and because of Brazil`s complex and lengthy judicial process, the fines are almost never paid. In addition, the powerful farmers` lobby in Congress is adept at voting through “amnesties” at regular intervals to pardon unpaid fines. Now a more intelligent way to inhibit deforestation has been found, this time by the Central Bank. A bank resolution, passed in 2008, compels farmers to prove they are in compliance with environmental laws before they can obtain credit from any official bank. A study by the Nucleus for the Evaluation of Climate Policies of Rio de Janeiro’s Catholic University, PUC, found that, as a result, between 2008 and 2011 a total of 2,700 sq kms was saved from deforestation, because the farmers, deprived of capital, lacked the funding to extend their activities. The study found the correlation between credit and deforestation was stronger in cattle raising. The Government recently celebrated new statistics showing a reduction in deforestation, but as these various studies show, there are many variables involved. If China maintains or increases its demand for the natural resources of the Amazon and for the commodities produced in surrounding areas, the threat to the rainforest will continue. – Climate News Network