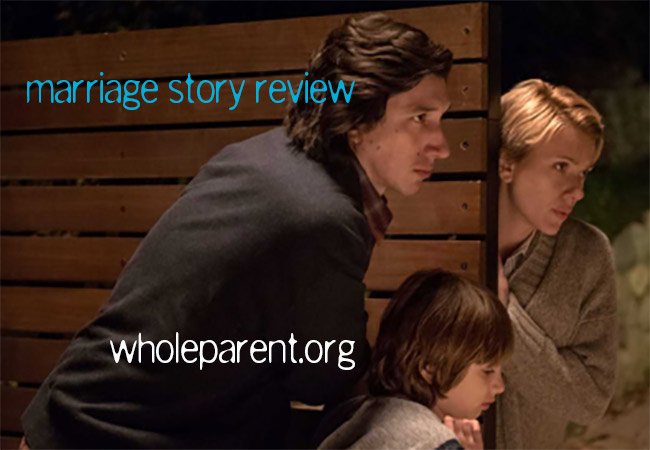 The title of Bitch Media’s review of Marriage Story is meant to cause a reaction. And, I’ll admit, I was ready to jump in and find all that was wrong with the “bitching” argument, but I couldn’t find the “Misogyny” or the #metoo angle the article appeared to be dangling in front of its readers.

What’s The Message of Marriage Story?

I watched Marriage Story after my mom kept telling me what a great movie it was. She was convinced it was “all the lawyers” that messed it all up. And to a point, she’s right. It seems, at the beginning of the movie that our two fractured parents are interested in a fair divorce, a divorce that does not hurt the other parent, and a divorce that would be “in the best interest” of their young son. That’s not how the narrative goes.

As the divorcing parents navigate the process of divorce, the business of splitting their baby, so to speak, the mom moves “home” to Los Angeles to star in a TV pilot. Dad is forced to respond to her Californian divorce attorney, played to wicked effect by Laura Dern (fresh off her Big Little Lies role), and the aggressive divorce case she builds with the mom, played by Scarlett Johanssen. She wants to go for blood. And at first, the mom is hesitant, but she continues to weave a dark divorce narrative, in some empowering ideas, that any moms watching the film are going to respond to. But the lawyer’s case, and Bitch Media’s case, does not make dad, played by Adam Driver, a misogynist, any more than it makes the divorce attorney into a feminist.

Yes, dad is hoping to keep things civil. And yes, mom has made some sacrifices to support her husband’s career and give more of her energy into becoming a mom. Is this a misogynistic problem? Or is this a fact that hetero couples (and other gender combo couples) have to deal with? Sometimes, mom or dad will “sacrifice” their career for the family good. It’s not always the men who are the breadwinners. Tides have changed and there are plenty of stay-at-home dads in the mix, who we must assume will be asking for child support if divorce becomes part of their future.

Dad’s success does not diminish the commitment he made to support his family and his wife and leading actress. And in the beginning, the dad, hires a nice attorney who has empathy and a gentler approach to working it out. Mom’s attorney is “going for a 55/45 custody split, just so the dad “can’t say he got 50/50.” She’s going for the win. She is not all that concerned about the dad’s welfare or the welfare of the child.

Everyone Has a Difficult Road in Divorce

Let’s see where Bitch Media gets misogyny ideas about this movie. Here’s an early quote in the review.

Nicole left Los Angeles and her career as an actress to follow Charlie to New York and support his career as a theater actor–turned director and playwright. At the time, Nicole was enthusiastic about the move, but as time went on and their lives increasingly revolved around his career, she began noticing how unfulfilled she felt.

Okay, this is accurate. AND, the mom “noticing how unfulfilled she felt” is actually a big part of the problem. Her feelings of fulfillment are what lead her back to Los Angeles, to establish herself as a film actress as opposed to an actress in a local New York theater company. Mom’s fulfillment is not dad’s problem. Mom’s fulfillment is mom’s problem. And if she’s been too wrapped up in being mom, or in being dad’s lead actress to work on her own fulfillment, then perhaps Marriage Story is a coming of age picture, rather than a divorce picture.

Let’s get deeper into Bitch’s pitch.

Nicole’s account of losing herself in marriage affirms a gendered power imbalance that’s all too common in many heterosexual relationships. Gender inequality and ownership has always been the bedrock of marriage in the United States, but the specific notion of the “male genius” wielding unexamined, unchecked power against women has become a timely feature in the #MeToo era.

Okay, there it is. Clearly, some well-constructed language to articulate a concept about power and control being in the hands of men in “many heterosexual relationships.” And the “timely feature” is the gender inequality and unchecked power, as exemplified in the #metoo movement. Yes, but…

I’m going to stop right there before I wade out into the dangerous #metoo waters.

Mom goes for the bulldog lawyer. The lawyer convinces her to “go for it.” And hilarity ensues. Actually, sadness and unnecessary drama is what ensues. If the divorcing parents had stuck to their original compassionate approach to collaborative divorce and organizing the discussion around the loving care of their son, things would’ve worked out differently for everyone involved. If mom had not gone for the jugular, the divorce part of the story would not have been so “dramatic,” and it would not have been much of a movie.

In most states, women gain custodial parenting rights over 80% of the time. Family courts start with the mom getting 70% of the kid time and some form of child support. This is how we start in the US. The men, in divorce, are often the ones take to the cleaners by lawyers exemplified in this movie. It takes a war. In the movie, dad has to hire an expensive bulldog lawyer to counteract mom’s aggressive approach. And we end with a legal fight for the custody of their kid and where he will live.

As a dad with non-custodial parenting rights, like the dad in this movie, I probably have a chip on my shoulder against the mean divorce attorney tactics. But dad gets 55/45 custody in this movie. Only when he’s in Los Angeles. For a while, the mom really does WIN. Dad flies into town when he can, when his work allows. Otherwise, the mom gets the kid full-time.

The movie ends in a masterstroke, as dad informs mom that he’s taken a residency for two years in Los Angeles. What this means is, mom is about to get her divorce split of the time with her kid. You can see the “oh shit” look in her eyes as she realizes she’s about to lose 45% of her kid-time when dad moves. Up until he moves, she was still getting 100% custody, except when dad was able to fly in to town for a visit. This is all-too-common in divorce today. Dads may have to move for a higher paying job, to pay for the child support and a 2nd home.

It’s not that Marriage Story is completely disinterested in the gender dynamics at play in heterosexual relationships, and the way they reverberate in society at large. But its brief moments of commentary don’t translate to a greater message about misogyny.

Yes, they are correct. The movie doesn’t have “a greater message about misogyny” because societal power dynamics and misogynistic marriage relationships is not what this movie is about. There is no #metoo moment in Marriage Story. There are a few moments of self-revelation and a few pointed arguments, but it’s really a movie about two parents getting divorced and one parent pulls the bitch move and moves to LA with the kid and hires a bitch attorney who advises her to go for her pound of flesh. It seems like the poetic moment, that has been argued on all sides is when the dad tells the angry mom, “You don’t want a voice. You just want to fucking complain about not having a voice.”

It is an accurate stab and a cutting blow. Mom is pissed. Mom isn’t feeling fulfilled in her life. Mom goes for an attorney who will encourage and “give voice” to her rage at the man she loved, the father of her child.

It is possible to have an amicable divorce when kids are involved. I tried. The parents in Marriage Story tried. And when the mom is unable to read the things she loves about her husband, we see her hot flash of realization as she leaves the mediation without engaging in the process. She’s raging at the dad for his transgression, he’s had an affair, but she’s really raging about her own self-denial that led her to feel unfulfilled. That’s really not the dad’s problem. That’s an existential problem that only the mom can solve for her self. And perhaps she is envigorated by he new TV role and her new bitch lawyer. And she’s a bit self-righteous about the case being tried in LA so the dad is forced to leave his home and his work every time he engages in the divorce, and any time he wants to see his child.

My ex-wife and I professed our desire to have an amicable and cooperative divorce. At some point between negotiations and getting her attorney to write up the decree, she changed the plan. It’s what the mom did in Marriage Story, it’s what a lot of moms do in a divorce, and at the moment (contrary to the Bitch Media position) in hetero divorces, dads are required to prove why they deserve to be an equal parent.

When my ex-wife wove a story of her superior parenting, her emotional maturity, and her being the better parent, she was telling herself a lie. She knew we were equally committed from the moment we discussed having kids, over 20 years ago. She’s got to keep telling herself that lie, to justify the way she treated me, the way she negated our parenting vows. And if that makes her furious as me, still… Well, that’s unfortunate for her. But, it’s more unfortunate for our two children.

The Bitch Media Review:
“Marriage Story” Doesn’t Reckon with the Misogyny of Its Male Protagonist

Facebook23Tweet5Pin1EmailShares29
wpDiscuz
Share this ArticleLike this article? Email it to a friend!
Email sent!