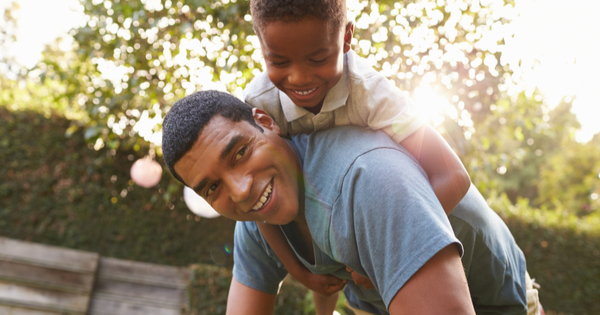 Fathers are in a strange time as we enter the middle of 2019. If you are looking for him, you might find him within Father Knows Best, Everybody Loves Raymond, Good Times, Home Improvement, or maybe even Gunsmoke or The Sopranos. As symbols, we knew where we stood a few decades ago: Concocting a master plan to intimidate the new boy in your daughter’s life, playing catch with our sons and teaching them how to change a tire. Helping them to understand to respect their wives, as they are the mothers of our children.

It should be that simple, right? The issue with this is that the narrative of what fatherhood, and to a larger extent manhood, has changed. We are in a collective era of being more involved and of being more cognizant of what we are modeling for our children. We are in a time where transgender rights and #MeToo are conversations that happen daily. These conversations are important and have shown how far we have come in the human experience while showing how far we desperately still need to go. The conversation should not stop with what is happening in the socio-cultural landscape. It should also address how fathers can learn and grow with the environment to be better parents and men.

The narrative of what a father is has been molded into something that never fit me as a father or man. I constantly think of Don Draper from Mad Men when I think of what a father was in the 1960s. There was a scene in the early episodes of the show that has Don (played by Jon Hamm) building a dollhouse for his daughter while he is drinking beer (he even asks Sally to get him one) smoking a cigarette and working with a little red toolbox. His wife and a neighbor look at Don with pure adoration and say, “That man.” This idea is something that I think many of us can agree with as the status of what a father was: working with their hands with a toolbox to the right and cold beer in the left. If this is how you still identify a father, then more power to you. But, this never fit my mold and I think that I can safely say that it won’t fit the mold for many other fathers going into the 2020s.

So, what is the mold of a modern dad? What is the blueprint that needs to be followed? The question has been on my mind lately as my children grow older and are more aware of what my role is in their lives. The nature of a father needs to be addressed today in light of the realization that what was once something commonplace is not the new normal. Male toxicity immediately comes to mind as one component of fatherhood that needs to be surgically removed and tossed in with the idea that I need to know how to fix a car. Fathers are being tasked more than ever to define where they stand on feminism, on gender roles, and on politics.

The shape of a family is no longer a single race, one man, one woman, one boy, and one girl, but rather all different combinations.

Today’s dad should have more of a role in the home and the emotional makeup of the children they raise. They should be able and willing to wear any hat that is required of them. They need to be aware of the stigmas that come with the father figures of the past and are willing to move forward. A modern father is more aware of the fact that they are not what they used to see on T.V. and their actions have a profound impact on their children. The modern father knows that they are not just there to go to work and come home; they are there to make a difference. The modern father knows that it is not the “suck it up” era and that it is ok to express emotions. The modern father is expected to believe in the division of labor in the home and that being at home is not the same as being present.

Whether he believes it or not, our society has a script that is clearly under construction. How our dads show up at home, work and play is being highlighted in current research and focuses us to examine his reality and our expectations. Having said all that, men have every right to express what matters to them as men and husbands of value, morals, integrity, and self-worth.

Fathers Incorporated (FI) realizes this more than any other organization in the country and is willing to start the conversation moving forward. FI is committed to understanding how modern fathers must be viewed, engaged, inspired, strengthened and advanced. In working with fathers, FI has been able to lead initiatives and programs that have evolved the understanding of what a dad is for the last 15 years. Now we want to take the experience, data and leadership to give today’s fathers the tools and resources to create positive change in their children. FI believes that the symbol of dad is more than it was and has more room to grow.

The narrative is changing in the world of fatherhood and what it means to be a dad today. The molds that we had are no longer fitting the symbols we need to become as fathers. Now is the time to make a new mold and to reimagine what a father can and should be. Fathers Incorporated is constructing the blueprint to the modern father and doing the work necessary to raise the standard of fatherhood worldwide.

What’s your take on what you just read? Comment below or write a response and submit to us your own point of view through out submissions portal here.