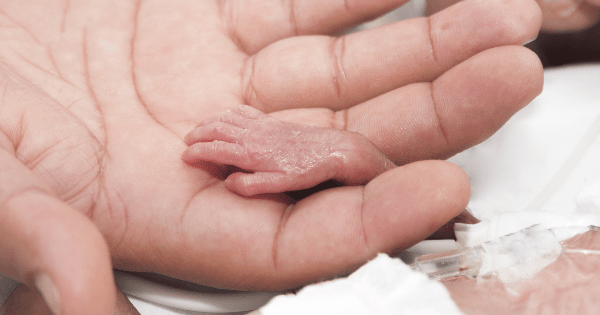 A cyborg baby. That’s what our son Ethan looked like when they had finally finished hooking him up to all manner of equipment and monitors. Wires and tubes connected to almost every part of his body, even an IV attached to the top of his head.

“It is not even clear from the X-rays how much of an esophagus he has,” was all I remembered the surgeon saying. What an opening line. I didn’t take anything in after that.

“I wish your mom was here,” I blurted out, oddly expecting sympathy from Ethan, barely 16 hours old.

A young woman interrupted my fretting to conduct an electrocardiogram. “We have to check for other organ defects before surgery,” she said.

I shivered watching her spread petroleum jelly over Ethan’s chest, and was relieved when she began moving what looked like a barcode reader from a grocery store across the gooey surface, thinking it might generate some heat. As she moved the instrument, images appeared on a monitor while a sheet with squiggly lines streamed out the other end. The screen displayed his heart and vascular systems from different angles, along with blood flow and heart movements. Each heartbeat produced multicolored explosions in rapid succession.

While I watched this extraordinary home movie of Ethan’s heart, he held my pinky finger with his only free hand. I stroked the back of his neck with my other hand and prattled on aimlessly about an essay I was writing on the German concept of rights.

After 20 minutes or so, I left for a quick bathroom break. I didn’t get far before a nurse ran up behind me, calling out, “The doctor needs you to come back right away.”

I rushed back to Ethan’s bedside. “Whatever you were doing before,” the doctor said, “do it again please. We can’t continue the test when he is so agitated.”

Ethan was fit to be tied. His back was arched and his arms and legs waved wildly, his face beet red as he tried to cry. He had the oddest silent cry that first day. Opening his mouth and tilting his head back like he was preparing to roar, he could only produce a very hoarse, rather hollow-sounding squeak. The fact that his lungs were filling up with stomach acid no doubt had a lot to do with it.

Resuming my monologue, I stroked his neck, and he wrapped his wee hand around my finger, suddenly becoming very calm. When he was lying flat, his complexion returned to normal, and he stopped crying.

There was a tap on my shoulder. A nurse needed to get something from under Ethan’s crib. I moved around to the head of the bed and pressed myself flush against the metal railing to make room for another nurse with a med cart to pass, straining so that I would not pull my finger from his little hand.

The neonatal intensive care unit was being remodeled, so it was unusually cramped and noisy. In addition to the usual bells and whistles of high-tech medical equipment, there were banging and drilling sounds produced by workmen busy behind thick plastic screens. Earlier I had been fully aware of the buzz of activity all around me, much like an animal in the wild, watchful for predators; now my attention was completely on that little red face, so much so that I was startled when the doctor thanked me for calming him down. Huh? I thought to myself as I glanced at her before returning my gaze to Ethan. You mean I did that? Looking around at the purposeful movement throughout the room, I felt like I was watching it through a soundproof glass enclosure; none of the commotion penetrated the little cocoon I shared with Ethan. Tears welled up in my eyes. By taking my finger in his itty-bitty hand, I felt like he was asking me to take care of him.

The moment passed, the feeling of calm swept away by all too familiar waves of nervous energy. You should reconsider, little guy. Just glance at my HR file: Anxious, moody, short-tempered, hyperactive, self-involved; seeks limelight while shirking responsibility; performs well at social gatherings.

A nurse gently touched my forearm to get my attention, then told me that the surgical team had arrived. I nodded and looked down at Ethan, perhaps for the last time.

“I won’t disappoint you,” I whispered, full of self-doubt.

Jeffrey Seitzer teaches at Roosevelt University in Chicago. Author, editor, and translator of several books and many articles on law and philosophy, his essays have appeared recently in Brevity Nonfiction Blog, Hippocampus, The Write Launch, Pulse Magazine, and elsewhere. He is currently completing a memoir about his time as a stay-at-home parent. You can follow him on Twitter @urbancornhusker and Facebook @cornhuskerinexile as well as learn more about his life and work at www jeffreyseitzer.com.

FacebookTweetPinEmailShares223
wpDiscuz
0
0
Would love your thoughts, please comment.x
()
x
| Reply
Share this ArticleLike this article? Email it to a friend!
Email sent!