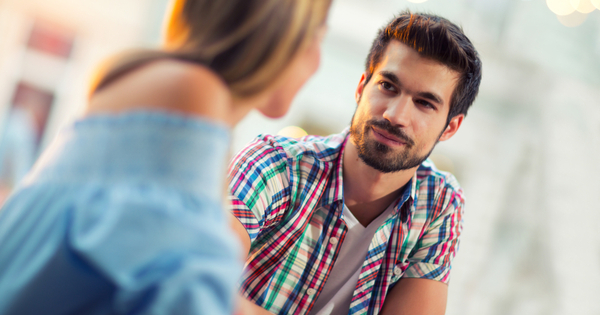 Love is a sticky messy thing. There are several different kinds of love, and to confuse things on top of all that, people love in their own weird ways.

I went through a stage in my life at one point where I would become really obsessed with women. If you asked me back then if I was in love, I would have told you that yes, absolutely. But experts tell us that obsessional love isn’t healthy — wouldn’t it be awesome if we could all wave our magical wands and become healthy? In an ideal world.

All of us can only love in the way that we know how, in the ways that life and experience have taught us. It’s how we get by.

So, I’ve compiled a little list of “general” ways in which men fall in love with women. Mainly through my own experience of course, and from what I’ve observed through others. Don’t listen to what he tells you, listen to what he “does.” Actions speak far louder than words, we can tell you a truckload of rubbish, but we certainly can’t hide what we do. That’s for sure.

By god is he present. Some guys will even be in your face present to the point that you can’t breathe (not good). But if you’re wondering whether he’s in deep, it is a sure sign–even if he’s the most introverted and distant person the world can meet, he’s present.

How present are they in your life? Are they with you daily? Drops you a DM over messenger daily? Men that call in on you in some form daily are generally thinking about you.

The way he looks at you

He will always be pleased to see you. I’ve been married to my wife for 12 years now, and I’m always the first person to wake up in the morning. When she wakes up I always greet her with a smile because I’m always pleased to see her. This is twelve years later mind you, and yet I’m still happy to see her. You’ll spot this after a while. It’s not the excitement, or the spark some people talk about — it’s actually a big wide grin and the lighting up of eyes. You’ll know after a while.

See, after the excitement fades, and the butterflies go that’s when the hard work begins. And if he’s still giving you wide happy eye-smiles, then you’re good to go.

He’s interested in your life and makes it a priority

So, he’ll not just ask you about your day but he’ll find that book on the renaissance era you’ve been looking for, for ages because you were studying it at a night class you were taking. He’ll pay particular attention to you.

There’s a difference between asking you about how your day has been and say taking on board what you say. Of course, most men (and women) don’t know about active listening and reading between the lines so no-one picks up subtle clues. But he’ll definitely think about that of which you’ve been actively talking about.

He’ll also support you in everything that you do. Your goals are now his goals too. Want to be a CEO? Great, I’m sure he’ll be right there behind you in that journey.

My wife always wanted to be a mother and have a family. Now that she has that she quit work and concentrates on building up the foundation of Alex, I totally support that dream. And there’s something really awesome about having my dinner on the boil when I get finished with work.

And most importantly you aren’t second-guessing him

When love is involved there are no childish games or worrying about anything. He’s just completely into you.

I mean it’s not all roses and fluff, even my wife and I have our spats and arguments, but even when it’s inconvenient for him you’ll know he has your back.

And lastly, he has your back

Honestly? Does he big you up when you aren’t there? If he catches his friends talking trash about you does he correct them? Does he re-evaluate his friendship with people that always talk bad about you?

Most men get very defensive when those we love are threatened. You will feel the tension in the room. So, you’ll have seen him defending you in some way most definitely.