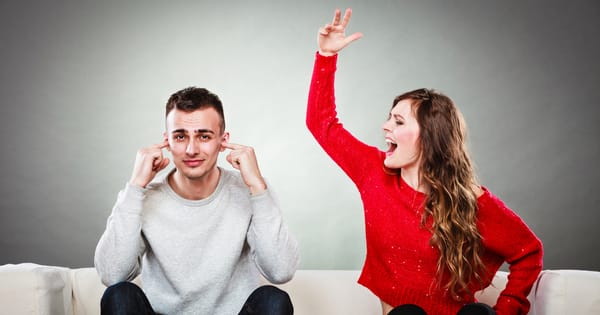 So, you are dating a guy, and it’s the crucial first few weeks. You met him, you exchanged phone numbers, you’ve made it through the first date, and are now officially dating. You really like this guy, and you are wondering what you can do (or avoid doing) to keep this relationship going and not scare him away.

The truth is there are certain things that women can do that will scare men away every single time. I have been coaching men for more than a decade, and they all agree that a woman who does ANY of the six things I describe below will scare a man away.

If you do any of these six things during the first month you are dating someone and you pressure him in any way, he is going to run for the hills. Don’t sabotage a potentially great relationship that could have gone somewhere by scaring a man off right at the beginning.

So here are 6 dating behaviors guaranteed to scare men off that all women should avoid so they will never again sabotage a potentially fantastic relationship:

So don’t talk negatively about your ex in any way, because what happens is the man you’re currently dating will hear you speak this way about your ex and all he will picture is himself in your ex’s place one day. He is going to think that if he ever becomes your ex that you are going to harbor that same kind of anger toward him and trash talk him to other men.

So, when a man asks you about your ex, the only thing you should say is “We are no longer together. It was a great relationship while it lasted, and I learned a lot.” That’s it. Plus, the fact that you are still trashing your ex is a sign that you are not ready to move forward with another relationship anyway.

2. Paranoia Runs Rampant. Here you are dating a man you really like and the first couple weeks are cruising along really well. Then, all of a sudden, he has a boys’ night out scheduled with some guys from his office. So, what do you do? First, you send him a text before he goes out that says “Have a great time tonight!” At this point, you are the cool woman you want to be.

Then, as the night progresses, the girlfriends you’re hanging out with start putting seeds of doubt in your mind about what he’s doing and you start to think “Is he cheating on me? Is he flirting with other women? What is he doing? Where is he right now?”

Then you make one of the top mistakes women make – you lob in another text to him asking him “What’s going on? What are you doing right now?” He will say “Having fun with my friends.”

Then you make a major blunder – you start to continuously text him throughout the course of the rest of the evening checking up on him. The “checking up” will not be to see whether the guy is having fun, but driven by paranoia that the guy is doing something other than just having fun with his friends.

This kind of paranoia will drive a man away about as quickly as anything. So when you are dating a man and he is out with his friends, respect his “guy time” — it will make you the cool woman he’s always wanted to find.

What you are doing when you make comments like this to a guy you’re dating is telling him that you are not confident in the way you look. It tells him that you don’t love who you are and haven’t embraced your own body.

You are planting a seed of doubt in him, causing him to wonder if he should date someone else who is more confident. Don’t trash talk other women. It doesn’t make you look cool – it makes you look really insecure.

4. Fishing For Compliments. Stop fishing for compliments. This is something that can drive a man crazy. Here is a typical scenario: The guy you’re dating looks at you and says “You really look beautiful tonight!” Ten minutes later you look at him and ask “How do I look tonight?” Another typical scenario is where you will tell a guy that you really like him a lot, to which he will respond by smiling and giving you a nice little hug and kiss. Ten minutes later you ask him “Well, do you like me too?”

A lot of women will constantly do things like this. A lot of women will be in a relationship feeling like they express their feelings while the guy they’re dating doesn’t express his. Stop fishing for compliments. Real compliments come from the heart. Allow us to compliment you when we feel it. If we don’t feel it at the exact moment you have expressed a feeling to us, just accept it and be okay with that.

If there are things he likes to do that simply don’t interest you, though, be cool with it. For example, if you don’t like to jet ski and he does, then just hang out on the beach and relax while he’s doing that. You don’t have to be joined at the hip.

If you are going to a cocktail party together, you don’t have to be on top of him at every moment. If you see him speaking with some woman at the party, do not immediately run over and start grabbing his hand and giving him a big hug. Certainly, don’t do this all night long. You are being clingy and possessive when you do this. When you are clingy, we are going to want to get rid of you very quickly. We don’t like clingy and possessive, so you need to avoid this behavior.

6. Pushing Friends On Him. The last behavior to avoid is pushing friends on us too soon. Women will be hanging out with a guy on the first or second date and say to him “Oh my God, you HAVE to meet my friends Jenna and Amy. You also have to meet my friends Phil and Anne, they’re such a great couple and you’ll love them!” A man hears this and thinks “I don’t even know you yet – can I get to know you for a month or two before I have to go meet all of your friends and be put on display as ‘the boyfriend?!’”

During the first few weeks we’re dating you, though, we don’t want to be taken to parties where we are led by the hand and paraded around like the instant boyfriend. It’s too much pressure. Allow yourselves to get to know each other first.

Facebook272TweetPin1EmailShares273
wpDiscuz
Share this ArticleLike this article? Email it to a friend!
Email sent!