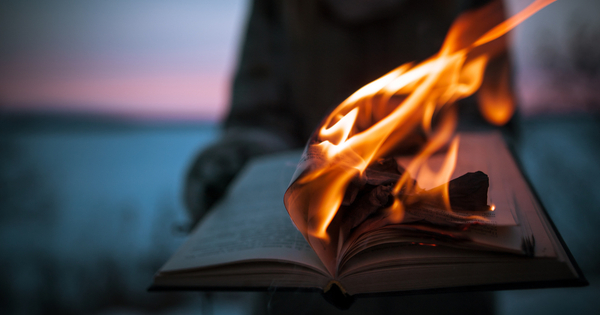 The one time I seriously considered burning a book was, naturally enough, when I was in college. I was a sophomore still in the process of shifting from one major to the next—I would have five in all—when I took a class in American politics. There were all sorts of texts that might have outraged me—treatises on Marxism on the one hand or paeans to unrestrained US capitalism on the other. But the one book that got so far under my skin that I seriously considered lighting a match and setting the whole thing ablaze was an abstruse cultural critique by an obscure intellectual that has managed to leave a mark on my mind ever since.

The book was The Culture of Narcissism by Christopher Lasch. Written during the height of the Me Decade of the 1970s, the text was a ferocious takedown of the increasingly self-absorbed, emotionally detached worldview that was taking over American life. Seen from the vantage point of an era with Donald Trump’s twitter feed, it almost makes me nostalgic to think of a time when a writer could lament mind-altering drugs, pre-marital sex and the rise of televised sporting spectacles as the end of civilization.

But at the age of 18, I was bothered so deeply by The Culture of Narcissism that I seriously felt that I would never be safe just knowing that a paperback copy of the book existed in my dormitory. The very existence of its arguments haunted my already substantial sense of self-doubt. As long as both it and I were both in the same space-time continuum, I would never have peace of mind.

The book gave off an unrelenting sense of gloom, a pessimism about our society that extended from the family to the workplace, from the therapist’s office to the football field. I was not yet familiar with this kind of cultural criticism and had no framework for interpreting its dystopian prophecy. I had no idea that there was an entire chorus of writers—some Marxist, some post-modern—who had written jeremiads that not only denounced the society I was about to enter but insisted that we needed to change it with a gut-wrenching—and possibly violent—social revolution. It was as though I were watching a horror movie for the first time and thought it was a documentary.

At the center of Lasch’s critique of American society was his conviction that the middle class—which I was hoping to join—had become a collection of clinical narcissists, empty souls so consumed with their own rage, their utter impotence at the dawning of a new corporate age that they were stricken with anxiety, stumbling along in the uncertainties of a new world that had no use for the old authorities of religion, politics or family.

There was nothing else for contemporary Americans to do but console themselves with convenient lies, easy sex, excessive drinking and televised spectacles.  According to Lasch, we were a collection of individuals who were outwardly confident and successful but inwardly stricken by doubt and despair. It was a society of the damned, each stricken soul hell-bent on insisting that they were one meditation class away from heaven.

I can’t say that I was precisely the kind of narcissist Lasch described but I was indeed desperate for reassurances from family, friends and professors that I was worthwhile, possibly even special. What’s more, I was seeking help from the same therapeutic profession that Lasch had disparaged, seeking the kind of fleeting self-acceptance that he condemned as a pathetic substitute for religious salvation. I also took vicarious pleasure from the sporting events he derided as destructive spectacles and I desperately wanted to participate in the kind of casual sex that he critiqued as a symptom of an empty atomized society.

In short, The Culture of Narcissism both punctured my illusions and deprived me of my consolations. It left me naked in a world I was already terrified of, a world I suspected had no place for me. The book that sat on my shelf night after night, its mere presence in my room a ceaseless reminder of all I had to fear outside the dormitory, if not the walls of my room itself.

It has become almost a cliché to say that young men and women go to college to have their most cherished ideas challenged. While those challenges may well be the effect of a good liberal education, I can say that at least in my case, the experience was not something I sought or desired. Don’t get me wrong: I wanted to learn. I wanted to delve into great books and explore wisdom from both the past and the present, East as well as West. I just did not expect that wisdom to be in any way jarring or disorienting. I wanted to add knowledge without necessarily being affected by it.

I decided that the only thing to do was destroy the source of my anxiety, to set the book on fire until my unease had dissipated into ashes. I would hold a small private ceremony to watch the words dissolve in the flames. Once I had demonstrated my power over those mere pieces of paper, I would pour cold water on the dust that remained and be done with it.

The idea hovered in my mind—more as a playful possibility than a concrete plan—until I mentioned it to a roommate one night. Although my friend sympathized with my disdain for the book, he was more concerned about how I was describing a scene that would not have been out of place at a Nazi rally. I thought of my own contempt for the bible thumpers who had once destroyed batches of record albums just because John Lennon said the Beatles were more popular than Jesus. I realized that in my own small way, I was succumbing to the same temptations as these fearful authoritarian groups. I wanted to get rid of something that challenged my own sense of certainty.

Needless to say, I never did burn The Culture of Narcissism. Nor did I tear it apart, toss it out the window or hurl it into the trash. It remained on my bookshelf for years until it finally disappeared, possibly getting left behind when I moved out of the dorm. My fears were left behind as well. Both time and therapy helped me overcome the terror of what was written on all those fragile pages.

Decades later, it is much easier for me to acknowledge that the social conditions Lasch assailed in the 1970s are even more prevalent today. And just as Lasch prophesized the self-absorbed, media-saturated world we now live in, my reaction to his words was also predictive. While tossing books into the pyre has not quite come back into fashion, banning authors from speaking on university campuses has become all the rage. And in the marketplace of Young Adult Fiction, preventing authors from actually publishing their novels has become another growing trend.

It would be easy enough for me to rail against the censors of our age, to complain about their dangerously limited understanding of the human psyche or lament how little they cherish the value of free speech. But I also know the temptation to destroy whatever challenges my sense of who I am. Those challenges keep coming at us from all sides. The internet practically guarantees that no one will feel truly safe from threatening ideas. It seems that new norms are being established each day while old traditions are going up in smoke.

More than ever, it is vital for each of us to realize that we all have the potential to either kindle the torch that helps us navigate this frightening new terrain or strike the match that sets the world on fire.