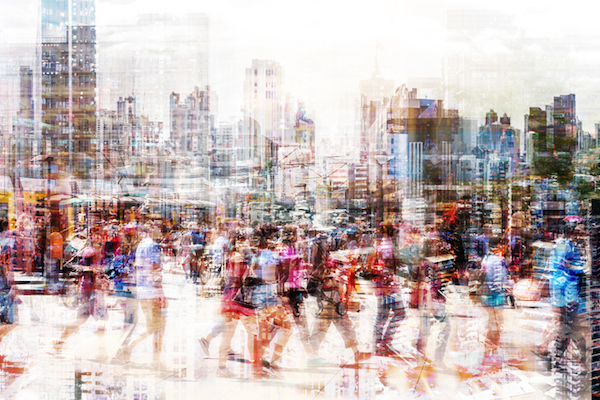 In the classic collection of stories, One Thousand and One Nights, Scheherazade continually escapes execution by telling the King a new story each night. That or a continuation of the previous evening’s cliffhanger.

“All true living in encounter,” said the philosopher Martin Buber. With that in mind, I’ve started paying more attention to brief encounters I have every day. I’ve always believed that if strangers knew each other just a bit more… perhaps the world itself might be a little less in jeopardy. Here, is an installment of what I have come to call, 1001 Brief Encounters.

“What’s taking my brother so long to join us?” I wonder. We’ve gone out for a late dinner and he’s dropped me and our companions off at the door of a Cuban cafe. We’ve been waiting for him for about 10 minutes and we’re hungry. I can see his car parked in the strip mall lot about 50 yards away. I go to investigate, walk quickly up to his open window and with a hint of irritation ask “What’s taking you so long?”

That’s when I discover that it’s not his car, but a similar model parked right next to it. The lot is not particularly well lit, but I can now see well enough to realize that there is a very big and very dark-skinned man sitting behind the wheel. I also realize that had a stranger approached my car under similar circumstances I’d be doing some quick and nervous calculations about a possible carjacking. “Sorry, I was looking for my brother,” I blurt out, hoping to preempt a tense reaction. Fortunately, the man takes my mistake in stride, accepts my apology, and I find my brother in the adjacent spot, fumbling around for something he has misplaced.

Inside the restaurant a few minutes later, I feel a chilly blast from their air conditioner and ask my brother for the keys to his car so that I can get a long sleeve shirt I’ve left there. This time I know which car I’m looking for, but just as I get there just as the other fellow opens his door and steps out.

He approaches me, with a huge grin. “Hello my brother!” he calls out in a booming voice and we share a hearty laugh. My new brother stands about 6 and a half feet tall, weighs in at a solid three hundred pounds and speaks in a deep and resonant Jamaican accent.

This encounter quickly evoked another one, this one in Chicago 7 years earlier. I was there for an extended storytelling tour to 40 neighborhood libraries. While there I sublet a colleague’s apartment, one that I would be sharing with another visitor, a Nigerian physician, who was there on a post-doctorate fellowship. She was researching the genetics of breast cancer. When I arrived at the apartment for the first time it was just after midnight) Prisca greeted me with a joyous bear hug, and invited me to sit down for a home-cooked dinner of a traditional Nigerian goat stew. She had prepared it for me as a welcome feast.

Several weeks later Prisca asked if I would go shopping with her. Several colleagues of hers from Nigeria would soon be coming and she wanted to prepare a to provision their apartment with familiar foods. We headed off to one of Chicago’s southwestern neighborhoods and a market that specialized in African and Caribbean fare. We filled a shopping cart to the brim with staples, as well as and fruits and vegetables some of which I’d never seen before. Then we made our way to the meat counter. I was surprised to see that the butcher was not African but Hispanic. He seemed even more surprised to see me with Prisca. We both watched as his gaze went back and forth between us, almost as if he was watching a ping pong game. Finally, he asked Prisca the question that was baffling him. Pointing to me, he asked. “Is he your husband?”

Prisca didn’t miss a beat. She threw her shoulders back, assumed an almost regal demeanor and replied…” No, No! He is NOT my husband. He is my father!” There was not a hint of humor or irony in her voice. We both observed butcher’s expression telegraph how he was trying to process this startling revelation. He filled Prisca’s order without another word to either of us.

On the drive back to the apartment, I kidded Prisca about her joke.
“No, No, Bob, I was not joking,” she replied. “Your ARE my Father. You are my American father here.” You are an elder, and in my country, we respect our elders. I respect you and what you are doing with your stories, as I respect my father back home. I simply told the butcher the truth!” Of course, the humor of the situation wasn’t lost on her, and for the duration of the trip, and in the years since, I have been proud to have an African daughter!

Back to Florida now. n the moment of our hearty laugh together in the parking lot, I quickly calculated that my new Jamaican brother would appreciate hearing the story of my Nigerian daughter. He did indeed and then kept the stories going as told me of his American daughter… a young co-worker… who as he put it, is as white and whiter as I am black and blacker. As he told it, they have as much fun, introducing each other as father and daughter, as Prisca and I do.

We had another big laugh together and as we parted, I turned to him and said, “THIS, is the world I want to live in!”

Bob explores the intersection of myth and traditional folktales with contemporary issues of family, culture, and politics. He shares the view of the Siberian elder who said, "If you don't know the trees you may become lost in the forest, but if you don't know the stories, you may become lost in life." Seen this way, storytelling is a 21st century survival skill. Bob performs, and serves as a story coach nationwide, helping people find, craft and tell their most important stories.
Website
Blogging

Facebook24TweetPin1EmailShares25
wpDiscuz
0
0
Would love your thoughts, please comment.x
()
x
| Reply
Share this ArticleLike this article? Email it to a friend!
Email sent!