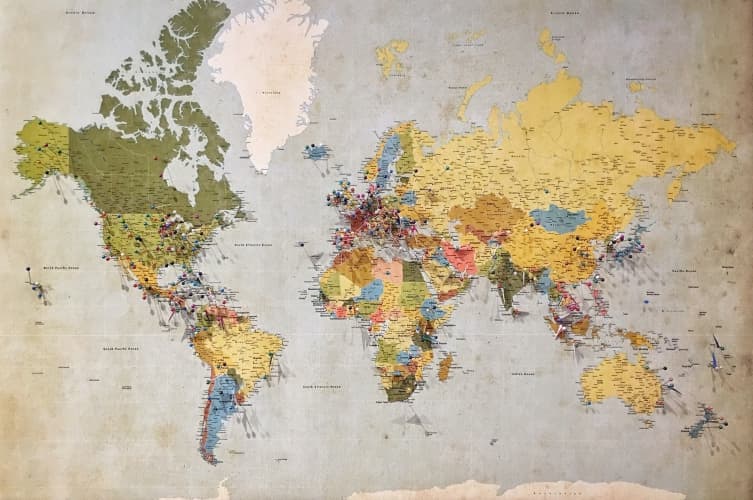 First off, I’m going to say that this article is a little outside of my comfort zone.

I don’t usually write about political correctness or self-awareness, so here goes.

There’s one term that I’ve been hearing increasingly often, and it’s started to get under my skin.

And it’s the word “America.”

Of course, I can’t blame people for using this word, really. I just wish we realized the privilege and implications that we hold behind it. I mean, I used to say this word when I was a kid, back when I barely had any sort of geographical awareness or idea that we’re not even close to being the only country in this huge, mixed-up world.

Here are the types of phrases I’m talking about, in casual conversation:

“OMG, the coronavirus is soooo bad in America right now.”

“You can barely travel outside of America at this point.”

“We speak mostly English in America.”

“UGH, I just want to leave America! I wish I could live in Canada or something.”

“I’m really thankful to live in America, the land of the free and home of the brave.”

(This one was frustrating on multiple levels, but that’s a story for another day.)

And before you say anything — yes, these are real quotes that I’ve heard from real people, between socially-distanced conversations in Target and Facebook arguments and phone calls and backyard discussions with neighbors.

So, have you noticed the common thread in each of these perpetually-irritating quotes?

If you haven’t, I’ll tell you: it’s people’s constant confusion between the “United States” and “America.”

First off, let me state that yes, I do realize that the United States is American territory. Our country is located in the region of America, and I don’t debate that.

And it’s not even just North America! We have South America, too, and Central America, which isn’t formally a continent, but is a distinct region.

The bottom line is this:

If you’re going to talk about America, you can’t just mean the United States.

There’s Canada, Mexico, the Bahamas, Nicaragua, El Salvador, Costa Rica, Belize, Haiti, Cuba, Argentina, Chile, Paraguay, Venezuela — I could name every single other country, but I’m not going to — and countless other places that are located in either one of the Americas, but for some reason, when someone says “America,” it almost always is automatically considered synonymous with the US.

And maybe to you, it’s just a word. But think, for a second, about the implications.

Factually speaking, people who live in Brazil or Ecuador or Peru or the Dominican Republic or Jamaica or Canada are Americans, too. But we’re excluding them (and all other Americans) from the discussion when we forget to remember that the United States isn’t the only country in the whole span of the American continents.

And this is just another example (out of many) of how there are people in the US who have a narrow worldview. Not all United States citizens, of course, but regardless of the number, nothing can make it OK. We’re presuming that just because our country is one of the largest, one of the most populated, one of the biggest trade centers, or even a world superpower — that we have the right to claim the title of America. Even when millions of people were here before us. Even when the founders of America were the ones who intentionally killed, enslaved, and stole from people. Even then.

And think about this: the US is so frequently called “America” that we don’t even have a word for United States citizens. (Like, for Mexico citizens, it’s Mexicans, and for Costa Rica citizens, it’s Costa Ricans, etc.) What do you call a United States citizen? Most people would just tell you that they’re called Americans. And sure, I guess we are. But we’re only one part of it.

They even have words for US citizens in other languages. In Spanish, for instance, it’s estadounidense (or, United-Statesian, would be close to the literal translation). People in other countries or people who speak other languages don’t assume the superiority of this problematic country. But some people in the US (particularly those who are not familiar with systemic oppression) do.

That’s right. Some of us are so United-States-centric that we assume we can use the name of our continent to describe our country; that we don’t really need a title. As if people will automatically know. As if the US is the only country that comes to mind when the word America is spoken.

I could sit here for hours trying to find the words for how nationalistic and egocentric this issue is. It’s not a concept that I can adequately explore in just a couple thousand words.

But writing is about learning, isn’t it? Discussing, exploring, sharing with the world. There’s rarely a day when I log off of Medium and haven’t opened my mind to something new, or gained some knowledge, or broadened my perspective. Writing is an art, but it’s also a form of discourse.

So today, this is what I have to share — the word that’s been bothering me ever since I found out that there were two American continents.

That’s just my two cents. (And that’s in US dollars — not American ones. *wink*)

Writer. Creator. Teacher. Feminist. Just trying to spread love, talk about equity, and become the best human I can be. (she/her)