Get Daily Email
Join/Login CLOSE
Home / Featured Content / Can You Really Make Something New from Something Old? 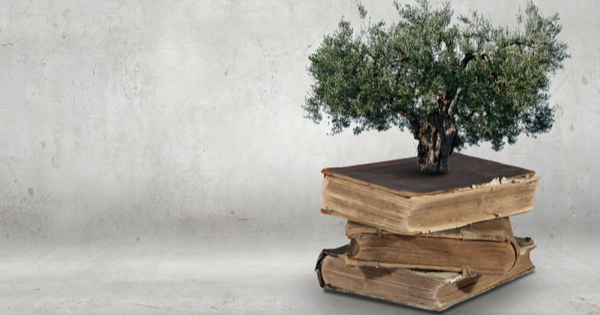 Read, read, read. Read everything—trash, classics, good and bad, and see how they do it. Just like a carpenter who works as an apprentice and studies the master. Read! You’ll absorb it. Then write. If it’s good, you’ll find out. If it’s not, throw it out of the window.

Many years ago, I met with an agent and asked his advice on how I might best develop my writing “voice.” I told him I had been reading a lot of George Orwell and wondered if that was wrong? My concern was that my deep dive (perhaps obsessions is more accurate) into Orwell might influence me, consciously and subconsciously, to mimic his distinctive style. That in trying to write like him, I would lose sight of how to write like me. I’ll never forget the agent’s answer: “If you’re lucky.”

It stung at the time, as I saw it only as a put-down of my writing prowess. But as I matured as a writer, and as a person, I realized what a gift the agent had given me, encouraging me, albeit rather bluntly, to let go of a deluded and most unhelpful pretension I had at that time: that to be unique, to be an original, I should never allow myself to emulate, and certainly not imitate anyone else’s writing. Now, I beg, borrow and steal any inspiration I can get from predecessors as well as contemporaries. And I know I only write as well as I am reading, when I’m immersed in a book of high quality or a story that reaches deep, and I allow all that goodness the author has given to wash into me and, hopefully, use it to help my own work rise.

But there are times when I’m between books or the book I’ve chosen is not one that ascends my creative spirit. Sometimes, in fact, this is by my design. I have read, over the years, books that have the defined purpose of helping me fall asleep. I call these “Ambien Books,” and it’s not meant as a disrespect to an author or the work, but more that the content is interesting enough to distract my mind from the day’s events, but not so much that I keep turning the pages well into night. Usually, these are nonfiction, heavy with history and dense with detail. My all-time favorite in this regard is The Metaphysical Club: A Story of Ideas in America, by Louis Menand. It’s an important, meticulously researched, well-constructed, and expertly written book, but, for my logic- challenged mind, reading it is akin to downing a carbohydrate-laden meal, along with a creamy dessert, and after a few pages it’s a race turn off the nightlight before I pass out.

I’ve also a habit of rereading books, or, more aptly, rereading books by authors I admire, based on my mood. For example, I always turn to Graham Greene when I feel a desire for reflection, his characters, often brooding and self-inspecting, providing a template to fuel my own need to turn inward for a spell. Ernest Hemingway, his stories pocked with men of action, is helpful in righting my ship when I veer toward damaging meekness. And F. Scott Fitzgerald always turns on the kindness and compassion meter so vital for emotional health.

When it comes to the craft of writing, along with Orwell, as mentioned, Somerset Maugham is my greatest influence. After I first read Of Human Bondage (and referenced it in a story (“Graham”) in my collection published by Vine Leaves Press (2016), and then in fast succession, Painted Veil, Moon in Sixpence, and The Razor’s Edge, I decided that Maugham’s prose was without compare when it came to clarity and order, yet it retained beauty and power. After I devoured Ashedon: The British Agent, his collection of World War I inspired spy stories, which were so good that in later years Ian Fleming would base his James Bond on the character, I could no longer write like I did. Thinking my own sentences, a clunky van next to Maugham’s sporty Spitfire, I threw all in and changed my “swing” so to speak, adopting his structure and order of dialogue and narrative, writing story after story until it became natural, and then, as I matured, adding my own voice so it became original.

More recently, as I grapple with creating longer works, thrillers and mystery novels, I tend to read those with the great gift of plotting, such as Ross Macdonald of Lew Archer fame, Eric Ambler, the master of the triple-twist, and Agatha Christie, whose endings come with such a rush, yet so perfectly tied up, that you can’t wait to get on the literary roller coaster again. My gratitude for their gifts, and their sharing them with readers, helps me maintain my own desire to write, when the ideas are not forthcoming, and typing on a keyboard feels as if I’m hacking a machete through think underbrush.

But the trick is to keep going, to draw strength from the past, from the authors, men and women, who came before, and create something new, even if it’s borrowed, which, one day, if you’re lucky, influence someone else.

Facebook27Tweet4Pin2EmailShares33
wpDiscuz
0
0
Would love your thoughts, please comment.x
()
x
| Reply
Share this ArticleLike this article? Email it to a friend!
Email sent!