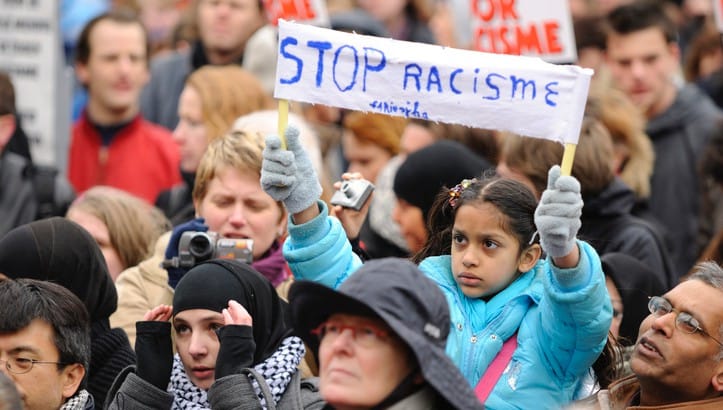 “Daddy?” came the voice from the back seat, delivered with an intonation I had long since come to recognize — one that suggested a question of some magnitude would soon be forthcoming.

“Yes?” I replied, as my daughters and I waited at the red light, halfway between their school and the dance studio they both considered a second home.

“Why is pretty much everyone in this neighborhood black?” inquired 10-year- old Rachel, remarking upon the community through which we had been driving to get to the studio most weekdays for nearly a year at that point.

And what she had asked was indeed an excellent question.

First, because it signified that my ten-year-old was already doing urban anthropology in the back of our Highlander — itself no small feat — and second because as someone who writes and speaks about race and class inequality for a living, it is one of the only questions I am frankly qualified to answer.

And as any parent can attest, we take our victories where we can.

I took a deep breath, quickly gathered my thoughts and tried to arrange a complicated racial and economic history lesson into a form that would make sense to a fourth grader and her sixth-grade sister, seated next to me.

And it was then, as the beginning of an answer reached the top of my throat that I came to know something, which, as an only child, I had never before understood. Namely, that when a younger sibling asks a question of a parent in the presence of the older one, the older one will invariably offer an answer of their own, if only to impress the parent with their knowledge.

“Redlining!” Ashton blurted out, deploying a term I didn’t remember using in her presence before, and prompting me to wonder if perhaps my wife and I had managed to give birth to a sociological savant, and if so, how might we turn this insight into a full-ride college scholarship in a few years?

“I don’t know what that means,” replied Rachel.

“Yeah, I don’t think your sister does either, but that was an excellent guess,” I answered.

As a point of fact, she was a tad bit off, but not by much. Redlining wasn’t why the neighborhood was black, per se. But it certainly helped explain why it was poor. And so began the lesson, which I now had all of three minutes to deliver before we’d arrive at our destination, at which point their attention would be snapped back to fouettes and front aerials, leaving the tortured history of their nation behind for a time.

Briefly, I explained the way that public housing, like that which we had been driving through, had initially been developed for low-income whites, but how around the same time the government created programs to offer cheap loans to those and other whites, so they could buy their own homes away from the cities.

These loans — like those offered under the FHA and VA programs — allowed whites to accumulate hundreds of billions of dollars in housing value. But for the first 30 years of their existence, they had been pretty much off limits to black folks, meaning that people of color were mostly forced to remain in the urban core.

Then, as per Ashton’s comment, banks engaged in redlining — literally drawing red lines on maps around black neighborhoods in the cities. Having done so, those banks would proceed to deny loans to anyone who lived within the line’s boundaries. Regardless of a person’s job, or income or credit-worthiness, those who lived within the borders of the red line were shut out. No home loans, no business start-up loans. Nothing.

In this way, blacks were limited to renting or living in publicly subsidized housing in so-called “projects.” Largely unable to accumulate wealth, black communities often remained poor, even when those who lived there worked hard every day.

All of this history, plus ongoing discrimination in the present — although illegal, I explained, it still happens — has resulted in neighborhoods largely having distinct racial makeups.

Apparently satisfied with the answer, though supremely dissatisfied with the history and present reality of the society in which they lived, they both reached for the door handles, having now arrived at the studio.

As I pulled away I felt good about the answer I’d given them, but was soon snapped back to reality as a sense of dread washed over me. For however much I had been able to answer the question and to provide some context to the phenomena my children could see with their own eyes, how many other parents who don’t know that history — and especially white ones who rarely learn of it — wouldn’t be able to provide the same?

And what will their children make of what they see? Will they stop wondering why certain people live over here and others over there?

No, they’ll still wonder. Curiosity is the coin of the realm for children, after all.

But because they are not born with a sense of history or a sociological imagination to help them understand that which they see, they will fill in the blanks the only way they know how: by resorting to the explanation given them as the more-or-less default position of their society. You know the explanation; we all do. It is Genesis 1:1 in the Bible of Americanism, where speaketh the Lord (or at least Horatio Alger): “Anyone can make it if they try.”

Problem being, when we teach kids this — the cornerstone of our secular gospel — and then they look around, noticing in the process that some have not made it to the extent others have, what do they then conclude? And can we be surprised when that conclusion might be one that serves to rationalize racial and economic inequities? To make them natural, normal, the result of some groups merely being better and others worse, some smarter and others less so, some harder working and others lazy?

Unless parents are discussing inequity with their children, and placing it in its proper sociological and historical context — unless they discuss discrimination and racism, past and present — those children will likely develop an internal narrative to explain the inequities they can see, which will lean heavily towards a prejudicial, even racist conclusion.

It is for this reason that I’ve always found the old saying that “You have to be taught how to hate,” overly simplistic.

Yes, if you’re deliberately taught to be a racist, it certainly makes it more likely that you’ll turn out to be one. But a child can be taught bias — perhaps not hatred, but certainly a form of racism — indirectly too, by combining their recognition of social inequities with the standard message of their society that where we end up on the ladder of life is all about our effort. As such, only color-consciousness (and especially consciousness of the way color continues to divide our society) can prepare children to confront the world around them honestly and effectively.

In this sense colorblindness — that condition most every white person claims for themselves when matters of race come up (that, and the lack of racist bones) — is both an absurd and fraudulent conceit and a destructive force unworthy of emulation even were it possible, which of course it isn’t.

And yet, it’s something about which I hear white parents regularly brag, as if keeping their children ignorant about the world in which they live were evidence of love as opposed to the intellectual child abuse it really is.

But colorblindness doesn’t solve the problem of racism. First, it doesn’t work. Kids see color, and research suggests they begin to draw conclusions about color-based differences early on. As soon as pre-school, children have started to pick up cues about race and gender from popular culture, from parents and peers, such that they begin to form hierarchies on the basis of those identities.

White kids and kids of color both internalize the value placed on skin tone, as demonstrated in a study a few years back, in which white and black children routinely pointed to a paper doll of a white kid when asked with whom they’d rather play were the paper doll a real person, or which paper doll person was nicer, smarter, or prettier.

Second, research has found that encouraging color-blindness makes it harder for children to recognize racism and the racial mistreatment of others. It’s as if avoiding the subject robs them of the necessary lens to understand when someone is being abused for color-based reasons. Not noticing color (or pretending not to) makes it harder, in short, to see the consequences of color, whether on the playground, in the job market, the justice system or classroom setting.

And not noticing the consequences of color is a guaranteed invitation to never solving them, a sure-fire way to ensure that those consequences remain unaddressed and those disparities undiminished.

So while many a parent — particularly white ones — prattle on about how they avoid discussing racism with their kids so as to let them “maintain their innocence,” the innocence of black and brown children is being stolen every day by those who see them as flawed, dangerous, a bundle of incapacity and dysfunction.

And if children of color have to understand what their color means, and how to live anyway, then so must ours.

Because in a nation that has shown repeatedly how little it values black and brown life, things will not change unless we make it so. Justice is not an act of wish fulfillment but the product of resistance.

Black and brown parents know these things like they know their names, and as a matter of survival they make sure their children know them too. And if their children have to know them, then ours must know them as well. If their children are to be allowed no innocence free from these concerns, then so too must ours sacrifice some of their naiveté upon the altar of truth.

Lying to your children about little things, like the tooth fairy, or Easter bunny or Santa, may well be benign. But lying to them about the real world is anything but. It’s time we stop.

A verI tweet and Facebook. My podcast, Speak Out With Tim Wise, is available on iTunes and Google Play, and I post bonus audio commentaries and content at my Patreon page. Speaking engagements are booked through Speak Out: the nation’s premier non-profit speaker’s bureau.sion of this post was previously published on Medium and is republished here with permission from the author.

Facebook180Tweet1Pin1Email1Shares183
wpDiscuz
0
0
Would love your thoughts, please comment.x
()
x
| Reply
Share this ArticleLike this article? Email it to a friend!
Email sent!