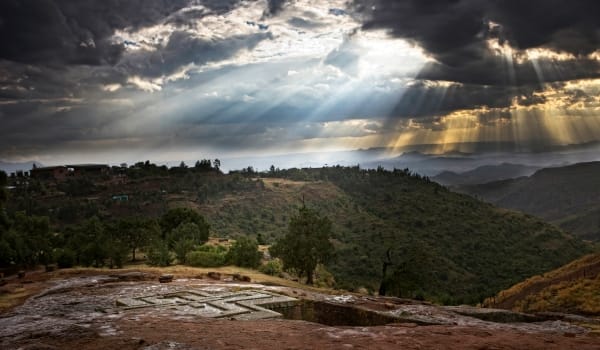 —
Ethiopia – Yesterday Ethiopia began its ambitious 4 billion tree planting program. Ethiopia’s Prime Minister Abiy Ahmed, said the mega campaign will both fight deforestation and climate change. And with a record-breaking 353 million trees planted in the first twelve hours of roll out, it is unsurprising the world’s press have captured the historic day.

But while the country steps up its reforestation efforts, the deforestation of its irreplaceable dry forests continue unabated.

Their apparent lack of charisma may not have helped in their protection: step into an Ethiopian dry forest and you mightn’t even know it. Likely to be more brown than green and without a canopy, its trees are more unassuming short and shrubby than the imposing and majestic ensemble found in the rainforest.

Don’t judge too quickly. This dry forest provides all of the ecosystem services its better looking cousins do in Amazonia and Borneo, including vital water provisions for Ethiopia’s megadams.

And now we know dry forests make up a hulking 80 percent of Ethiopia’s forest cover.

This is according to a new study published by the Center for International Forestry Research (CIFOR), which analyzed the 17 million hectares of Ethiopia’s forest cover. Its distinctly unromantic dry forests- featuring sparsely covered bush, bamboo, scrub and stubby trees- are poorly understood, and poorly managed. Yet they cover an area the size of Uruguay or the state of California, and play an overlooked, important role in Ethiopia’s ecology and economy. The invisibility of dry forests puts them at huge risk, as policies put in place to protect the environment don’t include what they can’t see.

“For most people these forests are not pretty, but they do have an important function,” lead author Dr Stibniati Atmadja says. “That function is to allow water to exist and soils to stay on the ground instead of being swept off by rains.”

WHAT GETS MEASURED GETS MANAGED

Trees for carbon sequestration, for example, is well-documented across scientific research, and so governments draw a simple line from the threat of climate change and protecting forests that sequester and keep a lot of carbon.

Because of its sparse nature, dry land forests sequester much less carbon than dense tropical rainforests. Because of this, the lion’s share of money for forest conservation is poured into rainforests initiatives – despite the ubiquity of dry forests on the ground, and their importance to help people adapt to a changing climate.

Atmadja and her colleagues’ new study goes some way to correcting this imbalance. Until now, it has not been easy for conservationists to define the extent of Ethiopia’s dry land forests. No one – not academics, not local communities, not even the government – knew much at all about the millions of hectares of these unheralded landscapes. Atmadja et al’s new research hopes that now everyone will know and notice. And what gets measured gets managed.

With the knowledge that 80 percent of Ethiopia’s forests are undermanaged, Atmadja hopes that her paper will provide “ammunition” to conservationists who demand more protection for dry forests

Indeed, the future of Ethiopia may depend on it.

Dry forests are everywhere, but that will become nowhere if we do not do more to protect them.

Atmadja describes the economic contribution of dry forests as “invisible”. Her colleague, Dr Abeje Eshete, director of the Ecosystem Management Research Directorate of the Ethiopian Environment and Forest Research Institute, explains that right now, only a few products can be harvested from dry forests, including honey, bamboo and frankincense.

This limitation is not down to the paucity of dry forests, but an artificial restriction imposed by the government who are concerned about the sustainability of the harvest. Eshete, Atmadja and their colleagues are working hard to show that sustainable harvests are not only possible, but an opportunity for economic growth.

“Ethiopia is a net importer of forest products,” Eshete says. “But dry forest resources contribute more in exports. We think there is huge potential here if we can manage the production legally and sustainably.”

Unfortunately, dry forests are still undervalued, and the country lost over 1 million hectares in the period 2000-2013. “Dry forest is difficult to rehabilitate, so it is best to avoid deforestation in the first place,” Atmadja says.

Most of the dry forests are owned by the Ethiopian state, but Eshete explains that the government exerts only weak control over the resources. “The dry forests are subject to open access,” he says, “and that is why deforestation becomes a problem.” Atmadja adds: “Dry forests are everywhere, but that will become nowhere if we do not do more to protect them.”

If you do not have dry forests, rain water moves faster across the landscape…This means less water recharging the rivers, and more eroded soil that fills up dams prematurely. You will have more blackouts.

The Ethiopian economy is one of the fastest growing in the world and Atmadja wants to draw a firm connection between the hydroelectric power plants set to make up 90 percent of Ethiopia’s electricity supply and the dry land forests that protect the water basins that feed the rivers that power the dams.

It is this vital contribution of the dry forests that Atmadja calls “invisible”. For example, the Grand Ethiopian Renaissance Dam, which will become the seventh largest hydroelectric dam on the planet when finished, is located in the region of Benishangul-Gumuz, where 98 percent of the tree cover is dry forest.

“If a country relies so much on hydropower, how can it not protect their watersheds?” Atmadja asks. “We can do so much more.”

“If you do not have dry forests, rain water moves faster across the landscape,” she warns. “This means less water recharging the rivers, and more eroded soil that fills up dams prematurely. You will have more blackouts and shorter life spans of dams.”

RESTORATION IS GOOD, BUT AVOIDING DEFORESTATION IS BETTER

The Ethiopian government has recently committed to rehabilitate, afforest and reforest 22 million hectares of forest by 2030 and, crucially, put the reforestation program under the auspices of the Ethiopian Environment, Forest and Climate Change Commission. Prime Minister, Abiy Ahmed Ali, sworn in just last year, has now sprung into action with his 4 billion tree planting program, which forms a wider ‘Green Legacy Initiative’ policy package for Ethiopia. The overseeing committee will be led by him and chaired by the Ministry of Water, Irrigation and Energy.

“Ethiopia now has a big stake in reforestation, of which there is a clear need,” she says. “People at the highest level see the connection between forestry and water and that makes me optimistic.

Atmadja is pleased that bamboo was included in the recent government definition of forests, including for the purposes of mitigating and adapting to the effects of climate change. “If you exclude bamboo,” she explains, “then Ethiopia will lose an important opportunity to reforest dry areas where many indigenous bamboos can grow.

Although technically a grass, bamboo is probably the most important lowland dry forest “tree” in Ethiopia. Assosa Environment Protection Association (AEPA) is one of CIFOR’s partners in Benishangul-Gumuz and executive director Mengistu Beyessa is co-author of a new paper offering new guidelines for the sustainable forest management of the bamboo that makes up the majority of the dry forests in the region.

It is fair to say that Beyessa is a huge fan. “Bamboo is the ideal solution for climate change because it is fast growing.” he says. “It can reach full height within 3 months, mature in 1 year, and ready for harvest in 3 years.”

Co-author Manuel Boissière, an ethnobotanist with both Agricultural Research for Development (CIRAD) and CIFOR, explains that bamboo also grows well in degraded soil and stops desertification creeping in from Sudan and the Sahara.

Bamboo is also a remarkably versatile plant. For local communities, Beyessa says, bamboo “is everything”. It is the timber they use to make houses and fences, it is fodder, fuel, and even food. “More than 50 percent of lowland forests in Benishangul-Gumuz is bamboo,” Boissière says. “We think it is underused, with big potential, both ecologically and economically.”

Bamboo propagation and management needs to be taken seriously.

But bamboo has an image problem. Boissière says it is considered little more than a weed in Ethiopia’s dry lands, so the market for bamboo goods such as chopsticks, toothpicks, furniture and flooring is not very profitable. What this means is that agro-industry has every incentive to replace bamboo forests with crops like sorghum and maize.

Again, the problem is one of understanding. “Bamboo propagation and management needs to be taken seriously,” Beyessa says. Both Beyessa and Boissière talk of the misunderstandings that accelerate deforestation.

Ethiopian bamboo lives for 35-70 years, whereupon it flowers massively, produces seeds, and dies. This is an entirely natural process, but most people only live for one or at most two flowerings and do not live long enough to fully understand the plant’s life cycle. “When the bamboo flowered in 2010,” Boissière says, “people thought it was a disease, so it became an argument to convert the land to farmland.”

Propagation of Ethiopian bamboo is also a delicate process. Waiting for the bamboo flowering to collect seeds is unpredictable, and perhaps a very long wait. Meanwhile, vegetative propagation can be done at any time. The downside is that estimating the age of the clump is a difficult task, opening up the risk of spending time and money propagating a plant that will flower and die in a couple of years.

Now, how to shoot bamboo to the top spot in public opinion? Beyessa believes the answer lies in building more local, national and international partnerships in order to strengthen the bamboo value chain, increase awareness of the different stakeholders, including local government staff. And importantly, give training to local communities.

To this end, AEPA is currently working to develop a bamboo nursery, which Beyessa hopes will help bamboo forests become more popular, better managed and a sustainable source of income for farmers, businesses and the country. “I am definitely optimistic,” he says. “I always have a positive attitude.

A version of this post was previously published on Forestsnews.cifor.org and is republished here with permission from the author.