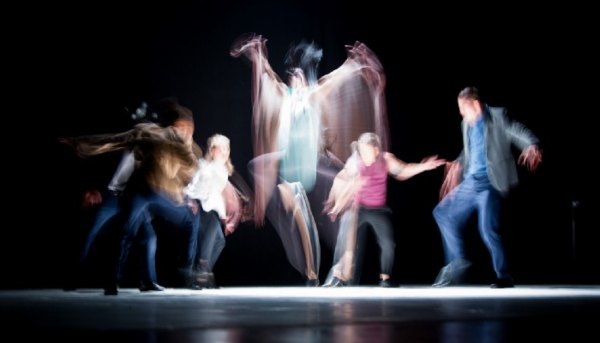 After I got laid off from my job in advertising, a friend who knew I was interested in storytelling told me about a job she thought might interest me. Her theater company was teaching playwriting to middle school kids at a local recreation center. I jumped at the chance. After years spent working to improve the lives of a target audience referred to as the “Global Affluent Tribe,” I was ready for a change.

Teaching, working with kids, playwriting — it was all completely new to me. The first obstacle was getting out of my own head. In the corporate world, I was expected to act like I always had all the answers. Here I had none, and things were moving very fast. Instead of endless meetings planning how to maybe do something eventually, suddenly twenty-five kids were filing into the room, looking at the adults for direction. Feeling lost, I watched the other teachers and tried to do what they did. At first that meant throwing myself enthusiastically into the improv games we played to loosen up. In minutes, I was actually having a blast, hoping my energy would win the kids over. It didn’t. This was a very tough audience. Especially the boys, a few of whom made no secret of the fact that they were only here because there wasn’t enough space in basketball or music.

How could I win them over? Surely I must have learned something in advertising. I went right to their developing brains’ little pleasure centers. There’s a reward at the end, I told them. When your play is finished, we’re going to bring in costumes and props, build the set and then, get this, real actors will perform your plays. But wait, there’s more. If your play gets performed, you get to go to a private pizza party with the cast and crew, up on the roof. I hammered that home every chance I got. Still, it was an uphill battle.

I found myself drawn to this one kid who was quiet, but not because he was afraid of being uncool. There was something different about him. His name was Rufus. He was a big kid with a wide face that gave nothing away. He stayed outside the circle when we did our improv games until Kayla, one of the more experienced teachers, told him he didn’t have to participate, but he did have to sit in the circle. He moved his chair, but when his turn came, the other kids passed over him like he wasn’t even there. This didn’t appear to bother him, and I realized it was because he was on the spectrum. He wasn’t totally non-verbal, but it seemed like maybe he was close. Still, I knew that even if he didn’t talk much, he could still hear and understand the rest of us.

When the kids had moved over to their laptops, I asked him if he wanted to write a play. He looked down at the keyboard without interest, then took a Pokemon book out of his pocket. I didn’t push it. I told him that was fine, he could just read, and to let me know if he felt like writing a play. I was about to remind him of the pizza party, but decided to hold on to that one for later.

Next day, same thing. And the next. The easiest thing would have been to leave him alone, but something wouldn’t let me. I wracked my brain and finally got an idea. Why don’t you write a play about Pokemons? I asked him. It can be about any one of them. It could have battles, explosions. He looked interested…maybe?

Then, the next day, there were words on Rufus’s computer: Garchomp. Charizard, Regigigas, Guzzlord — a list of Pokemon characters. That’s great! I said. Now we just need to figure out what they’re gonna do. What’s their goal? Where’s the conflict? You get to send them on an adventure. My enthusiasm was not, apparently contagious, but I didn’t give up. This could be really fun when the actors do it, with costumes and everything. I let him ponder that and slipped off before the silence got even more awkward.

But when I arrived the next day — I couldn’t believe it — he was sitting with Kayla. Their heads were close together and she was writing down what he was actually speaking. I watched her work with him and I tried to understand why she was able to reach him. My first thought was sure, she’s beautiful. Rufus may be on the spectrum, but he’s still a teenage boy. But it was more than that. She was calm and present in a way I was far too nervous and self-critical to be. I watched them work and let my body and mind absorb some of what was passing between them.

Kayla and Rufus worked a lot over the next few days, but on the last day of writing before the deadline, Kayla had to miss work for an audition. This was crunch time, when the teachers all jumped in and made sure the plays were ready for production. This was my chance to save the day — if Rufus would let me. I told Rufus that Kayla made me promise her I’d help him. Sure, this was stretching the truth, but it had always worked in advertising, and it worked here. Rufus moved aside so we could share his screen. That’s when I saw that his play might present some production challenges. Garchomp was battling someone called Pyukumuku. There were toxic gases, flight and travel to several different dimensions. Whatever. It didn’t matter. I decided that no matter what, I was going to convince the people in charge that Rufus’s play needed to be performed.

I prepared my case in my head. Very few of the other plays made any more sense than his, I’d say. No one could argue with that. And if they said there were a lot of plays, and a limited amount of time and resources, I’d point out that Rufus had really tried, which was more than could be said for most of the other boys. Then, if push came to shove, I’d tell them what I really believed: Rufus doesn’t show it, but I know that seeing his play come to life would mean a lot to him.

When the adults all sat down to finalize the list of plays, an amazing thing happened. Push didn’t come to shove. I didn’t have to persuade the others of anything. They were just as excited for Rufus and his play as I was. No one had any hesitation at all. They were here to support and inspire Rufus, just like they were for all the other kids. This wasn’t a battle, it was a celebration. I put away my armor. There was no fight, because there was no fear. I finally understood what had made this program and the people in it, so special. And then I had the strangest feeling of all — that this was where I belonged.

On performance day, I got recruited to act, along with the professionals. I’d never been in a play before, but I went for it. I played Guzzlord. Unfortunately, this meant I didn’t get to watch Rufus’s reactions. I did spot him in the audience though, with a man I assumed was his dad. Just in my one glimpse of them, I could see how much this man cared for Rufus. And the fact that he was there told me this was kind of a big deal. Seeing them made me emotional, but the play was starting, so I did the only thing I could — I put it all into my performance.

After the plays were over, I helped round up the kids for the pizza party up on the roof. They were all amped. I saw Rufus standing off by himself. Did you like your play? I asked him. He nodded, then he leaned in close and asked me, very softly, At the pizza party, can I meet the actors?

Definitely. I said. I’ll be sure and introduce you.

Man, it’s really true. Actors get all the credit.