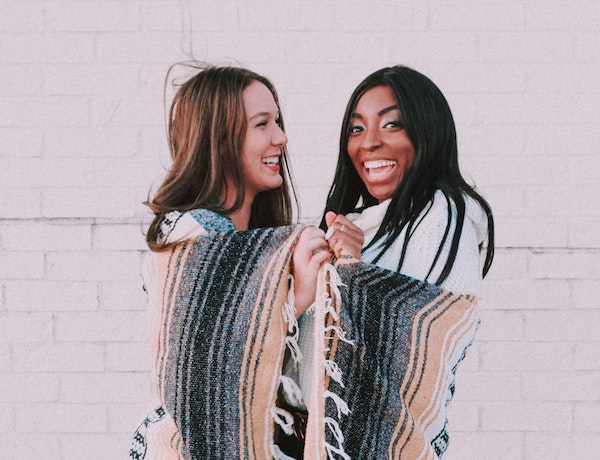 Freakishly fulfilling friendships — what are they? They’re what form when people are shamelessly, selflessly themselves.

When I was about 16, I found a blogger who wrote about:

He put plenty of people off. This guy wasn’t faithful to some watered-down, marketable version of himself — nor even to a niche. But for every taboo part of himself he bared, droves of readers found the sharing helpful.

“If you want the right people to be able to recognize you as a quality match, you must also give others the opportunity to reject you as the most repulsive wretch on earth.” — Steve Pavlina

The man’s name was Steve, and he made his uniqueness extremely visible. As a result, he got more chances to meet people he meshed amazingly well with.

His girlfriend (now wife) was a fellow vegan, raw food enthusiast, and Star Trek geek. Her personal growth passion, personality, and sexuality matched like a 10 with his.

His philosophy was “mutual respect, or disconnect.” He accepted when a social connection wasn’t filled with enthusiasm. This saved time and energy for the home-run, $1,000,000 friendships.

The things I read on this blog changed the way I looked at relationships forever.

Being shamelessly, selflessly myself is a challenge

If you were to list everything about you that’s different or ‘weird,’ how many of those do you feel open about?

Being authentic spoke to me, especially after reading The Transparent Self by Sidney Jourard as a teen. It made me sad people like me had to hide so much. I wished we could all be real.

When I started college as a shy 17-year-old, there were a lot of unchecked items on my list of unrevealed personal weirdnesses. I also had virtually no friends. Besides my neofriends on Neopets, of course. That was the online game I was addicted to.

If I could find pride and become open, I believed it would be to others’ benefit. I wanted to help other people love their gender, their sexuality, and their human failings too. I wanted to build bridges between ideologies so humanity could collaborate better.

Slowly, I’ve turned my secrets into shameless, selfless sharings. This voyage has had its downs and ups.

As a freshman at Prescott College, I wrote a tell-all personal blog post that was so TMI, I had to take it down by the end of the year.

Giving all my secrets away — like that One Republic song — was a big weight off my shoulders though. When my best college friend stayed with me after reading that blog post, I knew we had quite a bond!

Now 10 years later, my transparency and my fulfillment in friendships have grown. I’m open about so many outlandish things in my articles, which helps me be an opener book in person too. I recently had the happiest phone call with my longest-lasting friend yet. She’s a Floridian fellow vegan who works with disadvantaged youth and shares my effusiveness!

Alas, I have miles to go. I hang out online with wonderful writers already, but I struggle to balance work and social time. Next, I hope to bond with creatives within animal advocacy and other niche interests.

I also think if I share my most complex, nuanced thoughts, I’ll make a bigger impact — and next-level friendships!

Being radically yourself and attracting deeply aligned friendships is a privilege

Not everyone has an equal shot at being super open. It’s worth acknowledging. Finding specific friends may be easier when you’re privileged like me.

At the same time, it’s good to take responsibility. We can all have gratitude for our unique opportunities to be authentic. Some opportunities are handed to us; others we forge.

I came from a well-off, queer-friendly family in the U.S., where freedom of expression is pretty good. Having internet and transportation has been a colossal plus. By contrast, our ancient ancestors were basically stuck in their inherited social lives. Thank you, engineers!

I postponed the start of my working life because my dad supported my finances. This class privilege meant I underwent less social and time pressure than some of my peers. They always had a job since age 16 and had to fit in with company cultures. Meanwhile, I could socialize or not socialize freely with whoever I wanted.

However, I made choices too. I’ve taken jobs of an independent nature and switched between them when I got bored. I decided to work part-time animal rights jobs only, despite financial drawbacks. I committed to what helped me feel true to myself.

Being without children, I don’t have to think about how my freaky myselfness would affect them. Never having committed a serious crime, I’m lucky none of my secrets could land me in prison.

I felt guilty sometimes for pursuing shameless myselfness and freakishly fulfilling friendships. I think of people who devote their lives to families, charities, and militaries. Contexts where you sacrifice your uniqueness for a collective.

I counter this guilt by realizing not everyone wants the same as me. Some people don’t mind being more conformist or collectivistic. Many folks seem to blend in naturally with their family or hometown culture. They’re content being less discriminate about friendships.

But many people do want the same as me. They’re just stuck, and scared. For these people, I want to be a real-life model of freakishly fulfilling friendships. Just as Steve Pavlina was for me.

We can radically appreciate the relationships that feel so-so or obligatory. When we do, these relationships often turn out better and more ‘meant-to-be’ than we imagined!

Simultaneously, we can seek our soul friendships. Ones that naturally burst with joy, making gratitude effortless! We can always move in this direction.

Another important takeaway here is that everyone wants to be more themselves. Everyone seeks deeper relationships. No need to fixate on maximizing my own fulfilledness. I can focus instead on helping us all, together, achieve freakishly fulfilling friendships.

Thinking of others is how you build better friendships anyway.

COVID-19 confined us even more to computers. It’s been cause for social complaint. Isolation has brought loneliness, and tech overload has side effects.

But if we can avoid the pitfalls, our online world is a dream come true for deeper connection.

When I lost my job to COVID-19, I took advantage. I wrote. With guidance from my other Floridian bestie (who is a cat-loving yoga teacher and computer programmer), I finally found an online home for my writing.

My whole life, I’d felt terrified as a wannabe writer. I didn’t have a good strategy for sharing my true stuff. I’d feel self-conscious and delete anything I tried to post.

Suddenly, I have over 60 articles published and it feels like no big deal. That’s the power of finding the right venue for creative expression. And finding a few key supporters, or a single encouraging community, who get you started.

How do I plan to proceed with this ridiculous online advantage at my fingertips?

I want to post more about veganism and compassion for animals. Including sharing on social media, and not just in articles. I avoid the emotional difficulty and controversy of animal ethics, but it helps me feel my heart. I’m glad my emotional reward centers align with helping to expand humanity’s kindness.

I also feel transgender issues are an area I can make an impact. My trans posts have always gotten more views. This theme from my life lets me help people like me. I also get to try and bridge those social justice divides that bothered me since before I even left for college.

Such meaningful yet ‘dangerous’ topics lend themselves to freakishly fulfilling friendships. I grew up feeling so isolated as a vegan trans girl that now, bonding over these topics can be grotesquely gratifying.

There is emotional risk involved, no doubt. But when I do successfully bond with people around these issues, the bonds are extra deep. My openness to be deep invites new friends to let me into their depths too.

There’s no substitute to being brave in the real world, even with how online things have gotten. We’ll create freakishly fulfilling friendships through both our footsteps and our keyboard clacks.

So let’s dare ourselves:

We’ll keep being more shamelessly, selflessly ourselves. We’ll support others to do the same. We’ll build freakishly fulfilling friendships during the 2020s and beyond!

The benefits of being shamelessly yourself massively outweigh the drawbacks. What are the main drawbacks? Perhaps some mean messages sent your way. And the benefits? The best relationships of your life.