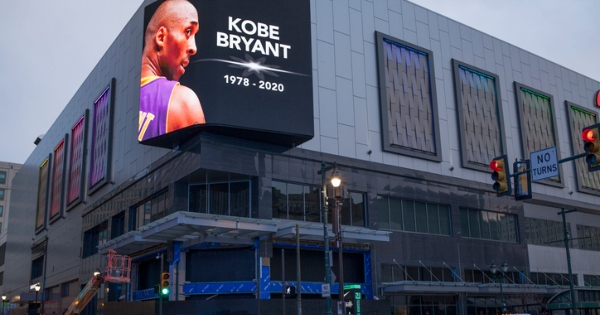 —
The backstory: On January 26, the basketball community and the world was shocked to learn about the sudden passing of both Kobe Bryant, 41, and his 13-year old daughter Gigi. They, along with seven others, were traveling to a youth basketball tournament when their helicopter crashed, first reported by TMZ. Kobe regularly traveled across the LA area by helicopter to avoid traffic.

Gigi was following her dad’s footsteps on the basketball court, while Kobe seamlessly transitioned into a meaningful post-playing life spanning many endeavors.

Over the last year, Gigi’s highlights have surfaced online, and it’s apparent she’s modeled her moves after her dad. Kobe said he would never get into coaching but the future Hall of Famer started coaching his daughter’s select youth basketball team as soon as he retired.

Champion for all: An advocate for the WNBA, last season, Kobe took Gigi’s team to a Las Vegas Aces’ game and introduced them to the Phoenix Mercury.

• “There’s no better way to learn than to watch the pros do it. The WNBA is a beautiful game to watch”, Bryant told the LA Times last year.

Earlier this year, Kobe held a private workout session for top WNBA players for “out of the love of the game”, said LA Sparks forward Chiney Ogwumike.

The father-daughter duo had bonded by attending NBA and women’s basketball games across the country. In a podcast appearance a few weeks ago, Kobe said that Gigi’s interest in basketball is what got him watching the sport again. Recently while at a game, a video of Kobe breaking down a play to Gigi and her grasping it immediately went viral.

After retiring from the NBA in 2016, Kobe found his passion for storytelling. He created Granity Studios, a multimedia original content company telling stories around sports.

First professional athlete to win an Oscar: Less than 2 years removed from basketball, Kobe’s determination and drive (also known as Mamba Mentality) won him a different type of trophy in 2018 – an Academy Award for Best Animated Short Film for Dear Basketball. The film is based on a poem Kobe wrote announcing his retirement from the sport.

• During his acceptance speech, Kobe took a shot at the infamous “shut up and dribble” comments.

Diligent: Kobe wrote, produced and hosted Detail, an ESPN series where he analyzes game film of current players and shares insight, with the hope of making basketball better. The series’ popularity allowed it to expand to include an NFL version hosted by Peyton Manning.

Towards the end of his playing days, Kobe created Kobe Inc. to own and grow brands in the sports industry. His first investment of $6 million in BODYARMOR, a sports drink competitor to Gatorade, was reportedly valued at $200 million after Coca-Cola purchased a minority stake in the company.

Kobe partnered with serial entrepreneur Jeff Stibel to form a $100 million venture capital firm in 2013. The firm’s focus is on businesses outside of sports like media, data, gaming and technology. Their investments include Alibaba, LegalZoom, and media company The Player’s Tribune, the site where the basketball legend published his retirement poem.

Sarang Patel has a background in Product Management with high-growth software organizations and is an experienced technology consultant. He is the owner of a digital publication based out of Texas called Morning Shootaround. The mission is to help casual basketball fans stay informed about the stories and moments from across the sport, making watching games enjoyable and hanging out with hardcore friends more fun. It covers basketball news overlapping with business, style, and culture in a witty morning email newsletter that you can read in 5 minutes or less.

Facebook3Tweet3PinEmailShares6
wpDiscuz
Share this ArticleLike this article? Email it to a friend!
Email sent!