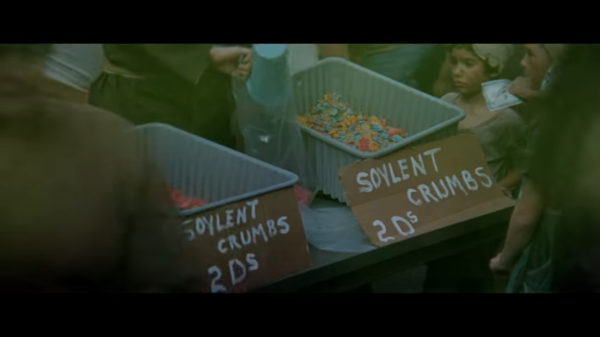 Specifically, Judy wrote about cannibalism in films. She made a list—thirteen movies with cannibalism themes. Although one, Warm Bodies, she describes as a zombie apocalypse movie. If we’re counting zombie films, we need a longer list. Her list includes Soylent Green. Now I’m stuck in nostalgia-land.

I should add a spoiler alert. When I was ten, I saw the trailer. I’m not sure I’ve got my timeline straight, but I think I saw it when I went to the Poseidon Adventure. Or possibly it was the Towering Inferno.  Lot’s of younger people read this blog, I should probably explain what I’m talking about. In the early seventies, the hot genre of action movies was ‘disaster’ films. A ship gets whacked by a rogue wave and capsizes; we follow twelve survivors trying to make their way to safety. A sky rise catches fire, we join a select few inhabitants as they climb higher and higher trying to stay ahead of the flames. Sounds stupid? Those disaster movies were made for preteen kids like me.

When Soylent Green came out, I was relentless. I see my son do this every now and then. If he really wants to do something—and I mean REALLY—he’ll mention it in every other sentence. “Eli, are you good with curry tonight for dinner?”

“Yes, that would give us a lot of energy to go tubing at the ski resort.”

“Eli, excellent job on that test!”

“We should celebrate by going tubing.”

Eventually, in days or weeks, we cave in. I imagine I used this tactic to get to Soylent Green. My brothers are only one and two years older than me. Usually, we all liked the same entertainment. But in this case, neither sided with me in my quest to see Soylent Green. In truth, I think my mother must have been curious about the film. She packed us all up on a Saturday night and took my brothers and me to the movies.

I’m a huge fan of dystopian fiction. I enjoy sci-fi. Looking into the future excites me. I like stories about people surviving by the seat of their pants. But mostly, the requisite worst-case scenario of dystopian stories appeals to me. I didn’t know it at the time, but Soylent Green was my entry point into dystopia.  Set in 2022 (yes, tomorrow), the world is ravaged by global warming and overpopulation. The primary foods for the masses are Soylent Red and Soylent Yellow—meal-in-a-wafer products made from soy beans and lentils. A new product, Soylent Green is added to the mix and is an immediate hit.

Because I was eleven, I can’t remember anything about the plot. I remember snippets of scenes: people charging their single light bulb by riding a stationary bike. A cop stealing a spoon from a crime scene because it is covered in jam. Homeless families living in every doorway. But I remember the movie’s climax well. Charlton Heston’s aging roommate heads off to a euthanasia center to go “home.” Heston follows his friend to the center, and later the trucks leaving the center He learns the grizzly secret… Soylent Green is made from recycled bodies.

The classic scene, really the whole point of the movie, comes in the last minute: Heston, shot, bleeding and dying screams out his iconic line: SOYLENT GREEN IS PEOPLE.

God, my mother was pissed. She found the entire movie offensive. It wasn’t age appropriate. It was, well, gross. My brothers, possibly being truthful, possibly seeing me set me up as an easy target for her wrath, agreed wholeheartedly with her. “Thank God your father didn’t come along tonight! He would have walked out in the first ten minutes.”

I’ve seen a few of the movies on Judy’s list, but none of them had the massive impact on me that Soylent Green did. Possibly no other movie ever has. Because the rest of my family hated it, it was mine. Something that belonged only to me. Those dystopian scenes that remain in my consciousness forty-seven years later gave me a taste of an endless list of movies and books I consume repeatedly to this day.

A version of this post previously published on jeffcann.com