Get Daily Email
Join/Login CLOSE
Home / Featured Content / Athletes’ ‘Killer Instinct’ – In Words. In Pictures. And In Your Face. 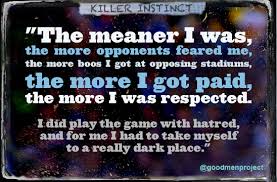 Examining the masculinity of sport—and the meaning of the ‘killer instinct’—through the chilling words of NFL players, past and present.

This post was first published on November 5, 2014.  Over five years later, with another NFL football season ready to kick off in a few week’s, we thought it was worth another look:

I was sitting on my couch watching ESPN SportsCenter last week when I saw a 3 minutes video that made my jaw drop. The purpose of this short feature was to explain the mental metamorphosis that football players go through in order to transform themselves into hard-hitting warriors on the field.

The video was eerie. It had dark music, showed lots of big hits, and included spoken word quotes from some of the best players in the NFL today and of the past.

The words of the players—reproduced below—made my hair stand on end: 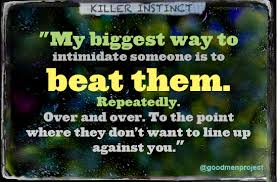 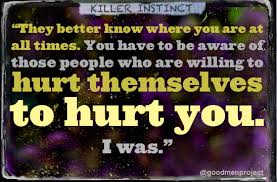 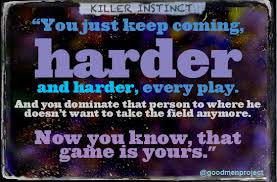 These words raise lots of questions and thoughts:

Is having a “killer instinct” a crucial piece of “being a man”?

Are either of these a bad thing?

Is this how we are building men?

Is this how we are building warriors?

Is this how we are building football players?

Does this sort on-field violence spill over into the outside world?

. . . Because if it sounds like war, that’s because it is; it uses the same techniques, the same words.

How does the hyper-aggresive “killer instinct” play out in other sports?

Obviously it’s there in boxing, or other warrior sports like wrestling or martial arts. But a sport like basketball? Well yeah, it’s there too.  The question gets asked of all the great basketball players: “Does he have that killer instinct?” Like Jordan. Like Kobe. In fact this has been a criticism of the NBA’s Lebron James for much of his career:

“Does he have what it takes to be a champion?”

“Does he have that ‘killer instinct.'” Lebron thinks so:

What separates the great players in any sport is mental toughness and desire combined with physical athleticism, speed, and strength. There is one big difference, however. In a sport like basketball or baseball, ‘killer instinct’ refers more to mental toughness, because unlike in football, the players aren’t working themselves into a froth and launching themselves like projectiles at each other.

By contrast, in football, the term ‘killer instinct’ is quite literal. The players are using their bodies as weapons in order to take down—and often maim and sometimes kill—the enemy. And that’s why it’s so chilling.

What does it all say about us? About our sport? About masculinity?

I’m not yet sure.

But I do know that looking at the violence, hearing players say those words, it feels very scary.

Thank you to  Theresa Byrne and Lisa Hickey for their assistance on this piece.

Sports is confrontation, and confrontation can- and should – always happens with respect.Injuries should be accidents not strategies. The killer instinct should refer to the desire to win, not the uncouth way we do it. Its about closing out a strategic advantage to your own benefit. Firmly and completely, but not unethically. The problem is winning has been awarded too high a salary, to high a price, to much of a ego thing, for mature adults to compete equally. Now we have to be immature, with rage, and behavioural issues, and a willingness to risk the health and well being… Read more »

A friend of mine that I was discussing this with said “I think in any arena where there is a perception of limited resources, there will be people who feel like they need to get an edge. I think “killer instinct” is colloquial shorthand for being willing to embrace that edge. As you point out, that manifests itself more physically, and so more obviously, in football. What I think you miss, though, is that this isn’t the strict provenance of masculinity. I don’t think Mia Hamm or Brittney Greiner would shy away from the concept in the least. Nor do… Read more »

“….99% of men are sitting on their a**es rather than understand a more nuanced and balanced role in society” That’s one of the dumbest, typing for sake of it, i’m just going to articulate as I go things I’ve read in a long time. People come here for guidance and a sense of community. You, with that comment are sullying the site. Think before you type something as unfounded, reckless and stupid, especially on a forum like this. Opinions can be voiced anywhere but bring a better game to the table next time instead of slinging mud at the 99%… Read more »

Most people know me as a nice person. Someone you could walk all over. Always avoiding conflict. But when I played football, whether it was on the field or at the beach I would play as a different person. I remember trying to break someones ankle during a beach football game. I wrapped up the players ankle and spun around like a crocodile. Iʻm not proud of it but it was how I was trained to think. But when does it become problematic? When it leaks off the filed and into your personal life. Which happens a lot to players… Read more »

I agree it is scary. We condition and celebrate these behaviors and words throughout society. Unfortunately, this violence and verbiage extends off the field. Men around the world are lost. They cling to machismo because educational, economic and familial structures are shifting under their seats…..and I say seat, because 99% of men are sitting on their a**es rather than understand a more nuanced and balanced role in society.

FacebookTweetPinEmailShares266
wpDiscuz
5
0
Would love your thoughts, please comment.x
()
x
| Reply
Share this ArticleLike this article? Email it to a friend!
Email sent!