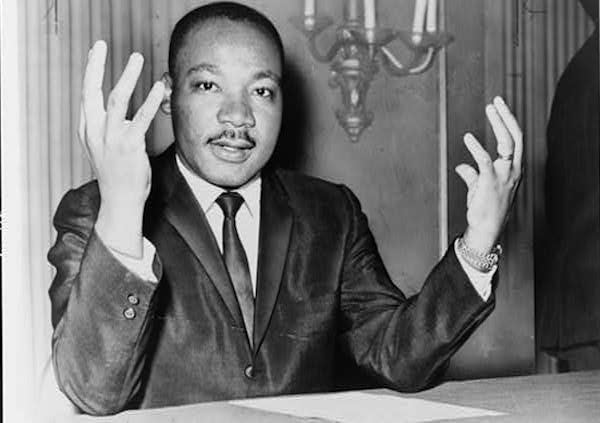 Last year I did a long and detailed study of the life and work of Martin Luther King, so this year I decided to do a review and see what, if anything, my fourth-grade ESL students had retained. Since I personally consider Dr. King to be the greatest public figure that America has yet produced, I was happy to see that my students had indeed remembered the broad outlines of his accomplishments: from the boycott in Montgomery to the protests in Birmingham to the March on Washington. After having a rich discussion about the “I Have a Dream Speech,” I was prepared to call it a great lesson and move on.

Then Carlos raised his hand.

Carlos (not his real name) is a student who can be difficult. One the one hand, he’s a very bright boy who has made tremendous progress in only his second year in the country. On the other hand, he has a bit of an impish streak in him. He likes to tease his classmates for their mistakes and will not hesitate to let his teacher know when he’s bored. When Carlos wants to join the conversation, you don’t know what he’s going to say, but you can be sure it will be interesting.

“I don’t understand,” Carlos said when I called on him. “Is Martin Luther King a good guy or a bad guy?”

Considering his history, you can imagine my immediate reaction.

“Are you kidding me?” I wanted to say. “After all we’ve seen and heard, THAT’S your question.”

That’s what I wanted to say. But I didn’t. I managed to hold my tongue and wait a beat. Then I spoke to Carlos in the calmest tone of voice I could muster.

“Could you explain what you mean by that?” I said.

I’m sure something in my expression conveyed the sense to Carlos that he was stepping into dangerous territory. He shook his head and smiled awkwardly and waved me off, hoping I’d let the matter drop. Even if I were inclined to do so, the rest of my students were not. One after the other they chided Carlos, muttering and groaning that of course, MLK was a good guy.

I could have let it end there. Despite the vogue for open-ended questions, sometimes there just is a right answer: 1+1=2, Earth is the third planet from the Sun and Martin Luther King was a good guy. But I sensed there was something more to what that Carlos had asked. I have long lived by the mantra that there are no stupid questions, only stupid answers. And, as an ESL teacher, I know that behind every utterance, even those that sound like gibberish, there exists a deep hunger for meaning and understanding.

I was determined to understand what Carlos had meant.

I told the other children to hang on and let Carlos speak. Then I waited. I stood at the front of the room and let the digital clock tick away until Carlos was ready to bring the full meaning of his question to light.

“Martin Luther King,” Carlos finally said. “He went to jail a lot. If he was a good guy, why did they put him in jail?”

With those final thirteen words, Carlos managed to convert his question from one that made me furious into one that made me ecstatic. He had given us a chance to discuss the incredible moral complexities of civil disobedience. Instead of allowing the lesson to end with a smooth and safe conclusion, he had opened us up to a more difficult and rewarding inquiry: what should a just person do in a land of unjust laws?